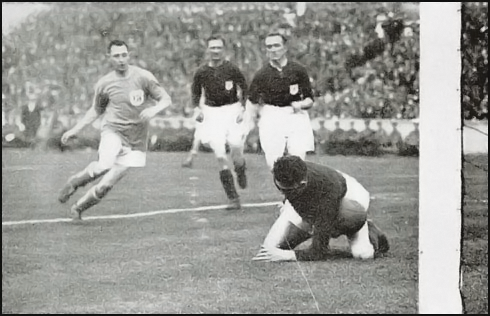 1927 is a famous year for both Cardiff City and Arsenal. For Cardiff City, it was the one and only time the FA Cup has left England. For Arsenal, it was the heart-breaking Cup final defeat that started a new tradition with Gunners’ goalkeepers. And it all started with a Welsh Goalkeeper playing for the Gunners’ called Dan Lewis, Arsenal cup final villain.

Dan Lewis was a goalkeeper who played for a number of clubs in London during his professional career. He was born in the Rhondda Valleys in Wales in 1902, in the small town on Maerdy.

It was a small mining town, as was most of the valleys at this time. He grew up before World War one had broken out. He was too young to fight in the great war, so worked in the coal mines with his father.

Lewis first started playing for local sides in the area before making his way to London, in England. He signed for Clapham Orient (Now known as Leyton Orient after the second World War) in 1923.

Very little information is available about his time at Leyton Orient. However, what we do know is that just a year after signing, the Welshman moved to Arsenal.

Arsenal had just changed their name from “Woolwich Arsenal” to “The Arsenal” 10 years prior. They signed the Welshman in August 1924.

He wouldn’t make his debut until November 15th though, where he started against Everton in a 3-2 win (Of course, in those days there were no substitutes, so if you did not start then you did not play. He played 14 games that season, helping Arsenal finish 20th. The Arsenal narrowly avoiding being in the bottom two, who got relegated that season.

Herbert Chapman and The Arsenal

In the summer of 1925, Lewis’ chances of becoming a regular starter at Arsenal took a hit. The Arsenal appointed Herbert Chapman as their new manager, after he had won the Football League title the season prior with Huddersfield.

Chapman is widely regarded as one of the most influential managers of the 20th century. He innovated the WM formation in which modern tactics are based, in addition to revolutionising modern training and the use of physiotherapists.

Furthermore, he championed the addition of things like floodlights and numbered football shirts among many other things.

Herbert Chapman moved to the Arsenal, despite winning the league two years in a row. This was due to the large crowds that Arsenal would draw in their home matches at Highbury. It was their state of the art stadium they had moved to in 1913. They gave him a £2000 salary, double what he earned at Huddersfield.

One of his first signings at Arsenal was Hibernian Goalkeeper Bill Harper. They paid £4000 for the goalkeeper, which was a huge fee at the time.

Harper became the first choice keep for the next two seasons at Arsenal. They came second in Chapman’s first season in charge, but they slipped to 11th the next season. The Arsenal chairman’s reluctance to strengthen the team can be blamed for the slump.

In the 1926/1927 season, Harper would start 20 consecutive matches in the season. This was until a North London Derby loss against Tottenham Hotspur.

Spurs won 4-2, and Harper would be dropped for Lewis for the rest of the season. Dan Lewis made the most of his chances, and his Arsenal performances were so good he earned himself a Wales call up, and 3 caps for the national side.

Arsenal reached their first ever cup final when they defeated Southampton at Stamford Bridge, in the 1927 FA Cup Semi final.

Charlie Buchan and Joe Hulme scored the two goals for Arsenal, drawing them into a final match against Cardiff City, from the home country of now first choice keeper Dan Lewis.

According to reports, Arsenal dominated the first half. Chances fell to for Gunners but they failed to bypass the stern Cardiff City defence. They went into the first half 0-0 with the Bluebirds looking a tough nut to crack.

Arsenal attacked from the off again in the second half, but Cardiff started to gain more of a foothold in the game, McLachlan finding Davies for a chance early in the first half.

The two sides traded chances until a breakthrough finally came in the 73rd minute.

Cardiff attacked, but a tame shot by Hughie Ferguson was deflected, and it bobbled slowly towards the awaiting Dan Lewis. Reports very on what exactly happened.

Lewis mistake was the only goal of the match. Cardiff City won the tie 1-0, and were presented the trophy by King George V and became the only team to take the cup outside of England. It was there only FA Cup win, coming close in 2008 but losing to Portsmouth.

Lewis, however, was jeered by his own fans. Some suspected he had made the mistake on purpose, in order to get the cup out of England and into his home country of Wales.

He stayed at Arsenal however, playing in every game leading up to the final. He was dropped for the final, however, a decision he would never forget, and would be the catalyst for his move to Gillingham the following summer.

The purported myth after this cup final is this. Because of the brand new jersey causing the ball to slide out of Dan Lewis’ hands and into the goal (if you believe that interpretation), no Arsenal goalkeeper can wear his jersey until it has been washed first.

This myth has been around for years, and while this FA cup blunder is widely reported to have given birth to this tradition, there is little first hand evidence to support this claim.

I have reached out to Arsenal football club for clarification of this event.