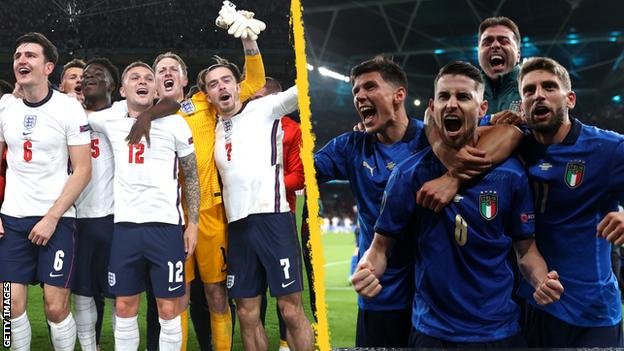 England were beaten in the cruellest way possible as Italy listed their second European Championship.

The Italians held their nerve as they knocked England out 3-2 on penalties, after a 1-1 draw after extra time.

Luke Shaw scored his first ever England goal just two minutes into the final, with a fine finish from an inch perfect Keiran Trippier. The left back has been one of the best players in the tournament, creating the 3rd most chances of all players, and bagging 3 assists for the Three Lions.

England settled into the game well, controlling the pace after the goal and not allowing the Italians to create much. Federico Chiesa was the bright spark for Italy, having a pair of tame long raged efforts saved by Jordan Pickford.

England took their foot off the gas toward the end of the half, failing to create any chances as they marched back into the dressing room, 45 minutes from their greatest day since 1966.

Italy, however, came to spoil the party. They came out of the blocks looking to win their 6th International trophy in their history. They kept possession at an almost obsessive level, boasting an astonishing 71% to England’s paltry 29%.

Italy knocked on the door but failed to create any concrete chances. More long-range efforts were easily saved by Everton’s Pickford. However, the mounting pressure would soon make Gareth Southgate’s side capitulate.

After a scramble from a corner kick, experienced Juventus defender Leonardo Bonucci poked home after a great reaction save from Pickford. It had been coming, and gave England the realisation that they wouldn’t be walking out of Wembley with the Euro 2020 trophy without a fight.

Both sides attempted to score the winner, with both sets of goalkeepers coveting themselves in glory. Donnaruma dominated the air from set pieces for Italy, and showed why he was voted the UEFA Euro 2020 player of the tournament (a first for a goal keeper).

Extra time beckoned as the 90 minutes failed to find a victor.

The following thirty minutes showcased tired legs and tired minds, as neither team came close to breaking the deadlock. A number of substitutes ensues, including some interesting ones from Gareth Southgate.

Southgate brought on next season’s Manchester United teammates Marcus Rashford and Jadon Sancho in the 119th minute. With a penalty shootout beckoning, he brought on the attackers to take their penalties and help England win the shootout.

This would not go as planned for England.

Harry Kane and Harry Maguire scored their penalties for England, with Jordan Pickford trying his best to become an England hero with his penalty saves from Andrea Belotti and Jorginho.

However, Marcus Rashford, with one of his only kicks of the game, took a ridiculous run up with never showed his confidence, and his shot struck the post and bounced wide. Sancho then followed up with a poor penalty, which put England a penalty away from defeat.

Up stepped, bafflingly, 19 year old Arsenal winger Bukayo Saka. The youngster took the 5th penalty, but never looked confident. His effort was saved by Donnaruma, and Italy were declared champions of Europe.

Italy were worthy winners, winning every game en route to the final and, like England, not conceding until the semi finals.

Gareth Southgate will take lots of positives from the tournament, having inspired a nation with some of best memories any England fan born in the last 50 years will ever have. England’s journey to the final, including a historic win over Germany at Wembley, will live long in the hearts and stay with England as they move on to the World Cup next year in Qatar.