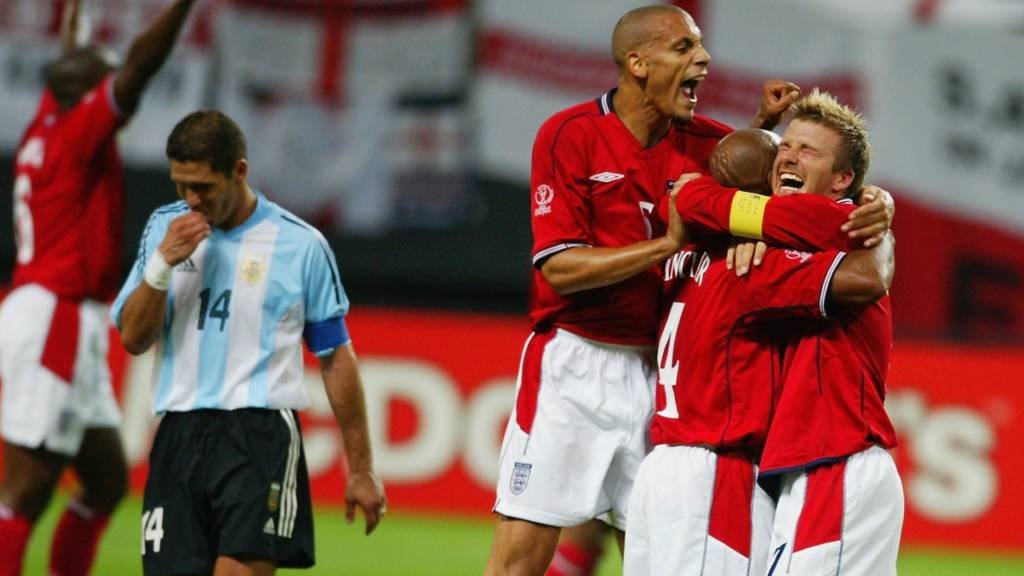 In 2002, Ronaldinho famously lobbed Seaman from 40 yards, starting a joke that will never stop being funny. That goal in the World Cup quarter finals send Sven’s boys packing, sending the England Golden Generation back to a lifetime of mediocrity. England crashed out the 2002 World Cup and the county wondered ‘What could have been?’

I decided to try and change that. Am I better than Sven Goran Erikkson? Almost certainly not, but I know to not play Lampard and Gerrard together in a two, so I’ve got that going for me.

Using the incredible 2001/02 Retro Database for Football Manager 2021, I will guide England through World Cup qualification and see if I can lead the Golden Generation to a trophy after all.

I’m handed an easy qualifying group, or so I hope.

Sweden are my biggest rivals for the qualification. With Celtic legend Henrik Larsson being fed by Arsenal’s Freddie Ljungberg, they have a decent team going forward. This could cause some problems for my team. They’re joined by FM Legend Kim Kallstrom, the former disastrous Arsenal loanee who developed into the best player in the world in previous iterations. Former Villa defender Olof Mellberg starts at the back as well, but the team should cause me much trouble.

They are joined by Albania and Kazakhstan, who’s entire team are made of greyed out players so really if I struggle against them, then I have huge issues.

Greece are the last nation in the group, and actually have some real players. The majority of the names don’t call out to me, although as I have 6 at the time, I probably wasn’t paying much attention to the Greece side.

In the immortal words of Mike Bassett;

It’s a familiar site for England fans, with the two banks of four and two strikers up top.

David Seaman, now 38 years of and the best of a bad bunch in goal, starts. In front of him is two titans of the game, talented Leeds youngster Rio Ferdinand, and Arsenal’s Judas Iscariot himself, Sol Campbell.

The width of the team comes from the full backs. Gary Neville here, arguably at his peak as a footballer. He will work telepathically as he did with Beckham at United, making his long, arduous runs past Beckham, who hits the crosses in from deep. Ashley Cole makes up the other side, the Arsenal defender still yet to hit his prime but better than Wayne Bridge.

The lack of left midfielders is an issue. Owen Hargreaves is put in at the moment as a wide playmaker, sitting narrower as to help keep the midfield compact and leave space for Cole to run into. Joe Cole or Nick Barmby are the two other options in the position, so it’s really just “Who fancies a go on the left today?”

The midfield duo is a hard one to pick. At the moment, Gerrard is partnering Leeds’ Lee Bowyer in the middle. Bowyer boasts 17 in passing,vision and tackling, and 20 in work rate, teamwork, determination, natural fitness, bravery and aggression. His stats are ridiculous and I could not leave him out.

Gerrard is equally good, bit edges it in his long shot and finishing ability, so he’s playing the box to box role in this team.

Michael Owen is the undisputed star of the team. 20 pace and 20 finishing is enough to ignore every other one of his stats, but if you didn’t you’d notice they are all also incredible.

Finding his partner up top is the tricky part. Alan Shearer and Andy Cole both are vying for the starting berth, whilst the likes of Robbie Fowler and Kevin Phillips knocking on the door. I’ve also called up a 21 year old Peter Crouch, because who else do you want on the end of those incredible Beckham crosses?

This is the team to win England the World Cup.

Our first game in the World Cup Qualifiers comes at home to Albania. I am glad. An easy tie to settle me in as England manager. My reign of terror starts here, and tiny European nations shall be the ones to fear my wrath.

Too easy. Albania never stood a chance against the might of St George’s army. Even with the trio of Ashley Cole, Sol Campbell and Michael Owen missing due to suspension, England put Albania to the sword with, smashing six, yes SIX goals past the hapless goalkeeper.

Manchester United striker Andy Cole staked his claim to start with a Hat-trick in my first game in charge. Alan Shearer scored one, a fine header from a floated in cross from back up left back Neil Clement. Beckham blasted a volley into the top corner to make it five, then Kieran Dyer came off the bench to round off the scoring in injury time.

This put us top of the table with a goal difference of +6, just ahead of Greece with their pitiful +1 goal difference. They beat Sweden 1-0 in their fixture, whilst the nature of the five team group meant Kazakhstan have yet to play.

Next time – Sweden (A) and Greece (H), Michael Owen returns to the squad and I decide to put Scholes out on the left (I know).