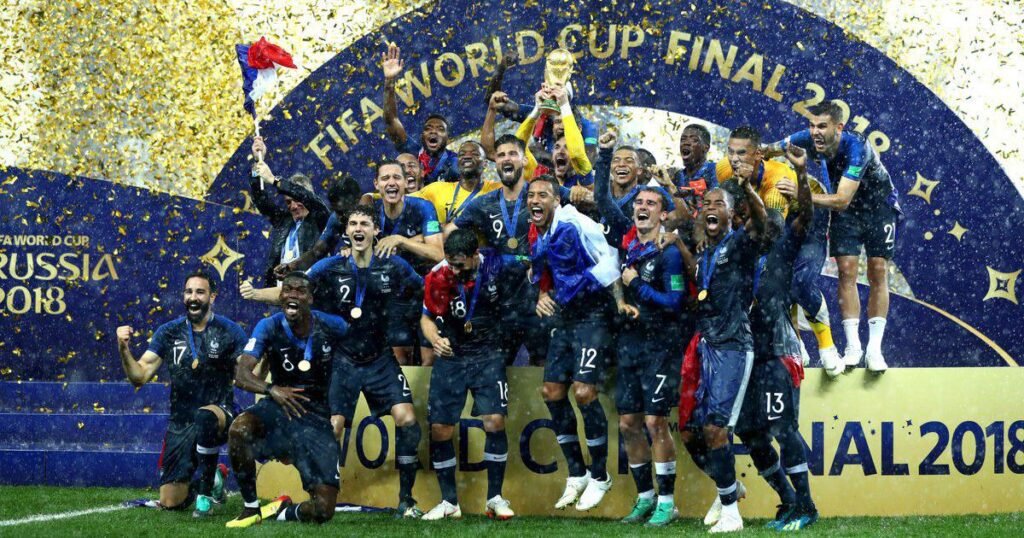 The World Cup is a spectacle held once every 4 years, and features all of footballs superstars. Players and fans come from across the globe to witness sporting’s finest. 32 teams enter, and the cream of the crop is crowned Champion. It is the Football World Championship.

Since 1930, eight teams have been crowned World Champions. France are the current Champions, while Brazil have the record number of wins, with five. England have had a sole winner in 1966, but were considered to be the best side in Europe for years. The travelling Dynamo Moscow side of 1945, however, proved that to be false, and a defeat the Hungary in 1953 changed British attitudes forever.

In the World Cup, Hundreds of teams attempt to qualify, and become the 32 left in the tournament come the summer.

32 teams who battle it out to see who will be crowned the best in the world, and hoist the World Cup high. It crowns the Football World Championship.

But the first World Championship match wasn’t like that. It didn’t involve dozens of countries trying to qualify, playing each other over and over.

There was no tournament to declare the winner. And, if anything, it was even harder to qualify for the first World Championship Match than it is nowadays

The first Football World Championship actually took place on 14 years after the founding of the Football Association.

The FA and SFA both had claims to have the best football teams (You can read about how Scottish teams founded the passing game in Inverting the Pyramid by Jonathan Wilson), so a match was set up to see who was the best club side.

Internationals between the two home nations had been going on since 1870.

FA Secretary C.W Alcock had issued challenges in various Scottish newspapers, for a team of Scots to play England in an International exhibition.

Alcock also Captained England in the matches against Scotland, and founded the Wanderers Football Club, whom he captained to victory in the first FA Cup Final.

The match was set, and on the 5 Match 1870, England and Scotland took place in the first ever International match.

The games, however, are not ratified by FIFA as full internationals. The Scottish team was comprised of only London-based Scottish players, so the top teams in Scotland were not represented.

The first match ended in a 1-1 draw between the two teams, but this was not a game to define the World Champions.

It was simply a challenge made by an influential player who’s contribution to football would be huge. This could be considered the first football world championship.

The first match to billed as the World Championship game was a match between the Scottish and FA Cup winners, in 1887.

The first league championship would begin later that year, with Preston going undefeated and winning the league and FA Cup double.

Aston Villa won the match 3-0, although very little information is available about the match. The Birmingham Daily Mail billed the game as a de facto world championship game, in their April 1887 edition.

Villa were not invited, however, and FA Cup Semi finalists Preston North End were instead invited for unknown reasons.

Preston would go on to be the first ever league Champions two years later, however. They also did so undefeated, being the first invincible side.

Hibs would run out winners in this tie and win their first World Championship.

The London Olympics in 1908 was the first to include an official football tournament. Unofficial competitons had been held three prior games, however.

In 1896, a match was held, allegedly. Sources differ on which teams took part, however.

One source dictates that a Athens XI faced off against a Smyrna XI, but this is alleged to be a mistake that has persisted through time.

Another source claimed that Sports Club Podilatikos Syllogos Athinon, a Greek side, faced off against a side made up of Danish Sailors and Businessmen, led by two Danish footballers.

They were named Eugen Schmidt and Holger Nielsen. They were representing the Danish side Kobenhavns Roklub, and filled the rest of team with Danes who lived in Greece or were travelling for work.

The Danish team were reported to have won, but the score if disputed.

The Greek Crown Prince Constantine forbid the reporting of the match, but not due to the result.

The Danish team romped home to either 1 9-0 of 15-0 win, but due to it’s unofficial classification, the match was forbidden to be reported on by the local and national press.

So one COULD consider the Danish to be the first World Champions – They decimated the opponents in the first Olympic football tournament, but the game wasn’t ratified by FIFA.

The previous World Championship mentioned also wasn’t ratified by FIFA, and was played between clubs, not countries.

It had two countries facing off with each other represented by their clubs. If that is not considered the first football World Championship, then neither can Denmark.

It only featured three counties, and only two matches were played. The Bronze medal match was contested between French club Club Francais and Universite de Brussels.

The French club won 6-2 and handed the Belgium club the Bronze medal.

English side Upton Park (not related to West Ham nor their former Stadium) were the gold medal team. They represented Great Britain, and easily defeated Club Francais 4-0.

The next Olympic games featured only sides from the United States and Canada.

Canadian side Galt FC achieved the Gold Medal. However, neither the 1900 or 1904 Olympic Games are recognised by FIFA, with the first Recognised World Champions coming in London in 1908.

The first Olympic World Champions of football to be recognised by FIFA were Great Britain. It seems apt, as the game itself was invented in Britain that the British would be the first official World Champions.

The tournament was the biggest one yet in the Olympics, and the first to feature the countries themselves. The previous editions had clubs representing the countries, rather than the national sides.

Eight countries entered the competition in London, a record number of entrants. Seven nations were represented, with France entering an ‘A’ and ‘B’ side. Unfortunately, Two of the competitors had to drop out before it began.

Hungary withdrew from the tournament due to the Bosnian Crisis, in October 1908.

Austro-Hungary declared the annexation of Bosnia, whom they had been occupying for the past 30 years.

They were declared to be a part of the Ottoman Empire, and Bosnia were forced to pull out of the Olympic games.

The other nation to withdraw was Bohemia. Bohemia was a country which is now a part of the Czech Republic.

Bohemia had to withdraw from the competition due to political pressure, and had withdrawn from FIFA four months prior to the tournament.

This left just six countries competing for the Olympic Gold. Great Britain, as host, competed in the Games. They were joined by Denmark, Sweden, the Netherlands and two French teams.

The French entering a ‘A’ and ‘B’ team seems odd, but there was a very good reason why they were allowed to.

Great Britain has four countries – England, Scotland, Wales and Ireland (which was part of Britain at that point) – that were able to compete in the Olympics.

The four nations were the earliest Football Associations in the world, and as such hold four seats on the IFAB board.

IFAB stands for International Football Association Board. FIFA recognise the board as residing over the laws of the game, and deciding any law changes in football if they see fit.

The four home nations football associations sit on the board – the FA, FAW, SFA and IFA – as well as FIFA itself. The home nations each get one vote on what law amendments should be made, whilst FIFA is awards 4 votes.

Despite the ability to enter four teams, only one British team entered the 1908 Olympics.

Wales and Ireland refused to enter the tournament. Scotland were denied entry due to not being approved as a FIFA member.

Scotland would join FIFA in 1910, but left in 1928, along with the other home nations. They would re-join after the war to compete in the 1950 World Cup in Brazil.

Great Britain won the gold medal in the 1908 Olympics. They beat Denmark 2-0 in the final match, with Frederick Chapman and Vivian Woodward scoring the goals.

Both teams had been incredible during the tournament, which included Denmark thrashing France 17-1 in a quarter final match.

It showed a huge gulf in quality between the two top sides, but Great Britain, represented by England, would be the first “Official” World Champions.

1930 was a famous year for football, as it was the beginning of the famous World Cup competition. Nowadays, 32 teams battle it out to see who will come out on top, and hold the famous trophy aloft.

Superstars can be made or broken in the tournament. Players like Zinedine Zidane can make themselves immortal, with performances against Brazil in 2006.

Others can make themselves the villains, like David Beckham in 1998. His kick-out against Argentina made him hated in England, as he cost England the match and the tournament.

However, in 1930, it was a much smaller affair. Only 13 teams entered, less than the 16 teams FIFA required before the tournament.

The home nations didn’t make the trip, because they had dropped out of FIFA in 1924 and such were not eligible.

The tournament was held in Uruguay. This was because they were considered the current “World Champions” having won Olympic Gold in 1924 and 1928.

Many nations did not make the trip to South America, due to the days and weeks it would take to take a boat.

Planes weren’t an option back then, so only a long haul boat trip was available for travel.

Uruguay retained their World Championship title in their home country. They topped their group of three which included Romania and Peru.

They then destroyed Yugoslavia in the semi final match, scoring six goals in a 6-1 victory. Fellow finalist Argentina also won 6-1 in their semi final, beating the United States.

They defeated Argentina in the final, winning 4-2 with three second half strikers. This made them three time world Champions, as recognised by FIFA just this week.

They are allowed to wear the four stars above their badge due to this.

So who was the first World Champion? Any of the teams mentioned could be the answer, and people have debated this fact for years.

What do you think? Let us know in the comments! 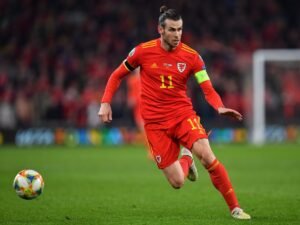 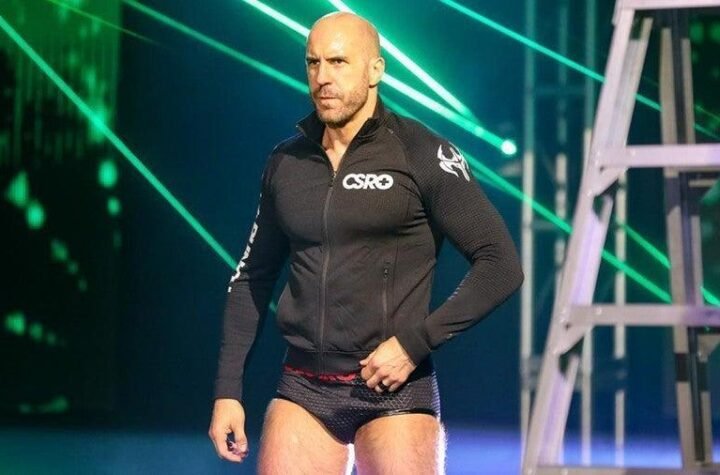