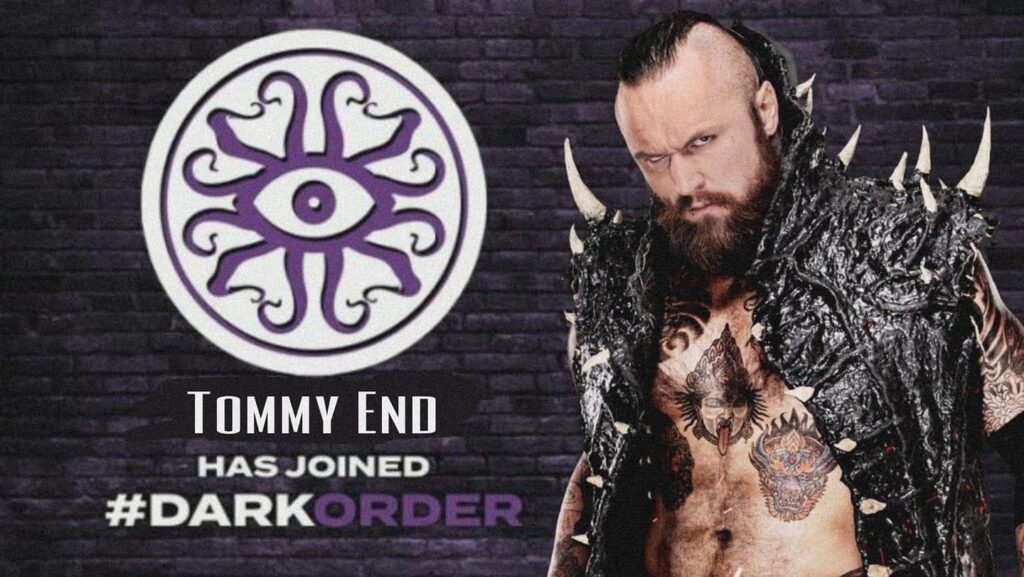 When the news came out today that Tommy End AEW had been part of the WWE releases, most people were shocked. He had just been featured on Smackdown, costing Big E the Intercontinental Championship in recent weeks. His new Dark Father gimmick was just being introduced, and he looked set for a push on the main roster. But today he was released, and the wrestling world is talking about where he should go next. I think that Tommy End is perfect for AEW, and here is why. CM PUNK TO AEW RUMOURS CONTINUE

Since the passing of the talented leader of the Dark Order, Brodie Lee, the group has moved from a cult-like stable to a group of friends helping Hangman Page get over his breakup with Kenny Omega.

A introduction to the Black’s dark arts would be a shot in the arm for the flailing group, and his spooky, devil-like persona would strike fear into everyone who crosses him.

He could even be the man who takes down Hangman Page when he finally wins the AEW Championship. He would enter as the leader of the Dark Order, and take Hangman under his wing, before betraying him once he wins the World Title.

Black would be a supreme Champion in the gimmick of the cult leader, and would move the Dark Order away from their current comedy persona to something more fitting of a main event.

2. Orange vs The New Black

A feud which could be a game changer would be Black vs Orange Cassidy.

The contrast between the lazy, jovial Cassidy vs the intense, brooding and satanic Black would be a match that would be the ultimate in contrasting styles. Stiff, brutal kicks of Black would clash with Cassidy’s hands in pocket, sloth style which would make for an insanely interesting match.

Cassidy has shown he can work in a main event, with the recent Double or Nothing main event showing he has what it takes to face anyone and keep it consistent with his character.

Black has shown he can work with a variety of characters, with his feud with the outrageous Velveteen Dream (Who definitely wont be joining him in AEW), which showed an intense clash of styles.

The feud could show a new side to Black, get eyes on him and help him reinvent himself after his tough time in WWE.

The opportunity to wrestle in New Japan Pro Wrestling is one factor Black would be crazy not to consider.

Since KENTA showed up on Dynamite to attack Jon Moxley, speculation has been rife about who would be the next man through “The Forbidden Door”. Black could be that man.

Tommy End AEW career would certainly be incredible, but there’s nowhere quite like NJPW. The opportunity to test himself against the likes of Kota Ibushi and Hiroshi Tanahashi would be a no brainer for the Dutchman.

Under his former name Tommy End, Black never fought in New Japan, and a trip over to fight in tournament like the G1 Climax could be exactly what he needs to make himself a bigger star than he already is.

Plus, who wouldn’t want to watch Aleister Black get Rainmaker’d, before kicking Okada in the head.

4. Working with his Wife

AEW have reportedly been interested in signing the former Zelina Vega, Thea Trinidad. Thea is married to Black, but the pair have never had the opportunity to work together in WWE.

Vega managed the also released Andrade (who could be making his way to AEW soon) whiles Black mic skills and incredible presence meant he did not require a manager in WWE or NXT.

AEW have a number of Husband – Wife duos, such as Cody and Brandi and The Blade and The Bunny. It would be an interesting opportunity to mix the two clashing styles, and I have no doubt Vega could pull out a great character based on Black’s dark and scary personality.

Tell me, do you think Black would be a good fit in AEW? or should he head somewhere else to continue his wrestling career. Let me know in the comments what you think about Aleister Black AEW rumours.

To check out some of my other posts, click here