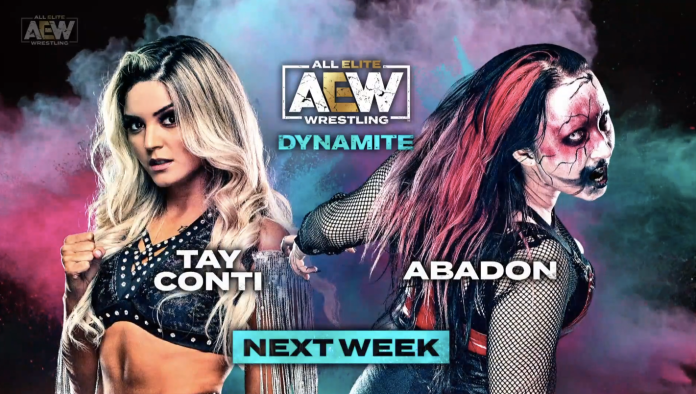 Abadon AEW most terrifying star and is shrouded by mystery. Even though she has an Instagram and twitter, finding info about her is a nightmare similar to her. She never breaks character and has hidden almost all of her social media post that humanize her even a bit, maintaining full-on kayfabe. This has gotten her a lot of respect from fans that enjoy suspending their disbelief while watching wrestling.

Some fans are speculating about a possible tag team partner for her. But why?

Lovers of wrestling’s kayfabe nature almost lost it when they saw that she was featuring in Allie’s (aka the Bunny’s) cookie testing video. They thought that the AEW star was going to break character. However, they were surprised that “living dead girl” stayed true to her demonic ways. The video showed Allie trying out and reviewing a bunch of Oreo cookies with her.

The Bunny and Abadon Have A Good Chemistry

The takeaways from the video were few, but important. Firstly, Abadon likes the Chocolate-Peanut-butter-pie and Lemon flavors of Oreos; which adds new levels to her insanity. Secondly, Allie’s quirky personality along with her terrified expressions, complimented Abadon very well.

This also shows that Abadon can work well in a hilarious situation, as we even saw her smile. Some even say that she said her first word.

Could the Bunny tag with Abadon?

Abadon and the bunny tagging together is something that we can see happening. This is because Abadon isn’t the only demon wrestler that the former TNA knockouts champion has worked with. A couple of years ago, she used to tag with the equally insane Rosemary from Impact. The two teamed up for a couple of months and they worked well together.

This was until a second demonic figure by the name of Su Yung appeared. Yung got into a feud with Rosemary. Allie ended up allying with Yung as she unknowingly sold her soul to her. Allie’s last match in Impact also had her team up with Yung.

With AEW’s partnership with Impact, we could see a possible storyline with Allie being unable to take out time for Abadon due to her Impact duties. This could lead to a highly anticipated feud with Abadon and Rosemary possibly fighting for the right to team up with the Bunny.

Who else can Abadon team with?

With Abadon not being in the women’s title picture, it is safe to say that she could go for some tag team drama. If she doesn’t team up with Allie, she could form a monster heel team with Rosemary. The thing is that Rosemary is currently in Decay, the once-popular stable that was reformed by her and Crazy Steve.

So, there might be a possibility of Su Yung and Abadon making a good tag team. Especially since the former is now back to her evil persona.

Regardless of the shenanigans that Abadon gets into – it is important that AEW protect her character, and don’t let her become the butt of jokes like what happened to Kane in the WWE.