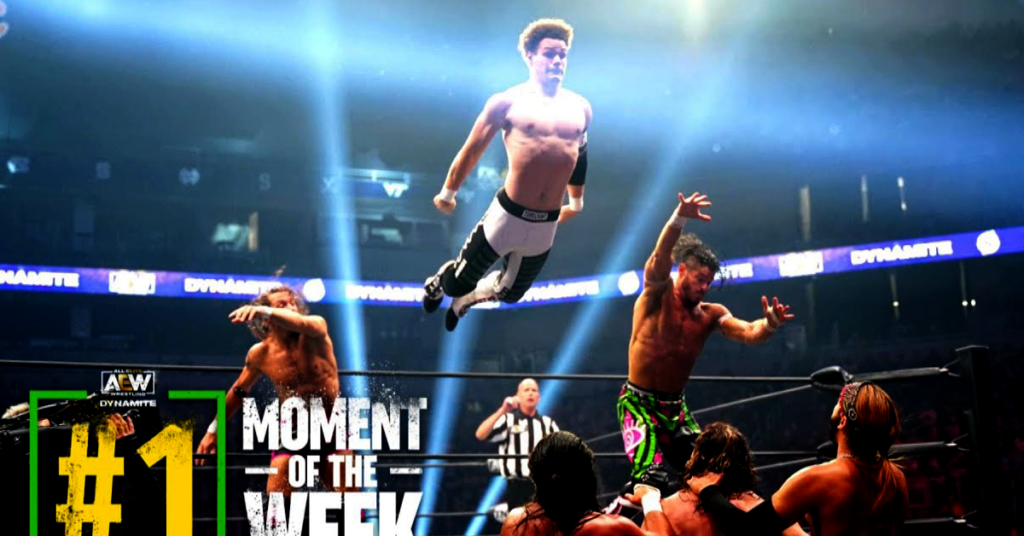 Following on from my article of AEW biggest breakout stars of this year, we look forward to the up-and-comers poised to become a big part of the AEW roster in the next year. AEW has prided itself in pushing young talented wrestlers into stars ready for the main evented. The likes of Sammy Guevara, Jungle Boy, Darby Allin and Tay Conti have all gone from future prospects to main event talent. Here I will talk about the top 5 breakout stars to watch out for in AEW in 2022.

Dante Martin put himself on the map this week on Dynamite, as he wowed fans in a trios loss to the Elite. Martin showcased his high-flying ability against the AEW Champion Kenny Omega and AEW Tag Team Champions the Young Bucks.

Martin turned an indifferent crowd into fans as he leapt into the air and pulled out moves even Rey Fenix would be envious of. He had the crowd waiting with baited breath for his next death-defying move.

Martin was pinned by the AEW Champion Kenny Omega, but looks set to take on the champ in a singles match after impressing in his performance.

He will slip back into the tag division when Top Flight partner Darius Martin is back from injury, and is filling his time with matches on AEW Dark in the mean time.

Wheeler Yuta was rejected by WWE back in may, in a move that shocked NXT talents. However, this was lucky for AEW, as they managed to sign one of the best young athletes in professional wrestling.

Yuta has impressed in AEW, being taken under the wing of the Best Friends. Chuck Taylor, Orange Cassidy and Kris Standlander have been critiquing his matches on Being the Elite and helping him to finally get a win on AEW Dynamite.

He recently looked great teaming with Taylor and Cassidy in a loss to the Hardy Family Office, and looks to be one for the future in AEW, being only aged 24. He recently lost to Darby Allin at AEW Fyter Fest in a match that really put him on the map for AEW fans.

Having recently left MLW to sign full time with AEW, Brian Pillman Jr’s future is looking up. Together with Griff Garrison, Pillman has competed against the likes of AEW Tag Team Champion Young Bucks in high profile tag team matches. Pillman has looked like a future star with his presence and ring work. The Varsity Blondes look set to be a featured team in 2022, with Pillman the star.

Pillman also gained fans with his appearance in the Dark Side of the Ring episode about his father. He came accross as a sympathetic character and has gained a level of understanding from the audience. He has shown great character and personality in backstage interviews with Garrisson. With a bit of polish and experience he can be one of the stars of AEW in 2022.

The intimidating Russian wrestler has made a big impression since signing for AEW in March 2021. She has shoot-style of wrestling that has made her the most dangerous woman in the division.

Hirsch is set to take on the NWA Women’s champion Kamille at NWA EmPowerrr. She has shown her skills in AEW in matches against Tay Conti and Thunder Rosa. Despite being under five foot tall, she has cultivated a dangerous presence around her.Hirsch could be the female Kurt Angle if her potential shines through.

Set to be one of AEW biggest stars of 2022 is not just Hangman Adam Page of the Dark Order. His stablemate, Alan Angels, also known as “V” or “Five”, is a part of the Dark Order, and is one of their performers who works wearing a mask.

V has shown his in ring talents on a number of occasions. He competed in matches against the likes of Kenny Omega, Scorpio Sky and Ethan Page. He has shown impeccable in ring skills, and added some relatable character work with his appearances on Being the Elite.

V is certain to be the one to watch in the Dark Order, and I expect him to break away from the group in the coming year and to spend some time in the main event scene.