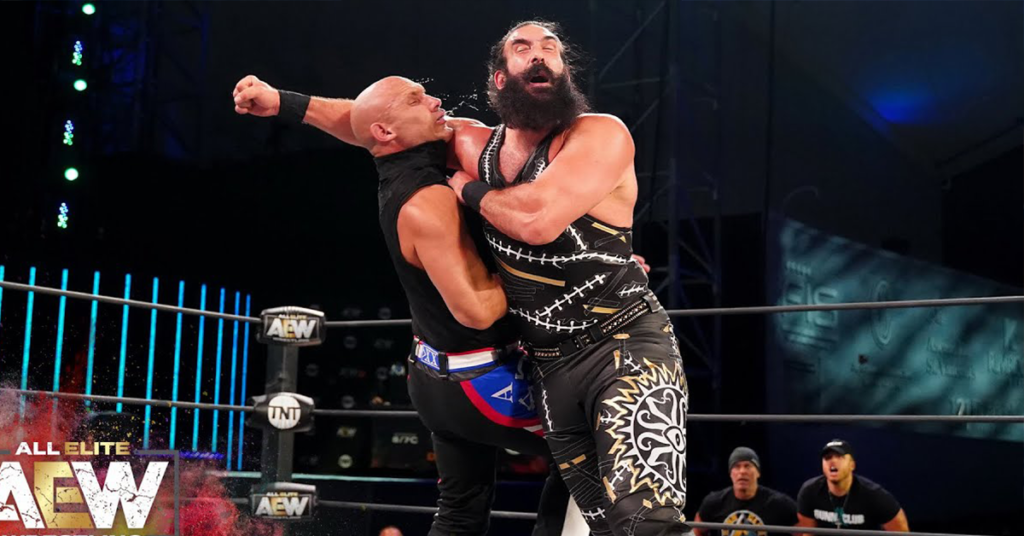 Last Wednesday, the world and a very empty arena was ‘shocked’ as Brodie Lee, formerly Luke Harper, was revealed as the long talked about ‘Exalted One’, the mysterious leader of the Dark Order. The Dark Order. Brodie Lee in AEW could be huge for AEW.

All Elite Wrestling’s mysterious cult that has been recruiting members since as far back as November via their website, www.joindarkorder.com. The Identity of this secretative leader of the faction had been kept secret for months and months, and the hype for the impending reveal had grown to a fever pitch. Big, big names had been rumoured as the Exalted Ones, clues being given to different potential leaders such as Matt Hardy (Who debuted for AEW the same week), DDP, Jake Roberts, Christopher Daniels and Raven.

Brodie has shown in his promos that he is very capable, which having only seen him in the WWE in his run as Luke Harper, I was not aware of. His recent promo, eating copious amounts of meat and his furore at a member of the Dark Order (John Silver, if that’s the guys name, or the other one whose name I have no idea), hinted at being a Vince McMahon type, super alpha male does lots of steroids oh look at me HHH is my real son type of character.

The type of wrestler Brodie Lee is, a big man with big man moves and big man man trousers, is something that is lacking at the moment in All Elite Wrestling. There are a number of great matchups in AEW I’d like to see Brodie take part in, and lo and behold here they are. What luck.

The biggest man vs the biggest dinosaur. Luchasaurus has remained a fan favourite since his debut in the Casino Battle Royale at Double or Nothing, with his tag team partners Jungle Boy and Marko Stunt as the pre-historic wrestling team, Jurassic Express. Brodie Lee vs Luchasaurus could be a huge match that AEW fans would love.

Luchasaurus has shown a distinct lack of quickness in certain aspects of his work, his slow moving kicks apparent when facing faster, more fluid opposition like the Lucha Bros, however this aspect could be more well hidden, or even utilised for effect in a big hoss vs hoss match, with each kick being exaggerated for effect. Lee’s quickness would be used as the difference between the two, as I think outside shenanigans should be kept to a minimum.

This is a match I think that would be a really entertaining one to end a mini feud between the Dark Order and the Jurassic Express, maybe not big enough for PPV but a spotlight match on dynamite definitely.

This is the most obvious match that is going to happen. The entire reveal of the Exalted One was Christopher Daniels being mightily suspicious of who he could be, with some people even thinking that it could have been himself that could have been the Exalted One. The natural conclusion to this is to have a SCU vs Dark Order match, and a Daniels vs Brodie match, as revenge for Daniels denying the Exalted ones existence, pretending to be him and attacking the Dark Order many times.

Obviously Brodie wins this and to be honest I don’t love Daniels but it has a good story behind it so lets go with it Brodie Lee in AEW should be dominant.

While this may seem like a bit of a rehash of the Jericho/Moxley feud, this Cult vs Lone Wolf Moxley feud could go in a bit of a different direction. The Dark Order could not try to recruit Moxley, but see that despite previous efforts he wont trust anyone, so much be destroyed at all costs. And what better way for the Dark Order to grow further and further than to hold the top belt in All Elite Wrestling – The AEW World Heavyweight Championship. Brodie could target Moxley for his title to recruit more members, to grow the Dark Order into something even bigger than the title itself.

Not that I think Lee should bet Moxley for the title, I think Moxley should hold it for a long while before losing it to someone like PAC or Omega. All I’m saying is that they COULD go that way and that hey maybe it wouldn’t be the worst thing in the world.

Page is a star. There’s not getting past that now, he’s one of the best parts of AEW for the last few months and one of my favourite wrestlers right now. In ring, out of ring, in the bar, he is the best.

But, his problems lie with The Elite. He feels left out by his ‘friends’. Banished. Despite being closer with Kenny since the big wins they’ve had together, he no longer feels part of an organistion of friends such as the Elite.

Brodie can try recruit him. Maybe he even does, for a time. Maybe they win the tag titles or just have some big ol’ wins. I don’t know.

But then they implode. Hangman realises one day, maybe when the Dark Order are being down Kenny Omega, or being mean to a horse, what friendship really means, and who his true friends are. And that is when all hell breaks loose.

Hangman vs Exalted one. Book it Tony.

What do you think of Brody Lee AEW Dream Matches?