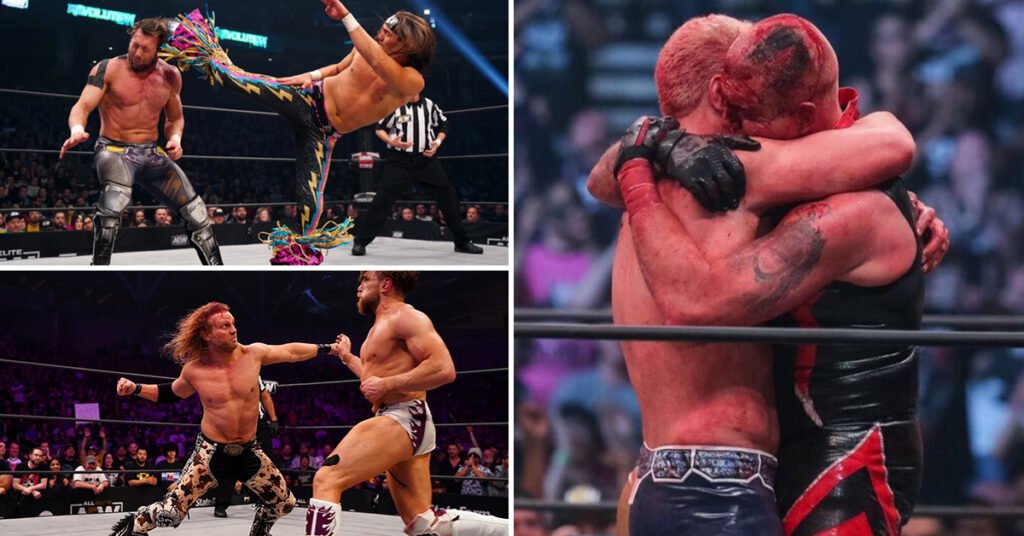 Putting on great matches is what wrestling is all about. People want to pay money to see their favourites wrestling great matches, and the better a match is, the more buzz a wrestler gets.

Dave Meltzer’s match ratings have meant that a lesser known company putting on a great match will get eyes on them simply by him giving them his five star rating. Many wrestlers including Kenny Omega and Will Ospreay have said they value his opinion and look out for his give star ratings after their matches.

While you should not take Meltzer’s rating as gospel, they are handy to see which matches are good and which are bad. If you have similar opinions to him then his ratings will be helpful to you. If not, there are other ways to find good matches.

Cagematch.net is one site where users rate matches, and it aggregates that into a score. This is also good to use to find out good, or bad, matches to watch that may align with your opinions of wrestling.

In this article, we will be looking at which AEW matches Dave Meltzer of the Wrestling Observer has rated five stars.

Cody Rhodes vs Dustin Rhodes – AEW Double or Nothing 2019

The first five star math in AEW history came at their first every show. The long awaited Cody Rhodes vs Dustin Rhodes match was one of the most anticipated match on the show and the brothers had to deliver to help put AEW on the map.

Luckily they used every ounce of talent they had to put on a masterclass. It was a slowly built bloody encounter that showcased both men’s main event credentials. It even had some people call for a Dustin Rhodes AEW Championship run.

The Young Bucks vs The Lucha Brothers – AEW All Out 2019

Both of these teams had a reputation for incredible in-ring ability prior to AEW, and they proved it in spades in their ladder match at All Out 2019. It was the first ladder match in company history and was for the AAA Tag Team Titles.

Both team went absolutely crazy with dangerous spots and incredible high flying action. The match was wrestled at 100mph and features some incredible spots off the top of ladders. Not all of it was well received, with some critisising high-risk moves like the Canadian Destroyer off a ladder and through a table.

However, it is one match you simply cannot look away from and definitely good enough to be AEW’s second five star match.

It was a bit of a wait until AEW’s next five star match, but when it did come around it surpassed the previous ones by far. Dave Meltzer rated the Page & Omega vs Young Bucks match from AEW Revolution 2020 a full six stars, ranking it the highest rated match in the companies history.

The match dynamic was incredible. Page’s friendship with the Bucks had deteriorated, whilst Omega remained best friends with all three. However, he patience with Page was waning and it looked like either man could turn on the other at a moments notice.

However they managed to hold it together for nearly 30 minutes of wrestling. In an emotionally charged bout, they beat The Young Bucks, but that only pushed the future Adam Page vs The Elite story down the rode, which will be mentioned again in this article.

One of my favourite matches ever was the Parking Lot Fight between Best Friends and Santana & Ortiz. It was a brilliant hardcore match that took place in a car park behind the arena that put two of AEW’s most underestimated tag teams against each other in a grudge match.

FTR vs the Young Bucks was a match years in the making, despite both teams being in complete different companies. The Elite spent months building up a potential match with FTR on Being the Elite, with the former Revival even taking a catchphrase of the Elite “Fuck the Revival” as their new name, FTR.

The match was technically sound and had great in-ring action. However, in my view it was really hurt by the lack of crowd. Due to COVID, it took place in front of an empty arena. With 10,000 fans in the arena, I think this would be a much more remembered and highly rated match.

The build for the match was also confusing, with The Young Bucks not making it clear which side of the heel/face divide they were on.

One match which may get overlooked was when Rey Fenix challenged for the AEW Championship. Usually a tag-team competitor, he stepped up greatly when he took on Kenny Omega in 2021, just one week after the Brodie Lee Tribute show episode of AEW Dynamite.

It was the perfect blend of a Kenny Omega match and Rey Fenix match. Incredible athleticism mixed with ridiculous high flying spots, done at a blistering pace, made this match must watch. For my money, Rey Fenix is the most exciting wrestler to watch in the world, and against a “Greatest of all time” contender Kenny Omega makes this a much watch instant classic.

One match that has went under the radar is another match featuring the Young Bucks and Rey Fenix. Fenix and PAC, as Death Triangle, won the first ever tag team Casino Battle Royale at AEW Revolution 2021, earning themselves an opportunity to take on the AEW Tag Team Champions, the Young Bucks.

That match took place on AEW Dynamite and was awarded five stars from the Wrestling Observer. It featured fast paced action, exactly what you’d expect from the four men in this match. PAC and Fenix showed that they could be a top team in AEW, despite losing the match.

The Young Bucks vs The Lucha Brothers – AEW All Out 2021

The Young Bucks continue their dominance over this list with a second five star match with the Lucha Brothers. Two years after their first encounter in AEW, they faced off against inside of a steel cage. It was here where the Young Bucks record breaking AEW Tag team championship reign would end.

This match felt a lot longer than the 20 minutes that it lasted. But, not in a bad way.

The four me crammed in so much into this match that it felt like a 40 minute epic. What other teams would stretch out to 2,3 or 4 matches, they crammed into one of the greatest matches in AEW history.

In my opinion this is the best AEW match of all time. As soon as Bryan Danielson entered AEW, fans were begging to see him square off against AEW Champion Kenny Omega. With two of the worlds greatest wrestlers squaring off, it was almost guaranteed to produce absolute magic inside the ring.

And it did. The pair fought to a thirty minute draw that messed with every emotion you had. It had excitement, jeopardy and even concern for Danielson’s wellbeing. The draw set up perfectly for a longer match down the line with a definitive winner, but even with the incomplete nature of this match, it still got given a 5 star rating from Dave Metlzer.

The culmination of the greatest story in AEW history came at Full Gear 2021. Adam Page had chased Omega and his championship for over a year, with his journey to becoming AEW Champion starting nearly three years before at the birth of AEW.

It was the second Adam Page vs Kenny Omega encounter, one year after Omega pinned Page to earn himself the chance to fight for the AEW Championship. He beat Jon Moxley on that day and held the championship for almost a year, until the plucky young Hangman Adam Page defeated him after a pair of Buckshot Lariats in the main event of the show.

This match from Full Gear 2021 gained five stars from Dave Meltzer, but one that I will say that I think he got wrong. The match was fine and certainly entertaining. The two teams had been feuding for a while and a hardcore match was definitely the right way to go.

The match some brutal spots and all six men went all out. Jungle Boy showed a new side to himself and The Elite were their usual incredible selves. However the match just lacked the excitement that needed to get it over that five star mark. Other matches on the show like MJF vs Darby Allin and CM Punk vs Eddie Kingston deserved the five star marker over this match.

It’s the kind of match you watch once and say “wow, that was good”, and then never watch it again.

The match for the AEW Championship opened the show. This wasn’t uncommon in AEW, who have put their biggest matches as the opening to draw in the fans. However, fans knew something special as the clock ticked past 20, then 30, then 40 minutes.

An AEW match had never before gone a full 60 minutes, and this match looked like it wouldn’t. Danielson had cardio for days, and it looked like Adam Page was done when it came to late in the match. However, Page hit a desperate Buckshot Lariat on Danielson.

He was down for the count, but as he scrambled to cover the former WWE Champion, the bell rang and the 60 minute time limit had run out.

The pair faced off in a ladder match. It was the first singles ladder match in the company history, and they pulled out all the stops to make it the most memorable.

The spots in the match were ridiculous. If the delayed superplex off the top of a ladder wasn’t crazy enough, then Sammy Guevara’s cutter on Cody from one ladder to another, then watching the pair fall 15 feet onto the mat will surely make you think again.