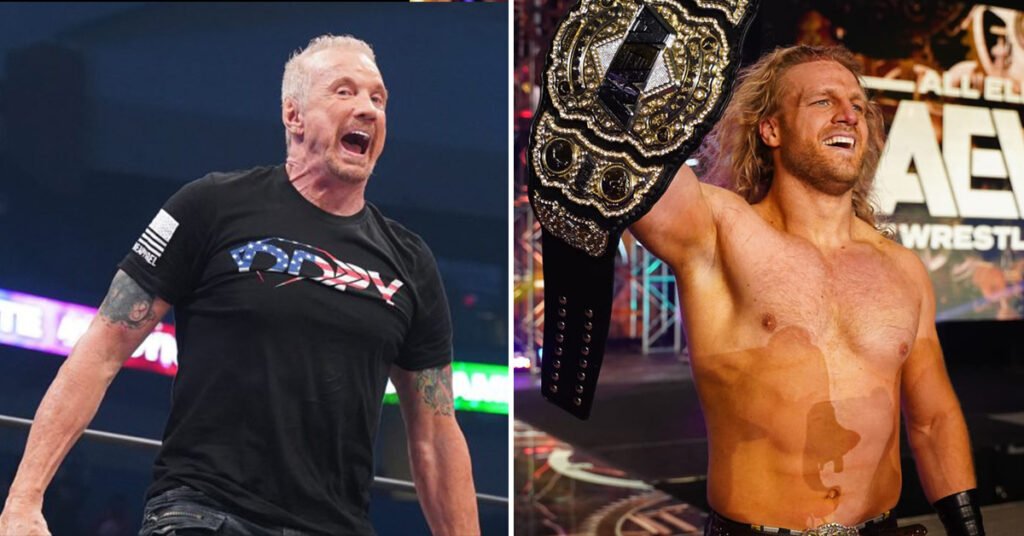 In recent weeks, Hangman Adam Page has proved himself to be a great AEW Champion. He defeated Bryan Danielson on the first AEW Dynamite of 2022 to retain his AEW Championship. His next challenger is currently unknown, but one question still begs to be answered – is Hangman Adam Page related to Diamond Dallas Page (also known as DDP)?

Are Adam Page and DDP related?

The true answer is no, Hangman Adam Page is not related to Diamond Dallas Page. Adam Page is a 30 year old former teacher from Halifax, Virginia. He grew up in Virginia and attended Virginie Tech University. He majored in communications and had aspirations of becoming a filmmaker. However, he eventually went into teaching, but left the profession after finding another creative outlet – professional wrestling.

Adam Page debuted in Ring of Honor in 2011 and soon became friends with The Young Bucks – Nick and Matt Jackson. This helped him find his way into the Bullet Club and eventually joined the pair in New Japan. This is where he met Kenny Omega, and along with Cody Rhodes would form one of the greatest factions of the modern era – The Elite.

Along with the Elite, Page formed All Elite Wrestling, an alternative to WWE. It proved to be a massive success, drawing over a million viewers a week and drawing tens of thousands of fans to their pay per views. Page went on a three year journey to become the AEW Champion, eventually beating his former friend Kenny Omega at Full Gear 2021 to become the fourth ever AEW Champion.

However, he is not the only Page to wrestle in AEW. Diamond Dallas Page and Adam Page are not related but have both wrestled for All Elite Wrestling (AEW). Adam Page, also known as Hangman, has been a consistent member of the roster since it’s debut, while DDP only wrestled once for the promotion.

Diamond Dallas Page was in and around the Elite prior to AEW forming. At All In, the precursor pay-per-view to AEW, DDP was part of Cody Rhodes ring crew, as he walked the former Stardust to the ring for his NWA Championship match.

DDP would later debut in AEW on the 9th episode of AEW Dynamite. He was there to present the winner of MJF vs Adam Page the coveted Dynamite Diamond Ring, a 45 karat ring symbolising the winners excellence. Despite sharing a last name, it was not Adam Page that Diamond Dallas Page presented with the ring. MJF pinned Page to win the match.

However, DDP and MJF scuffled after the match, and that set up a blockbuster match for the next week. DDP would wrestle the team of MJF, The Butcher and The Blade, teaming up with Dustin Rhodes and QT Marshall. It would be DDP’s final ever wrestling match, with him impressing by hitting multiple Diamond Cutters and jumping from the top rope to the outside.

However, his final match would end in defeat. MJF picked up the win as he rolled up QT Marshall to win the match via pin fall. It was DDP’s retirement match and he would formally retire after the match was done. His involvement in the bout made him the second oldest wrestler in AEW history, at the age of 63. The oldest AEW wrestler ever was 67 and you can read about them here.

So, whilst Adam Page and DDP are not related, their AEW careers have intertwined. Diamond Dallas Page was brought in to present the winner of Adam Page vs MJF with the Dynamite Diamond Ring. On another day, he could have been presenting Adam Page with the diamond ring, then wrestling him on an episode of Dynamite.

Both men share the same last name and the same likability to make themselves a star. DDP was the People’s Champion in WCW, while AEW Champion Adam Page the anxious millennial Cowboy, the most relatable character in wrestling today. Sadly we will never see a match between the two in their primes, because it surely would have been excellent.