Who are the biggest WWE stars who jumped ship to AEW?

Three years ago, AEW was announced on the world stage as the newest wrestling in America. Thanks to the minds of Cody Rhodes, The Young Bucks and Kenny Omega, and the money of Tony Khan, All Elite Wrestling was born as an alternative to the boring and stale WWE.

AEW became the most entertaining wrestling show in America immediately upon the debut of AEW Dynamite. It ended with former WWE star Dean Ambrose (now called Jon Moxley) attacking Kenny Omega, a rivalry that was last for over a year.

Since then, many wrestlers have made the jump from WWE to AEW. AEW became the place to be, with their creative freedom and easier schedule being a massive selling point. Wrestlers asked for their release and ran down their deals so they could sign with Tony Khan’s fledgling promotion and helped the Jacksonville-based company rise to the top of the wrestling world.

Here we take a look at 10 WWE stars who made the jump to AEW. We’ll look at the circumstances of their departure from WWE and how they have fared so far in AEW.

Which WWE stars went to AEW?

One of the first stars of WWE to jump ship to AEW was the former Goldust in WWE, Dustin Rhodes. As the menacing Goldust, he was one of the biggest stars of the Attitude Era. His provocative, androgynous character was ahead of it’s time and drew incredible heat from fans in attendance. He won multiple championship and had entertaining feuds with wrestlers such as Roddy Piper, The Undertaker and Booker T.

He teamed with his brother and AEW co-founder Cody Rhodes in WWE, winning two WWE Tag Team Championships. However, he would come into AEW for one reason. To fight his brother. Their long awaited main event singles match, which WWE refused to book, finally took place at Double or Nothing 2020 and was AEW’s first match to get the coveted five star rating from Dave Meltzer.

Since then, Dustin Rhodes has taken on more of a mentoring role. He has teamed with and trained a number of young up-and-coming talent in AEW, helping a number of talent like Hook, Lee Johnson and Anthony Ogogo to learn the art of wrestling.

The first of the two women on this list is Ruby Soho. Formerly known as Ruby Riott in WWE, the leader of the Riott squad was released by WWE in 2021 during the Covid-19 budget cuts, and was immediately snapped up by Tony Khan. She completed the jump from WWE to AEW and made her debut as the AEW Joker Card, winning the Casino Battle Royale.

Ruby Soho earned a chance to face AEW Women’s Champion Britt Baker, but lost to her in a great match on AEW Dynamite. She is currently in the final of the TBS Tournament, and is aiming to become the first woman to be crowned the TBS Champion.

Scott Dawson and Dash Wilder were one of the most underutilised tag teams in WWE history. In NXT they showcased their supreme wrestling ability in matches against the likes of American Alpha and #DIY, becoming two time NXT Tag Team Champions.

However, they were horribly misused on the main roster, and were released from their contracts in 2020. They soon debuted in AEW in May 2020, saving the Young Bucks, who they had been feuding with online, from a beatdown.

It wasn’t long before they tasted tag team gold, defeating Adam Page & Kenny Omega at All Out 2020 to win the AEW Tag Team Championship. They lost the belts to the Young Bucks at Full Gear, before joining up with MJF as part of the Pinnacle, in his feud with Chris Jericho. They have recently been feuding with the Lucha Brothers, winning the AAA tag team championships in the process.

One of the more low profile signings by AEW from WWE has turned into one of their most shrewed. Tay Conti was never a star in NXT, making handful of appearances which showcased a seeming lack of ability in the ring. She was released in April 2020, due to budget cuts because of the COVID-19 pandemic. However, she later claimed she was deeply unhappy in NXT and had asked for her release multiple times, only to be denied.

She debuted in AEW as part of the AEW Women’s Tag Team Cup Tournament. She was teamed with Anna Jay, who she quickly became best friends with, and the team of TayJay still persists to this day.

Over her time in AEW, she has improved in the ring by leaps and bounds. Every week you can see her getting better in the ring, little by little. She has turned into one of the top workers in the women’s division, having a fantastic match against the AEW Women’s Champion Britt Baker at AEW Full Gear.

It’s only a matter of time until Tay Conti becomes the AEW Women’s Champion and becomes the first Brazilian to win a championship in AEW.

When Andrade was released from WWE in 2021, he was immediately snapped up by AEW. After six years in WWE, he signed for AEW and immediately became a headline act for the promotion.

The former NXT Champion engaged in a feud with PAC, having two of the best matches AEW has ever seen. He came out ahead of PAC in those matches, and moved on to feud with Cody Rhodes, siding with the evil Malakai Black.

So far his run in AEW has not lived up to his potential, and has spoken out a number of times about his booking in the past. 2022 looks sure to be the year for Andrade El Idolo, with his matches getting progressively better and better as the months went on in AEW.

He debuted in AEW at the press conference announcing the company immediately feuding with Adam Page. Since then he has had incredible matches with everyone he faces, and is part of Death Triangle with the AEW Tag Team Champions Rey Fenix and Penta el Ciero M.

One of the most original characters right now in AEW is the terrifying Malakai Black. The Satanic superstar has been embroiled in a feud with Cody Rhodes since he debuted in AEW after being released by WWE in April this year. He destroyed Cody twice during their feud and has been one of the most dominant wrestlers in the promotion.

Malakai Black is currently forming his own stable, the House of Black, and looks to recruit Brody King and an unnamed third wrestler as part of his faction.

As mentioned previously, Jon Moxley made his AEW debut at their maiden pay-per-view event, Double or Nothing 2020. He attacked Kenny Omega, Chris Jericho and the referee as he threw away the persona of Dean Ambrose and introduced the world to the violence of Jon Moxley.

Moxley is one of the biggest stars in AEW. He was the second man to hold the AEW Championship, having beaten Chris Jericho at AEW Revolution 2020 for the championship. He held the championship through the difficulty of the pandemic era, but still managed some great title defences against the likes of Eddie Kingston, Brodie Lee and MJF.

Jon Moxley is currently out of action from AEW due to a stint in rehab due to alcohol issues. Before his absence, he was in the midst of a heel turn and looked likely to face Bryan Danielson at AEW Full Gear, for a shot at Adam Page’s AEW Championship. Hopefully when he returns he keeps up his heelish character and has that match with the Hangman.

One of NXT’s greatest ever wrestlers was one of the biggest stars to jump ship from WWE to AEW. Adam Cole was the longest reigning NXT champion ever, holding the belt for nearly 400 days. He won every belt there was to win in NXT, and acheived everything he could on the brand.

However, with a reported contract negotiation with WWE falling through, Adam Cole left WWE after Summerslam as the hottest free agent in wrestling. WWE reportedly wanted Cole to stop wrestling and be a manager for Keith Lee. In addition, they wanted to change his name, which is his brand he has built up for over a decade, due to possible confusion with WWE commentator Michael Cole.

Adam Cole would make the jump from WWE to AEW at the close of All Out 2021, coming out as a surprise debut after Kenny Omega vs Christian Cage. It was a shocking debut which fans never expected, with Cole having left WWE mere days previous.

His debut was slightly overshadowed by the number one person on this list, but since then he has become a main eventer in AEW. He reunited with the Elite as the “Super Kliq” and has recently reformed his NXT tag team with Kyle O’Reilly and Bobby Fish. The impending Elite civil war is impending and it’s not clear who’s side Adam Cole will be on.

When Daniel Bryan walked out to the ring in the main event of Wrestlemania in 2021, few fans could have expected to see him in AEW. However, that all changed at All Out 2021 when he came out to confront Adam Cole and The Elite, and fans blew the absolute roof off the building.

Bryan Danielson wrote a book about his life and journey to becoming a wrestling. Click below to check that out on Amazon. 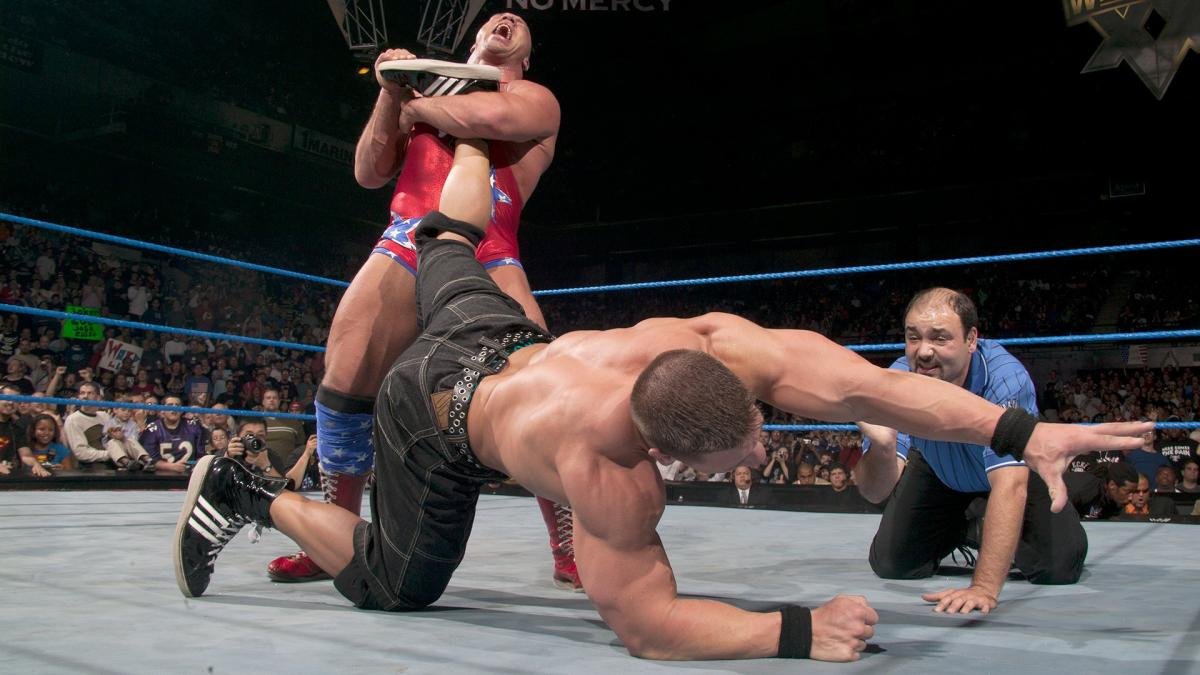