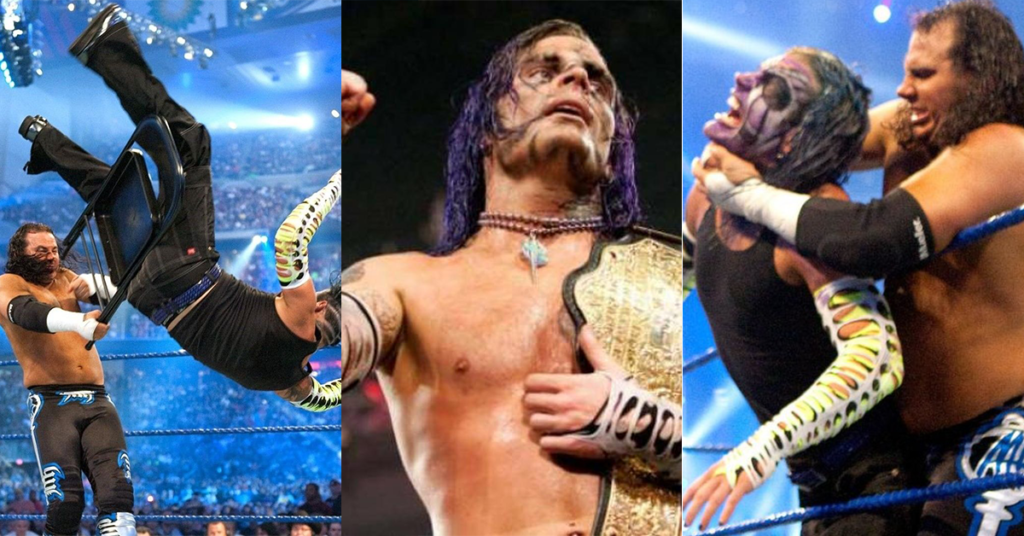 Matt Hardy vs Jeff Hardy. The Charismatic Enigma vs The Broken One

Two brothers, who’s careers are indefinitely linked no matter how far the either flies away from the nest. Jeff and Matt Hardy are two of the most successful brothers in the history of professional wrestling.

From their beginning in their own Trampoline Wrestling Federation, and to forming their Wrestling Promotion, the ‘Organisation of Modern Extreme Grappling Arts’ or “OMEGA”, where they competed under the names “High Voltage” for Matt and “Willow the Wisp” for Jeff, and finding success in the World Wrestling Federation during the Attitude Era, and beyond, the pair have shown an unsurmountable amount of talent and charisma that has translated to a sparkling 20+ year career.

The pair have teamed as the incredible “Hardy Boys” and with Lita as part of “Team Extreme”. Both have also embarked on singles careers. Jeff has had the more glittering of the two. He won winning multiple world Championships and being one of the top wrestlers in the WWE.

Matt, however, has had more a renaissance in his later years. Both men had spells in WWE and TNA. However, here is where Matt became one of the most popular wrestlers in the world with his “Broken Matt” character. He was a deranged character who was possessed by an ancient deity. The pair had a match, dubbed “The Final Deletion” which received rave reviews and innovated the “Cinematic Match” style. This was a match type which both WWE and AEW would utilise for years to come.

The match between the two took place at Wrestlemania 25, which WWE erroneously called “The 25th anniversary of Wrestlemania”. It wasn’t. The 25th Anniversary would be Wrestlemania 26. Your first birthday isn’t the day you were born, is it? Learn to do maths, Vince. (You can view the match on the WWE Network here)

Matt Hardy vs Jeff Hardy was a match people had been wanting to see for a while. While Jeff was a top star and Matt was mainly focusing in on the Midcard, the duo had such great chemistry as tag team partners, then the results in the ring as opponents were bound to be just as good, if not better.

The rivalry began at the 2009 Royal Rumble. Both brothers went into the Pay Per View as recent Champions; Jeff as the WWE Champion, and Matt just after losing his ECW Championship to Jack Swagger on an episode of ECW (The ECW Championship was not considered a World Championship by WWE, but I do. Undertaker was given the option to face the ECW Champion when he won the 2007 Royal Rumble, so it IS a World title) and the duo both had title matches that night.

At the start of the night, Matt Hardy unsuccessfully challenged Jack Swagger in an ECW Title rematch. Matt failedto regain the prestigious Championship. Jeff Hardy, however, defended his World Championship against the Rated R Superstar, Edge. During the match, when Jeff looked to have beaten Edge. Matt turned on his brother, hitting him with a chair and handing the Championship to his former rival (Matt and Edge had a feud in the mid 2000s, where they feuded over Edge stealing Matt’s real life Girlfriend, Lita).

This lit the spark in a deadly feud that brought an intensity to the pair. This included Matt revealing how he messed with Jeff’s pyro to burn him, attacked him backstage and even set his house on fire, killing Jeff’s dog in the process. Matt Hardy vs Jeff Hardy just turned from a wrestling match into a war.

Killing a man’s dog puts Matt Hardy on the level of even the most evil, disgusting heels in wrestling history.

There was only one way for this match to go, and that was violence.