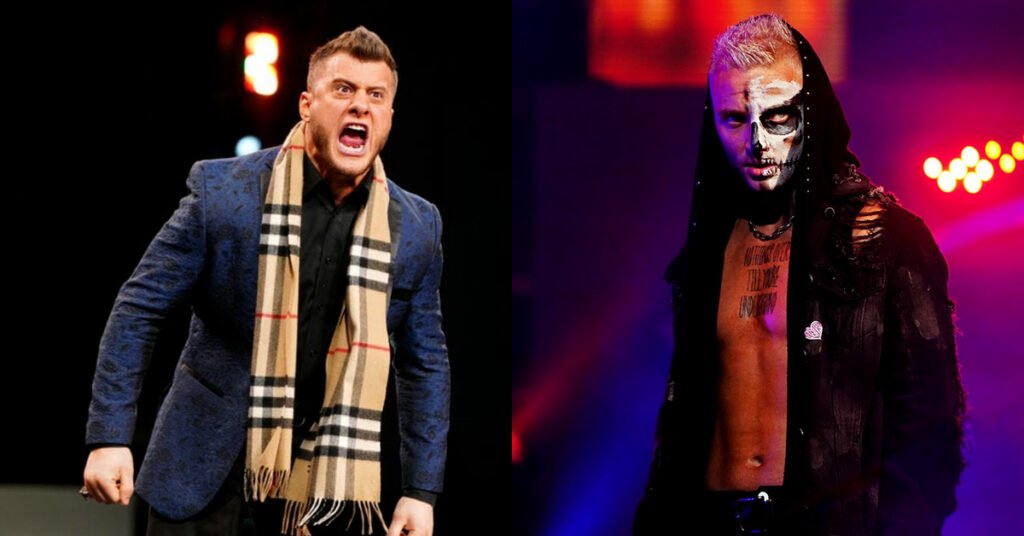 Few people expected a five star bout between Darby Allin and MJF. While fans were excited to see MJF vs Darby Allin, nobody quite knew what kind of match they would have.

Would it be a typical Darby Allin match, with high risk high reward spots and little technical wrestling? Or an MJF match, where he does all he can to cheat to win rather than try to wrestle well.

Well, it was neither. And it was incredible.

The match started in the way that Maxwell Jacob Freidman wanted. MJF had goaded Darby Allin into trying to out-wrestle him. So far, this has not been the young stars favoured tactic. He even claimed that he could beat Darby Allin with a side headlock, a typical rest hold that nobody has ever won a match with.

Allin is known for putting his body on the line to win. As long as it will hurt his opponent more than him he will do whatever it takes.

MJF knew this, and tried to disable his greatest weapon – his fearlessness. However, he underestimated Darby’s wrestling ability. Thinking he was just a one trick pony, he thought Darby couldn’t hang with MJF. Unfortunately, Darby Allin is one of the best wrestlers in AEW.

The opening act of the match featured some breath-taking wrestling from the duo. They traded holds and pin falls at an incredible pace, even paying tribute to Eddie Guerrero, taking spots from his bout against Rey Mysterio at Halloween Havoc 1997.

MJF would get frustrated, gaining the upper hand by hitting Darby Allin with a cheap shot to gain control. However, he got distracted by calling a fan fat on the outside, leaving him open to be hit by an absolute missile of a suicide dive by Darby Allin.

This incapacitated MJF on the outside. At the earliest opportunity, Allin decided to go high risk, high reward. He hit a coffin drop onto MJF onto the outside with a brutal Coffin Drop. MJF then lay on the apron, as Allin tried to end the match with a second Coffin Drop.

However, MJF managed to roll into the ring, and Allin fell back-first on the apron. This is where MJF started working the back of Allin. A number of impressive looking back breakers followed, which looked to injure MJF’s knee progressively.

But here, MJF took a note out of MJF’s playbook. He kept on with the backbreakers, knowing that each time it made his knee worse and worse. He sacrificed his own body to beat down Darby, something Darby has done his entire AEW career.

MJF worked the back of Darby Allin for the rest of the match. The highlight was a brutal and innovative powerbomb backbreaker that looked like it killed Allin. However, he kept popping up again and again, frustrating MJF every time he did.

The pair traded submissions, MJF using the Scorpion Death Lock and Darby Allin using the figure four. Both moves targeted the injured body parts of their opponent, but neither men succumbed to the pain and tapped out.

The match came to a close soon after. MJF hit Darby Allin with a brutal Tombstone Piledriver, spiking his head on the ring apron. The pair then traded near falls with a number of roll ups that popped the crowd hugely.

The Pinnacle tried to interfere on MJF’s behalf, but Sting came out and attacked them with his baseball bat and a chair to drive them away, before leaving himself.

The finish came from some psychological thinking from MJF. Darby was down in the ring but refusing to quit. MJF left the ring, and grabbed the skateboard that Allin rode to the ring on. He got in the ring, with the fans thinking he would distract the referee and hit Allin over the head.

However, he simply rolled the skateboard slowly over to Allin. He then got on his knees, and begged him to hit him in the head.

This would have accomplished two things. The first, it would have given MJF the victory, and moved him up the rankings to hopefully challenge Adam Page for his newly won AEW Championship.

The other, was to prove himself right. That Darby Allin wasn’t good enough a wrestler to beat him in a real wrestling match. That he was just a hardcore wrestler who couldn’t win without putting himself through hell.

Allin refused the skateboard. He knew he was good enough, so handed the board off to referee Bryce Remsburg to dispose of, and keep fighting.

That was Darby Allin’s downfall. With the referee distracted, MJF pulls out his Dynamite Diamond Ring, and hits Darby Allin square in the jaw. He then grabs Allin, and locks in the the side headlock he was so sure he would win with. He then performs a headlock takedown on the now unconscious Allin, and pins him for the victory.

This match was as close to perfect as these wrestlers could have got.

The story told was perfect, with MJF’s attempt to show up Darby Allin only showed everyone that he could not change. Allin came in for a wrestling match, but MJF could do nothing but cheat to win, as he has done his whole AEW career.

The match went 21 minutes, but felt like a much shorter match due to the pace in which these two men worked.

I rank this match as a five star match. It is up there with Danielson vs Omega as the best singles match in the history of AEW, and a highlight in the career’s of MJF and Darby Allin. With both men still under 30, who knows just how good this pair could be in the years to come.

Based on this match, I can see MJF being the man to beat Adam Page for the AEW Championship. I want it to be CM Punk, but if MJF were to dethrone to Hangman, then I would hate him, but I would understand.