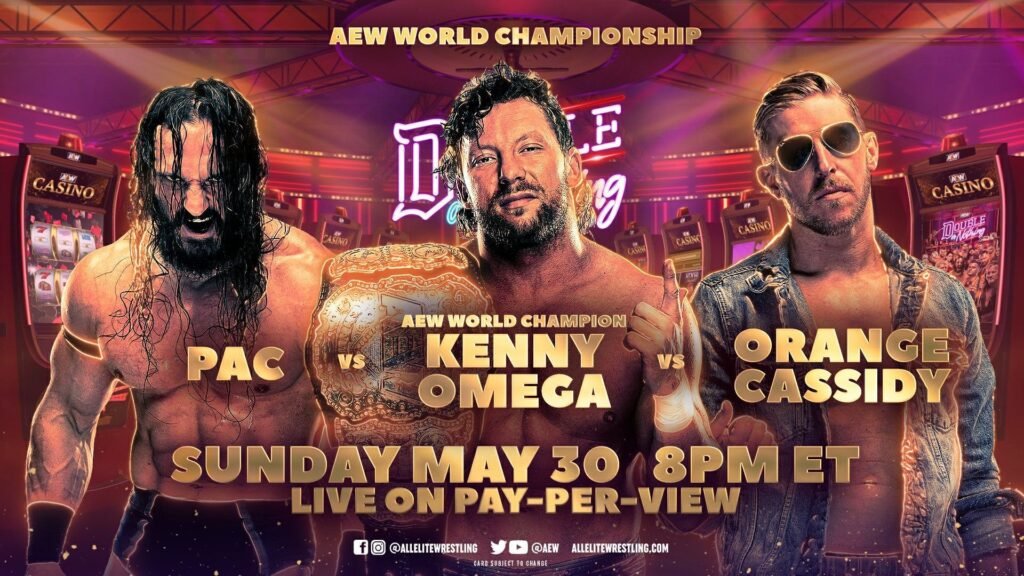 After this weeks AEW Dynamite, the match card for AEW Double or Nothing 2021 has started to build up, and looks to be another great show. The show is set for May 30th from Jacksonville, Florida.

Here is the rundown for the card for the biggest show of the year for AEW.

Despite the worrying ending to the #1 conteder match on Dynamite, the main event for Double or Nothing is looking like an incredible matchup. Cassidy looked knocked out from a powerbomb from PAC on Dynamite. It looked brutal, and the match had to he called on the fly, and Omega had to run in and cause the match to be thrown out. However, this allowed Tony Khan to decide that the match should be a triple threat match instead, the first ever triple threat match for a Championship in AEW History.

With Kenny Omega’s reputation as the Best Bout Machine, matched with PAC’s incredible workrate and Orange Cassidy’s incredible character work, this match should be one to really excite the fans. While the 2 challengers are not ready to be champion yet, in my opinion, they will definitely make believable challengers to make it a drama filled main event.

Also, despite logic, I love Orange Cassidy and really, really want him to win.

PREDICTION: Orange Cassidy pins them both at the same time whilst also kicking PAC in the face as revenge. New AEW Champion.

AEW’s longest reigning champion Hikaru Shida is taking on one of the biggest stars not only in the AEW women’s division, but in All Elite Wrestling alltogether.

Ever since her leg injury last May, Baker has excelled as a top heel in the company, berating her Best Friend Tony Schiavone whenever she gets the opportunity, and bossing around her assistant Reba. Her ring work has come along leaps and bounds also, with all this culminating in an excellent Dynamite main event where she took on Mexican star Thunder Rosa in an Unsanctioned match, in which she lost in one of the best AEW matches of all time.

Hikaru Shida has, in my opinion, disappointed in her title reign, with her lack of prescience of television and lack of promo ability really putting a dampener on a reign which has featured some great matches against the likes of Tay Conti and Nyla Rose.

The duo’s clash is sure to be a highlight in the AEW Women’s division, with this title match sure to be an absolute barn burner between two top stars.

One of the most thrown together matches on the show, really. Hangman Page has been spinning his wheels a bit since teaming up the Dark Order. Maybe it says more about me as a viewer that I preferred to watch him suffer as a sad alcoholic than as a happy man with friends. Maybe I am awful.

However, Hangman was the number 1 ranked contender for a number of weeks. He was due a title shot at Kenny Omega, but had to beat Brian Cage to solidify himself as the top wrestler in the company. Cage managed to defeat Hangman in a big upset, which normally would have Page spiralling out of control. But due to the power of friendship, he’s dealing with it well. He’s asked the Machine for a rematch, and has asked him to not bring Team Taz around, to make the fight fair.

What a lovely chap.

3 thoughts on “AEW Double or Nothing 2021 Matches Confirmed! Preview and Predictions”