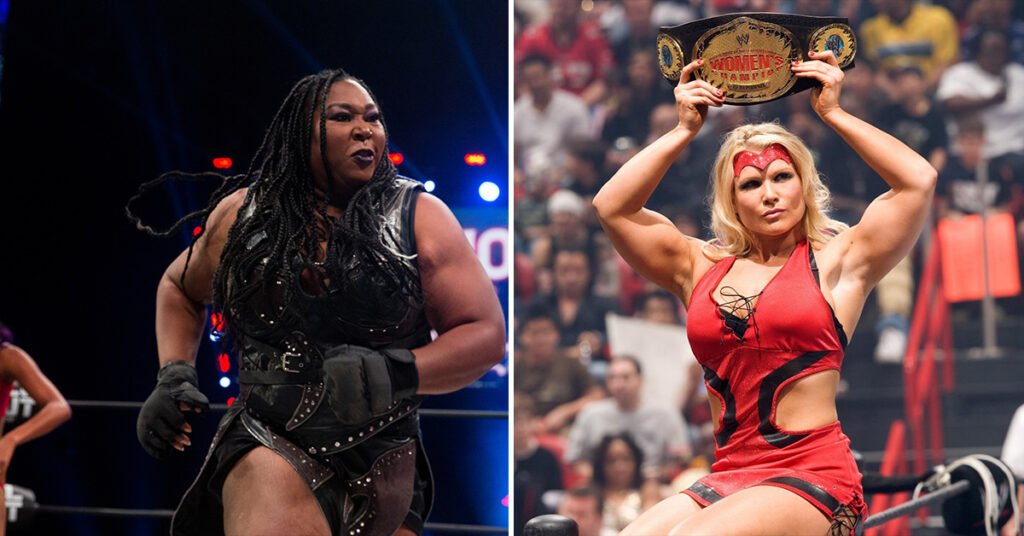 WWE Hall of Famer Beth Phoenix has faced – and beaten – just about every woman she has come up against. She had a legendary run in WWE winning multiple championships, but one dream match always eluded her. Beth Phoenix vs Awesome Kong.

Beth Phoenix returning to the ring?

The Glamazon has recently quit her on-screen role as part of the NXT commentary team. She called her last show last week at NXT: Wargames after three successful years as part of the commentary booth. She became a staple of the yellow brand, having made her commentary debut as part of the Mae Young classic before transitioning to the NXT weekly show.

Outside of appearances in the Royal Rumble and a tag match at Wrestlemania 35, Beth Phoenix hasn’t appeared in an in-ring capacity since 2012. Despite this, rumours persist of her leaving the commentary desk as a sign of her training for an in-ring return to WWE. With her husband Edge returning last year from a nine-year retirement, her chances of returning seem a lot high than previous years.

There are a number of dream matches the former WWE Women’s Champion could be involved in if a potential return to the ring. Matches against the likes of Sasha Banks, Bayley, Charlotte Flair and Becky Lynch would be blockbuster matches that have potential to main event a WWE pay per view.

However, one dream match that the fans rue that they never got to see was Beth Phoenix vs Awesome Kong.

On his podcast “Wrestling with Freddie“, former WWE writer and Hollywood actor Freddie Prinze Jr revealed that Phoenix was planned to have a single match at Wrestlemania 28. The Glamazon had never had a singles match at Wrestlemania, with it being a rare occurrence for a female star prior to the “Diva’s Revolution”.

Beth Phoenix was supposed to wrestle TNA legend Awesome Kong at Wrestlemania 28, according to Prinze Jr. She signed for the company in late 2010, before making a handful of appearances in 2011 following Wrestlemania 27. She was renamed Kharma and was set for a huge push in WWE.

However, she soon fell pregnant and suffered a miscarriage, causing her to be taken off TV and put on the shelf indefinitely. She only had one match in WWE, making a surprise return in the 2012 Royal Rumble, eliminating Michael Cole.

Because of her medical issues, she was put on the shelf by WWE and the plan for the match with Beth Phoenix was dropped.

However, Freddie Prinze Jr revealed the original plan for Awesome Kong, had she have been fit to wrestle her full schedule in WWE.

She meets Natalya and Kong beats her but then goes off after the bell which brings out Beth Phoenix. Now the story couldn’t play and ended up not going because she ended up leaving the company.

Beth Phoenix looks set to return to the ring, as part of the current Edge vs The Miz Storyline.

With Maryse making her return to WWE with the Miz recently, it looks like a mixed tag team match, with Beth Phoenix tagging with her husband Edge against the Miz and Maryse looking to be the most likely outcome.