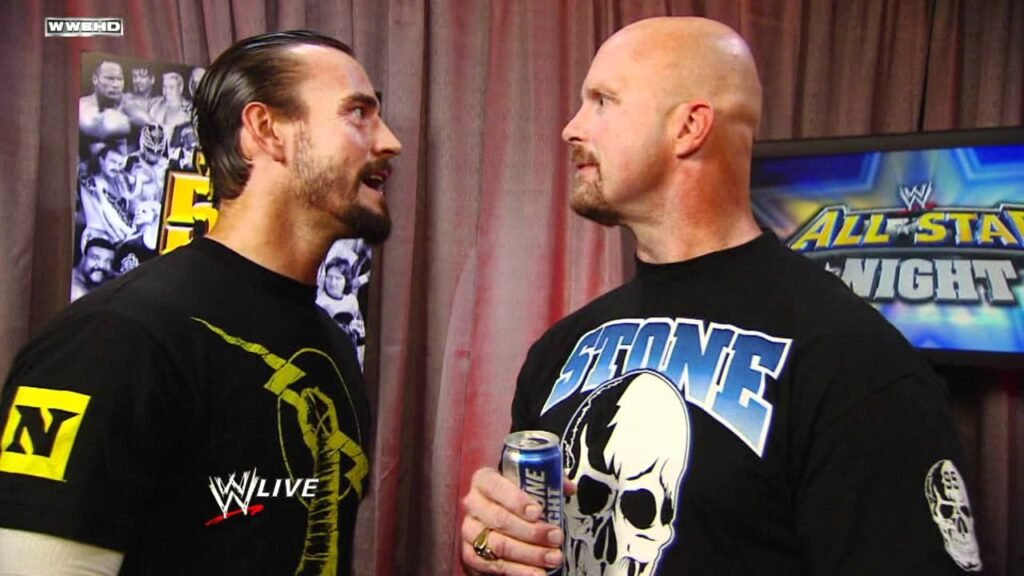 CM Punk vs Stone Cold Steve Austin is many fans dream match. The men were the polar opposite personalities, yet shared common ground that made them both two of the most popular stars in their respective eras.

A match between the two would have been an iconic match in WWE and would have given CM Punk the Wrestlemania main event he craved during his time in Vince McMahon‘s promotion.

But why did CM Punk never face Steve Austin at Wrestlemania? And what would a feud between the two have been like inside a WWE ring?

With John Cena vs The Rock the headline for both Wrestlemania 28 & 29, CM Punk was lost in the shuffle a bit. While he did face Chris Jericho and The Undertaker at the respective events, he longed for the Wrestlemania main event spot that never came.

Cena vs Rock was the biggest match WWE cut have put on during those years, except for one more. CM Punk vs Stone Cold Steve Austin was a match that could have rivalled the real main event match and produced one of the great moments in Wrestlemania history.

Stone Cold Steve Austin had been retired for nearly 10 years at that point, and showed no signs of coming back. While he did return to wrestle Kevin Owens at Wrestlemania 38, it was assumed that his swansong at Wrestlemania 19 was his last match for good.

However, a teased match against CM Punk at Wrestlemania 29 drew the interest of fans, who saw CM Punk as the Stone Cold Steve Austin of the modern era.

The pair faced off in a backstage segment during the “guest host” era of Raw, with Austin offering Punk, famously straight-edge, a beer as the tension was palpable between the two.

If that did not convince the fans enough, Steve Austin and CM Punk sat down with Jim Ross to promote the WWE 13 video game. The game focused on stars of the Attitude Era, like Austin, but front and centre of the video games cover art was CM Punk, who had just come off a 434 WWE Championship run.

In the interview, the pair started out talking about the game but soon the atmosphere turned sour. The two appeared to cut a promo on each other, teasing a feud and a blockbuster match at Wrestlemania that had fans begging for a bout between the Best in the World and the Texas Rattlesnake.

The interview saw tensions boil over, and although a match between the two never materialised, it gave fans a taste of what a CM Punk vs Stone Cold Steve Austin feud could look like.

In recent years, both men have talked about a match that ultimately never happened, but both CM Punk and the entire wrestling world would have loved to have seen. Despite later coming out of retirement, Austin was intend at the time to stay out of the ring and not ruin his legacy in WWE.

In a recent Tweet, CM Punk responded to a fan who asked about how a match between CM Punk and Steve Austin would go. CM Punk replied, tongue-in-cheek, “would’ve been short. GTS. 1 2 3.”

“I see. @CMPunk You did say that. Damn. Complete delusion. I had us at a 60 minute time limit match at the Rosemont Horizon. Right there in Chicago. Chi Town. The Windy City. Helluva match. Caught you with a Stunner at 59:56. You did not kick out. Bottom line.”

While it’s sad we never saw CM Punk vs Stone Cold Steve Austin, we did get a snapshot of a feud between the two which shows just how good both men could have been against each other.

Who do you think would have won CM Punk vs Stone Cold Steve Austin? Let us know what you think or click below to keep reading