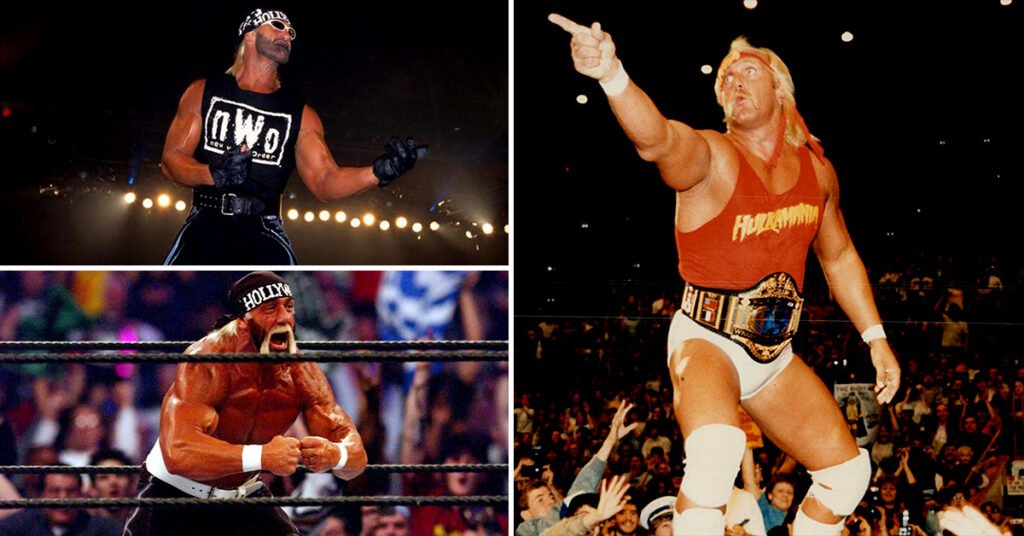 One of the most famous wrestlers of all time is “The Immortal” Hulk Hogan. The Hulkster has inspired million of Hulkamaniacs to say their prayers and eat their vitamins as he took the wrestling world by storm from the 1990s all the way into the 2000s. While even the best Hulk Hogan matches aren’t the most technically impressive bouts, Hogan can command the crowd like few wrestlers had before him.

He first became a star in the AWA, before moving to the WWF where his star would really shine. Hulkamania was born thanks to film rolls in movies like Rocky III and his incredible connection to the crowd, and continued to grow as Hogan main evented the first ever Wrestlemania.

Did Hulk Hogan vs John Cena almost happen at Wrestlemania?

He famously slammed Andre the Giant at Wrestlemania in one of the greatest moments in WWE history. Whilst that match wasn’t one of Hulk Hogan’s best, it produced an iconic moment that has lived long in many WWE video packages over the years.

Here is the list of the top 10 best Hulk Hogan matches, rated by Cagematch.com, from a wide variety of wrestling companies from the WWF, WWE, WCW and NJPW.

Randy Savage walked into Wrestlemania V as the WWF Champion. He was one of the best workers in the world at that point, working a fast, exciting style that very few wrestlers could keep up with.

However, Hogan managed to pull his weight in this match, and pull off one of the great Wrestlemania main event matches. Hogan looked to be beaten after being hit with the Macho Man elbow, but soon Hulked Up and dropped the leg on Savage to win his second WWF Championship.

Few would think that a 49 year old Hulk Hogan and 57 year old Vince McMahon would pull out a great match at Wrestlemania. However, luckily the match had a street fight stipulation that helped hide Hogan’s age and Vince’s lack of any actual wrestling ability.

The match pitted the star of the first Wrestlemania vs the creator of Wrestlemania in a blockbuster match that fans had waited years to see. Hogan was back in the red and yellow after facing the Rock in NWO colours the year prior, and garnered a huge reaction from 54000 fans in Seattle.

The match was one of the great Wrestlemania street fights, and surprisingly lasted over 20 minutes. Both men pulled out all the stops, including a leg drop off a ladder through a table by McMahon, and even interference from Hogan’s long time enemy, Rowdy Roddy Piper.

This match was ahead of it’s time and proved Hogan’s credentials in the ring. Their match built slowly before progression into some great sequences. The pair also hit each other with their finishers a number of time, for a number of near falls. It was more similar to a modern day match than one in the early 1980s.

The match was a rare meeting between two legends of their respective countries. Hogan would come out of the match as the winner after a double Axe Bomber, which was the finisher he used in Japan more than the Leg Drop.

Two of the worlds biggest stars collided in NJPW in 1983, as Hulk Hogan wrestled Antonio Inoki. Inoki is one of the greatest Japanese wrestlers of all time, whilst Hulk Hogan personified wrestling in America during the 1980s and 1990s.

The pair wrestled in 1983 in the final of the IWGP Championship League. It was a tournament to decide the first IWGP Heavyweight champion, and the final ended up being between these two legends.

It was a long, drawn out match. The match was a slow, technical affair that built to the finish by using intricate holds and stiff strikers to wear each other down. Hogan would turn out to be the victor and the first IWGP Heavyweight Champion after a clothesline to back on Inoki’s head on the outside. He knocked out the Japanese legend, winning the match by KO.

6. vs The Ultimate Warrior – Wrestlemania VI

Despite taking place in the first half of 1990, no match has ever been more “80s” than Hulk Hogan vs The Ultimate Warrior.

And that is what makes it one of the best Hulk Hogan matches. Two coked up, jacked to the gills and larger than life characters running full steam ahead at each other and shouting nonsensical promos at each other.

It is literally what wrestling is all about. This is where wrestling peaked, and it’s been downhill since there.

Ultimate Warrior won the match, but wrestling won the day. This match IS wrestling, and no wrestling will ever be as wrestling as this wrestling was.

The Road Warriors are one of the greatest tag teams of all time. A “Road Warrior Pop” was considered the biggest pop of the show, and their iconic look remains famous to this. Spiked shoulder pads and face paint is a look that will never go out of fashion.

At SWS Wrestlefest in 1991, they faced off against the iconic Hulk Hogan and his partner, Genichiro Tenryu. Tenryu was an innovative and brilliant wrestler who made his name mainly wrestling for Giant Baba’s All Japan Pro Wrestling. The pair previously wrestled on a match on this list, but here teamed up for one of the All star clashes of the 1990s.

The match was quality from start to finish, and was as stiff as they come. Hawk and Animal threw their opponents around like rag dolls and lit them up like Christmas trees with brutal chops from all angles. Tenryu may not have had his best showing in this match, but it was a prime Road Warriors vs Hulk Hogan encounter.

Number four on this is one of the most significant matches in wrestling history. It began the story of the NWO and was the start of the biggest boom periods in the history of wrestling.

Scott Hall and Kevin Nash jumped from WWF to WCW in 1996, with fans thinking they were agents of Vince McMahon sent to take down WCW. They challenged the trio of Lex Luger, Randy Savage and Sting to a six-man tag team match at Bash of the Beach 1996, warning them that a surprise partner would be joining them.

Rumours swirled about who the surprise partner would be, but no-one expected what would happen when Hulk Hogan would run out during the match. The Outsiders were beating down Randy Savage, and Hogan ran out seemingly to make the save.

However, when he turned and dropped the leg on Savage, the crowd exploded with boos and the New World Order was born.

The War games match that pitted Team WCW vs the NWO is the third best Hulk Hogan match of all time. It was the first attempt for the NWO to take over WCW. While the NWO featured the three core members of Scott Hall, Kevin Nash and Hulk Hogan, they were joined by Fake Sting.

Played by “Jumpin” Jeff Farmer, he fooled fans into thinking Sting had defected from WCW, but the real Sting turned up to Fall Brawl 1996 to prove that wrong.

Sting’s friends and fans doubting his loyalty was the key story of the match. He was the last man to enter the match, as War Games match have staggered entrances into the match, and proceeded to absolutely clear house. He took down the NWO one by one and looked like he would be the man to stop them before they ever really got started.

However, once he’d taken them all out, he turned to his former friend Lex Luger, angrily shouting “Is that good enough for ya?”. He then walked out on his team, turning it into a 4-3 match in favour of the NWO, who promptly defeated team WCW.

Whilst Hogan may not have been the star of the match, the NWO was built around him and that made him a crucial part of the match.

Two of the biggest stars in their respective countries combine in a classic match here. WWF’s Hulk Hogan at the peak of Hulkamania faced off against All Japan legend Stan Hansen in a dream match for all wrestling fans.

The match was an intense, fast paced brawl from start to finish. Hansen brought the intensity immediately and Hogan had no choice but to match him. They brawled all around the outside of the ring, with Hansen even busting the Hulkster open.

Blood tricked down the face of Hogan as the match came to a close. The crowd were fully invested, seeing two of the biggest American stars giving it their all. Hogan won the match with a clothesline after over 10 minutes of brutality, and it remains one of the best Hulk Hogan matches of all time.

If you watch this match with the sound off, it’s awful. It would be nowhere near this list and you’d come away thinking The Rock and Hulk Hogan were terrible wrestlers.

Turn the sound on and listen to the crowd and its one of the all time great Wrestlemania matches. You could consider this a triple threat match, as the crowd are as important to the match as the two wrestlers in the ring were.

Despite being 48 years of age, Hogan turned back the hands of time and fought like he did in the mid 1980s. It was a classic match that both Hogan and The Rock will have on their best ever match list and one that is always worth a rewatch just to hear the crowd go crazy for the Hulkster.

Could Hulk Hogan return to WWE for one last match?