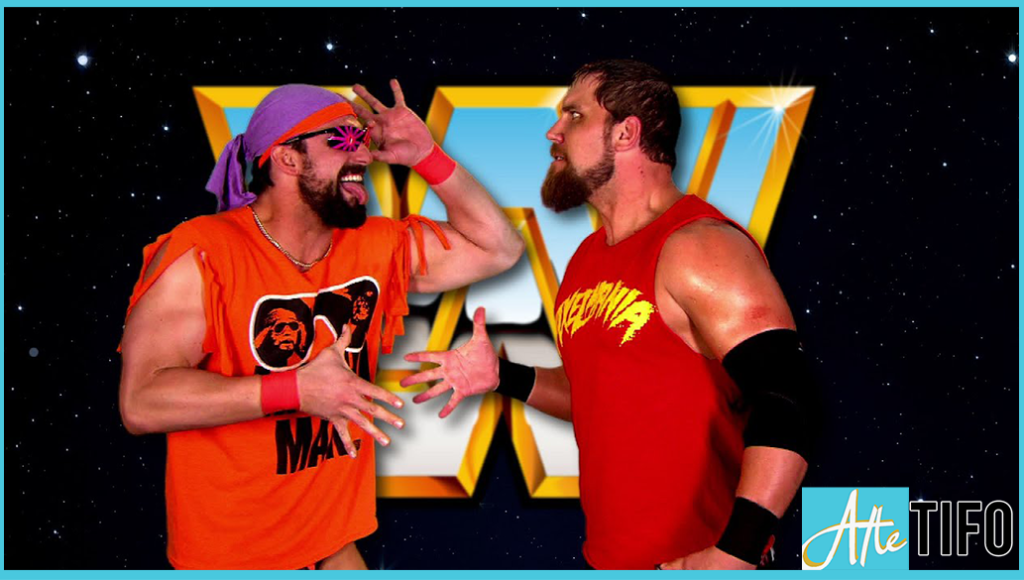 Macho Mandow and Axelmania were a tag team who briefly teamed in WWE in 2015. Dressed up and acting like Hulk Hogan and Macho Mandow, the pair attempted to mock the Hall of Famers while also wrestling together in a team, like the Mega Powers did years previously. Was it a Gimmick to far?

2014 was a very different year for both men. Damien Sandow became a full-time jobber, dressing up to be mocked and then knocked out every week, to being a stunt-double for Hollywood Miz, to being simply himself. It was an up and down year for the former Intellectual Saviour of the Masses, who seemed lost in the shuffle until the Miz team came along.

Here, we’ll look at both men individually, to see how they got to where they did

Rybaxel was a tag team consiting of “The Big Guy” Ryback and “Better than Perfect” Curtis Axel. Despite immense popularity and even matches for the WWE Championship, neither men fulfilled their potential in WWE. Curtis Axel is currently a free agent, whilst rumours of a Ryback AEW Debut still linger on. Only time will tell whether either men steps foot in AEW, TNA or back to WWE any time soon.

Rybaxel feuded on and off with Cody Rhodes & Goldust over the Tag Team Championships until Money in the Bank, failing to win the title. The duo then stopped tagging due to an injury to Ryback in August, and they later broke up amicably in the best tag team break up of all time.  He spent the rest of 2014 main wrestling on Main Event, and lost most of the matches that he had on Raw and Smackdown.

At the Royal Rumble that year, Axel was making his way to the ring. He posed on the ramp, then was attacked from behind by Erick Rowan. This spawned hist most popular gimmick ever – Axelmania.

Axel started to claim he was still in the Royal Rumble. Because his feet never touched the floor (he never entered the ring, thus the match) and that he was the longest ever Rumble participant, and had a clock on the screen showing how many days he’d been in the rumble.

This gimmick was very entertaining, and slowly morphed into him doing an impression of Hulk Hogan, proclaiming Axelmania was running wild. He even appeared in segments with Hulk Hogan and Snoop Dogg.

Damien Sandow is the one who had the most interesting year. After Wrestlemania, where he took part in the inaguaral Andre the Giant Memorial Battle Royale, he took on a different persona each week. It started when he dressed as Magneto when Hugh Jackman was on Raw, and carried on dressing up as people like Sherlock Holmes, Lebron James, Lance Stephenson (me neither), Paul Revere and even Vince McMahon himself. That last match ended with him being squashed by the Great Khali, with each match carrying a similar ending.

Eventually Sandow got put together with The Miz. The Miz had just finished filming the latest edition of “The Marine” franchise, and was playing the role as a arrogant Hollywood star. He hired Sandow originally to take his place in matches, to avoid him taking bumps to keep him looking good for his movies. (John Cena starred in the first “The Marine” movie, but was John Cena in the military?)

However, things quickly took a turn. Sandow, now named “Damien Mizdow”, mimicked everything the Miz did, even doing moves to an invisible man on the outside of the ring, as the Miz wrestled in the ring. The Miz ended up doing most of the wrestling, as Mizdow’s popularity went through the roof. His copycat gimmick got him more over than ever, and fans were clamouring for more.

Fans even resorted to booing Miz and cheering Mizdow, with chants of “We want Mizdow” a common theme in his matches at this time. This began to sew seeds of doubt in the Miz’s head. He was jealous of Mizdow. He craved the crowd reactions he had. It was a great part of the long-term story they had going.

Miz and Mizdow began teaming together, and even won the WWE Tag team Championships at Survivor Series, from Goldust & Stardust (Cody Rhodes alter ego) in a 4-Way tag team match. They lost the titles on to the Uso’s on the last Raw of the year, with that being the start of the Miz showing real anger and disdain for his stunt double. The pair challenged for the titles again at the Royal Rumble, but were unsuccessful.

The rivalry came to a head at Wrestlemania 31. Both men took part in the Andre the Giant Battle Royale, were Mizdow was by far the most popular man in the match. Mizdow finally took revenge on the Miz for bossing him around all year, tossing him out of the ring and eliminating him from the match. The crowd exploded, willing Mizdow to finish the job and win. However, in WWE fashion, they had him come second and lose to the Big Show. Yay.

The two then feuded in a very lacklustre fashion. They fought a number of times on Raw, reduce their feud to pointlessness. They battled again, for the rights to the ‘Miz’ name, which Miz one. Sandow had been made to look stupid, losing constantly and back to where he started before he was with the Miz.

Here’s where our two stories intersect.

Sandow started his post-Miz life stood in a ring, alone with a microphone. Just himself. No funny costumes, or silly voices. He runs down his past year, dressing up as funny characters and pretending to be people he is not.

Then comes the silly voices.

He is interrupted by Axel, who says he hates people pretending to be some one they’re not. Then he asks Sandow “What’cha gonna do!” which was actually quite funny. Axel has great comedic timing despite his deficiencies in the ring.

Then Sandow ruined his run before it even began.

He mimicked Axel, saying “What’cha gonna do!” in a mocking voice. It was silly, it was stupid, the crowd laughed for some reason. After a year of watching him pretend to be someone he’s not, this was not what he needed to do. Any interest in Damien Sandow the man went out the window. It was really sad to watch.

This segment lasted for a few minutes, with Sandow very childishly mocking Axel. He even went to far as to pretend to copy Axel sitting on the ropes, after he told him to get out of ‘The Ax Man’s” ring.

This mocking turned into a fight which Sandow got the upper hand, hit a big boot and his signature “Elbow of Distain”. He defeated Axel on Smackdown that week, parroting the ring announcer mockingly. You’d have hoped this was it for the impersonations and he’d go on to develop a new character, but you could not be more wrong.

The End is Nigh

On May 11, 2015, “Macho Mandow” made his WWE debut, facing Curtis Axel. He spent the match parodying “Macho Man” Randy Savage, whilst Axel was still on his way to becoming Hulk Hogan. The match ended in a DQ, when the Ascension, a short-lived Road Warriors-inspired tag team, interrupted and attacked the duo. Macho Mandow fought off the team, and set Axel up for a Atomic Leg Drop. Mandow went for the top rope elbow drop, but the Ascension got away.

After the match, the pair parodied one of the most famous segments, the formation of the Mega Powers. On Saturday Night’s Main Event in 1987, Hulk Hogan and Randy Savage did an overly exaggerated handshake to show that they were a team. This was an iconic segment in WWF history.

Macho Mandow and Curtis Axel did this exact thing in the ring. It was funny at first. Then every promo backstage for weeks, they would do the exact same exaggerated handshake. It got a little exhausting.

This led to a match on the 2015 Payback pre show. The grandest stage of them all, some may say.

Macho Mandow and Axelmania, under the name ‘The Meta Powers’ took on the Ascension in a tag team match.

Both men came out dressed fully as Macho Man and Hulk Hogan. Axel even bleached his moustache and wore a bad wig, just like Hogan. They hit all the signature spots of the men they were mimicking. All the spots except for when Mandow went to the top rope to hit the Macho Man elbow drop. The Ascension pushed him off and hit their finish for the win.

Now Sandow, who had a huge year with a huge Wrestlemania Moment, was losing on the pre show, mimicking some one else and going nowhere. Axel was going nowhere again too. And they both looked silly.

Time is a flat circle.

Sandow and Axel stopped the gimmick after the Hulk Hogan sex tape and racist rant came out. Sandow would flounder on the main roster until being released in 2016. Axel would go on to win the tag team titles with Bo Dallas as ‘the B team” and act as entourage for the Miz. He was also released in 2020.

Sandow has gone on the wrestle in NWA and pursued acting, while the pandemic has halted Axel’s career since release. Whatever happens to them, we’ll always have the “What if” of Sandow’s career, how they wasted a year of build up on a silly gimmick then threw him to the curb afterward.

And the dream of a Macho Mandow and Axelmania tag team championship reign.