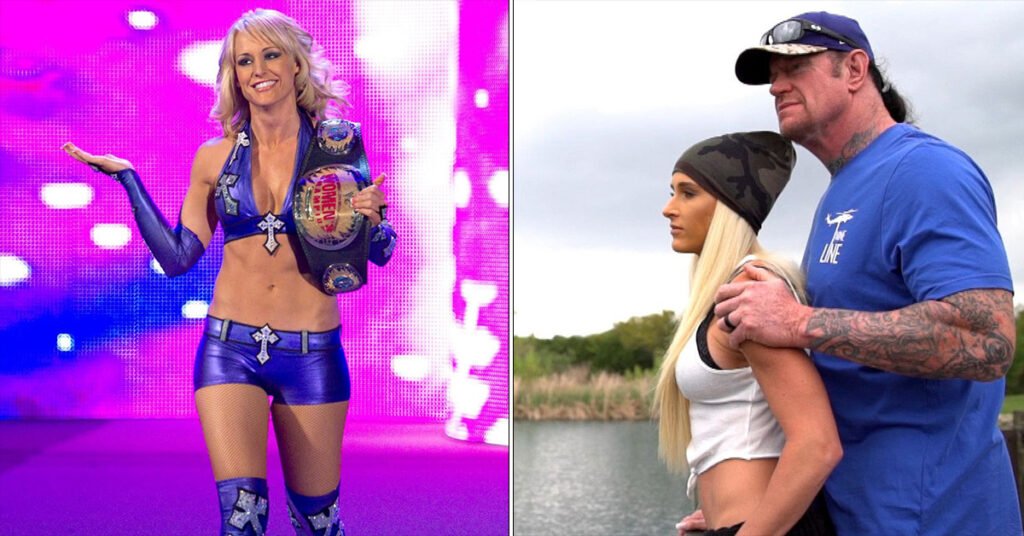 Michelle McCool is one of the biggest stars in the history of the WWE Women’s Division. She is a future hall of famer and a former Divas Champion who was a star of the company during the mid 2000s.

She is most famous for her tag team with Layla as the formidable “LayCool” and has made numerous appearances since her retirement in 2019, including surprise returns in the Royal Rumble.

What happened to Michelle McCool?

Michelle McCool was first discovered by WWE as part of the 2004 Diva’s Search Contest. Despite losing the competition to eventual winner Christy Hemme, she was signed to a three year deal with WWE and began appearing on WWE TV almost immediately.

McCool’s first character in WWE was that of a fitness trainer. She would appear backstage, teaching various wrestlers different stretches and holds to help keep them fit an limber. This character did not last long, but did have some memorable moments in Smackdown, like teaming with the Big Show in a victory against Dawn Marie and Renee Dupree.

McCool would be sent down to OVW for training and return to the main roster with a gimmick more befitting her real life. She channelled her real life job as a teacher as her new persona, as a teacher/manager.

She would manage the team of KC James and Idol Stevens (Later known as Damian Sandow) for a number of months. The pair most notably challenged Brian Kendrick and Paul London for the WWE Tag Team Championships, but failed to end the duo’s record breaking run.

McCool would continue to work on her character and in-ring ability until she finally won a Championship in WWE. McCool defeated Natalya at The Great American Bash to become the first ever WWE Divas Champion. She was a face during his fight for the Championship, after being repackaged as the “All-American Diva”.

She held the Championship for a few months, before she was defeated by Maryse on Boxing Day to lose her Divas Championship. Whilst this was devastating for the former teacher, it helped reinvigorate her character.

After the match she attacked Maria, who had been by her side for some weeks, to officially turn heel and start on of the greatest runs in WWE Divas history.

If Michelle McCool was not already a name etched into history, her tag team with Layla was one that will surely earn both women a spot in the Hall of Fame one day.

In protection of her Women’s Championship, Michelle McCool joined forced with fellow WWE Diva Layla. The English wrestler had not had much success on WWE so far but grew to new heights with their take on the Two-Man Power Trip which they called LayCool.

Michelle McCool would lose, then regain her Championship in early 2010, making her a two-time Women’s Champion. Layla helped her retain her championship and the pair formed a fast friendship.

McCool would lose the Championship again at Extreme Rules to a dominant Beth Phoenix. The WWE Hall of Famer proved to be a thorn in the side of LayCool, but even she could not stop the duo winning more gold.

The pair fought Phoenix in a handicap match on Smackdown, with whoever secured the pin fall would win the title. This led to Layla winning her first WWE Women’s Championship as she pinned Phoenix to walk away with the Championship on Smackdown.

However, the title was as much a Laycool title as it was a Layla title. In one of the WWE’s most iconic images, the belt was cut in half and worn by each of the two members of LayCool. It was the most dominant run by a duo in the Women’s Division until the Bella Twins matched them years later.

The pair would lose the Championship and split up eventually. Jealously and infighting led to a match at Extreme Rules 2011. This match was no disqualification, and the loser would be forced to leave WWE for good.

To the shock of everyone, Michelle McCool lost to her former friend and was banished from the wrestling promotion for good. While shocking at the time, McCool later revealed that injuries and starting a family were her reasons for walking away from LayCool and the WWE.

“It was tough just leaving in itself was tough because it got to a point where I was dealing with so much again mostly being Undertaker’s girlfriend and why I was on TV and even having a writer throw the papers up one day and say ‘Why don’t we just call it the Michelle McCool and Undertaker show?!'”

“It was nonstop and I went to Vince on numerous occasions and bless his heart he was wonderful, but I just said Vince, I don’t wanna hate something that I grew up loving so much and the longer I stay the more I’m like like getting a sour taste in my mouth.”

“So making that decision to leave was as hard as it is, but more than wanting to be in WWE or be a champion I’ve always wanted to be a mom.”

Michelle McCool would not stay gone forever. She returned as a surprise entrant in the first ever Women’s Royal Rumble, giving a dominant showing. In the 2018 Royal Rumble, she eliminated the most wrestlers (5) and lasted almost to the end as Asuka won the first ever women-only rumble match.

She would return again for the 2022 Royal Rumble, but this time not doing as well. She did briefly reignite her rivalry with Mickie James, but that was short lived as James eliminated her from the match.

Is Michelle McCool married to The Undertaker?

Another connection of Michelle McCool to the WWE is that she is married to a legend of the ring. The former WWE Women’s and Divas Champion is married to none other than the Phenom himself, The Undertaker.

It is unknown when the pair began dating, but they married in 2010 at a private ceremony in Texas. The pair have been happily married since and had their first child together one year after her WWE departure, in 2012.

McCool appeared many times on the documentary “Undertaker: The Last Ride“. She spoke at length about her husbands career and his attempts to finally put an end to it by having one last match that he could be proud of.

She is currently rumoured to be included as a legend in WWE 2K22.

What happened to Kelly Kelly? Check out our article on what the former WWE Diva is up to now!