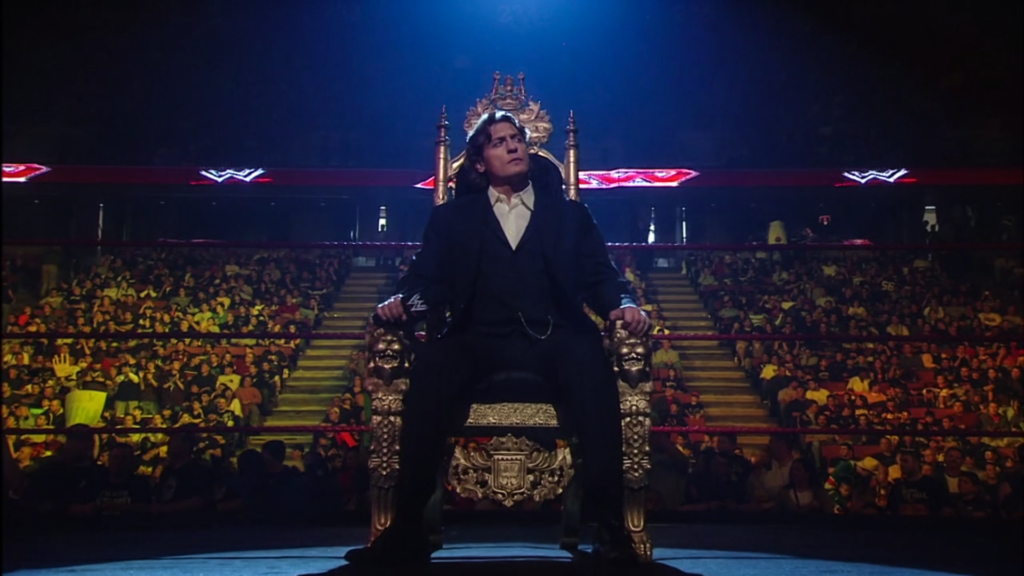 William Regal sits on his throne as King of the Ring

Who is William Regal

William Regal is an English wrestler famous for his rough looking technical wrestling and great character. Playing one of the great villains in wrestling, the grapple was a staple on TV from 1993 until his retirement in 2013. Considered one of the greatest performers of all time, his in ring ability and microphone skills are unrivaled.

William Regal never had the opportunity to become the World Heavyweight Champion, but his best chance came in 2008. In the years prior to that, he had a number of title reigns, being a multi time WCW Television Champion, WWE European, Intercontinental & Hardcore Champion, as well as a multi time Tag Team Champion. He was a mainstay on WWE television for years, having great moments as the WWF Commissioner, in a tag team with Tajiri and even a feud with Triple H. He spoke at length about his career here.

However, nothing in his illustrious career came close to when he became King of the Ring. William Regal King of the Ring was the closest he came finally winning what he craved – the WWE Championship.

Johnathan Coachman was made General Manager, in the middle of 2008, due to nobody running the show. Vince McMahon, the Chairman of WWE, wanted to elect a new permanent General Manager. So, on August 6th, a battle royale took place, with the winner being the new man in charge of Monday Night Raw. ECW Legend The Sandman appeared to have, but Regal, who was hiding outside the ring, ran in at the last moment and eliminated him for the victory.

Regal had the experience for the role. He was previously the WWF commissioner in 2001 in one of his most popular roles, with his personal assistant, Tajiri. This run showed not only his serious side, but also allowed him to work on his comedy performance.

Regal has been quoted as saying the comedy stuff he did in the ring was his favourite, owing to the fact that his dream professions were all to do with making people laugh.

It was three things: I either wanted to be a wrestler, a clown, or a comedian. And that was it. And I’ve always thought I got to do all three doing this

William Regal, on his dream profession

The Rise of King Regal

Regal’s reign as General Manager started out fun, but soon turned very dark and sinister. The Englishman turned nasty and viscous, brutally attacking his foes with brass knuckles. He became drunk with power, scheduling matches at a whim and ever shutting raw off early, during a Triple H vs Randy Orton match. Uttering the immortal line “Take it off the bloody air!”, and by uttering I mean screaming at the people in the production truck.

The General Manager plays the Game

The biggest feud Regal had during this time period was with Triple H. The pair had previously battled when Regal was commissioner, and saved Euguene from attack by HHH’s faction, Evolution. It led to one of Regal’s best ever promo’s, which can be seen here.

The feud began when Triple H faced Ric Flair on Raw. Flair was put under the stipulation that the next match he loses, he had to retire. To up the stakes for his Evolution team mate, Triple H was told that if he did not win, then he would not be able to enter the 2008 Royal Rumble. William Regal cost HHH the match when he punched Flair, brass knuckles in hand, causing him to win the match via DQ and banning him from the Royal Rumble.

The mini feud came to an end on an edition of Monday Night Raw, when The Game faced off with Regal in a special edition of Raw called ‘Raw Roulette’. They faced off in a ‘First Blood’ Match. The match wasn’t a long one, but told a great story. Triple H won but both men came out looking good, and The Game was eventually was allowed back in the Royal Rumble. He finished 2nd, last being eliminated by the returning former WWE Champion John Cena.

Regal didn’t have a marquee match on Wrestlemania 24, sadly. Triple H challenged Randy Orton for his WWE Championship, whilst Regal didn’t even wrestle.. He introduced his representative of Raw, Umaga (or Umanga, as he called him) to face Batista in an Inter-Brand match. To rub salt in the wounds, Raw lost the bout with Batista pinning Umaga.

William Regal King of the Ring

Regal’s crowning achievement came on Monday Night Raw. Regal announced a King of the Ring tournament to take place on Raw, and that he would be a competitor. He beat Hornswoggle, a lepreachaun, and his father Finlay (who was attacked prior to the match) on his way to the final, where he defeated CM Punk in a short match.

After the match, he slumped atop the throne set up on the stage, basking in the glory of his victory. It was a memorable image that is burned into my memory, and the memory of thousands of others.

Sadly, that is really where the fairy-tale ends. There were, reportedly huge plans for Regal post King of the Ring. He was supposed to morph into an evil ruler character, domineering over the WWE with an iron fist. Rumours even of a world title reign were brought up, which would make sense in a title feud against long time foe, Triple H. William Regal as King of the Ring had real potential, as the snarling Brit had very few who matched him when it came to playing the villain.

The King is Dead.

The next week on Raw, Regal’s coronation took place. Declaring himself “most powerful entity in the entire WWE”, then interrupted by MISTERRR

He interupts the new King, shouting that he is MISTTTTTTEEEERRRRRR. KENEDY! KENEDY a few times, after the Raw General Manager tells him he needs to apologies for speaking out of turn. The pair brawl, and this leads to a match 2 weeks later, with an interesting stipulation.

William Regal, King of the Ring and Raw general manager, loses this match. He is stripped of his position as the head of Raw, and is absent from WWE television for a number of weeks.

While this feels incredibly abrupt, there is good reason for it. Regal failed a drug test for the second time, and was handed a 60 day suspension, prior to the match. This brought an abrupt end to a run which was only really finding it’s feet.

William Regal as King of the Ring had barely had time to get his feet under the table as a main event act. He’d had huge matches with Randy Orton and Triple H the past year, but he was truly ready to be the biggest heel in the company.

Few know what really happened to Regal. He has taken responsibility for himself, but it’s disappointing thinking what could have been.

Regal had some great matches in the future, feuding with Christian over the ECW Championship. He had a stable, the Ruthless Roundtable. It featured himself, Vladmir Kozlov and Ezekial Jackson, and they helped him try to capture title gold. Sadly, Regal never found Championship gold ever again.

His retirment match took place in NXT, taking on the Swiss Superman, Cesaro. The match is an incredible, story-driven technical masterclass, show the fans exactly what they missed after Regal’s suspension in 2008.

What could have been if Regal had stayed clean? Who knows? World Championships? Wrestlemania Main Events? We’ll never know, and that is a sad fact.

Wrestling and boxing have been intertwined for years. Boxers like Muhammad Ali and Mike Tyson have made multiple appearances in WWE, usually in guest spots […]

END_OF_DOCUMENT_TOKEN_TO_BE_REPLACED

Ohio has had its fair reveal of prominent name performers when it comes to professional Wrestling. Previous All-American in shot put Bill Miller, became the […]

END_OF_DOCUMENT_TOKEN_TO_BE_REPLACED

Tonight, AEW Dynamite celebrates their second anniversary. Over the last two years, they have had 104 shows, 3 World Champions, 12 pay per view events […]

END_OF_DOCUMENT_TOKEN_TO_BE_REPLACED

Bret Hart, Sting and more legends should be featured in the new AEW Video Game! Tony Khan, CEO of AEW, has reportedly invested over $10 […]