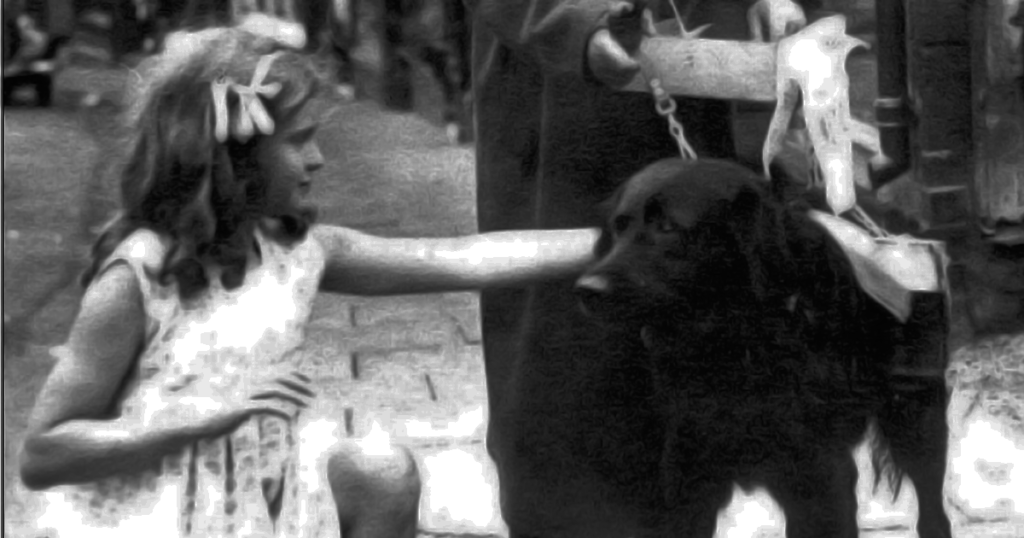 Swansea Jack being petted by a small girl

“The Jack’s” or “the Jack army” are names used by the Swansea City fans to describe themselves and their club. However, Cardiff City fans would add different words to come after the word “Jack”, although we won’t mention those. Swansea Jack, however, is a name synonymous with the club and city of Swansea.

Swansea Jack – Who was he?

His first owner was a man by the name of Taulford Davies. It was in the possession of Mr Davies that Jack got himself into a spot of trouble. In Parc Llewelyn, a lovely green area in the Morriston area of Swansea, Jack was alleged to have “Decimated” a local population of ducks, a far cry from his future reputation.

Swansea Jack was rehomed into the loving hands of William Thomas, a dock worker, and the pair moved to the North Dock in Swansea. Jack became a best friend to William, whom he stayed with for the rest of his life.

Swansea Jack was famous was his many life-saving rescues of drowning passers-by. If anyone was struggling whilst swimming, Swansea Jack would also respond to their cries and go in to save them.

Jack was a black retriever dog, so was big enough to help drowning human’s stay above water, and help drag them to safety. His first rescue occured when he was just nine months old, in June 1931. Still young himself, he heard the cries of a drowning 12 year old boy in the North Dock in Swansea.

The boy was reportedly dumping rubbish into the docks, when he fell into the docks and struggled to swim. Swansea Jack immediately jumped in, and helped the boy out of the water and to safety.

What makes this tale so heroic is that Swansea Jack was actually afraid of water just months prior to this event. His owner William encouraged him to venture into the water with local boys, and this may have been what made him so enthusiastic about jumping in and saving locals struggling to swim.

A lot of people in Swansea at that time couldn’t swim, so there was a need for someone helping the local’s who fell into the water at that time.

The majority of people couldn’t swim. There’s a possibility that there were a number of people in need of saving. It’s known there were bodies that used to be pulled from the river and docks of people that were drowned

Swansea Jack is rumoured to have saved 27 people in total from the docks in Swansea. However, when he died, which was reported across the country, the Nottingham Journal claimed that he had saved 29 lives. His memorial claims 27 human lives were saved by him from drowning, in addition to to canine lives.

The dog was awarded numerous awards throughout his life, and posthumously. After saving a 12 year old boy, and then a struggling swimmer in front of a large crowd of people.

His picture ended up in the local newspaper and he became somewhat of a local celebrity. The local council even awarded him his own award, a solid silver collar commemorating his brave efforts in saving 27 people from drowning

He even made news further afoot than Swansea. The Star newspaper in London awarded him “Bravest Dog of the Year” in 1936, and the Lord Mayor of London awarded him a Silver Cup. He is still the only dog to have been awarded TWO bronze medals (‘the canine V.C.’) by the National Canine Defence League

Swansea Jack sadly passed away in October 2nd 1937, after eating rat poison, aged 7. his burial monument was paid for by the people of Swansea. It is located on the promenade by the beach in Swansea. You can see it walking to and from the Swansea University Singleton Campus.

There are many disputes about how Swansea City came to be named “The Jacks”. One theory by SwanTrust is that it was to do with the apparel worn by the local sailors.

Their nickname “Swansea Jacks” was born from their apparel which was jack tarred in order to provide some protection from the harsh elements of the sea.

This is the oldest known account of why they are referred to as the Jack’s, and dates back to the 19th century, over 100 years before Swansea Jack rose to prominence.

The sailor story is almost certainly true. I choose to believe in the magic of one little dog trying his best and making a difference. Swansea Jack has a small Welsh city, and made it a better place.

I choose to believe it was Swansea Jack who is the namesake of ‘The Jacks’.

1 thought on “Who Was Swansea Jack? The Heroic Dog from Swansea”