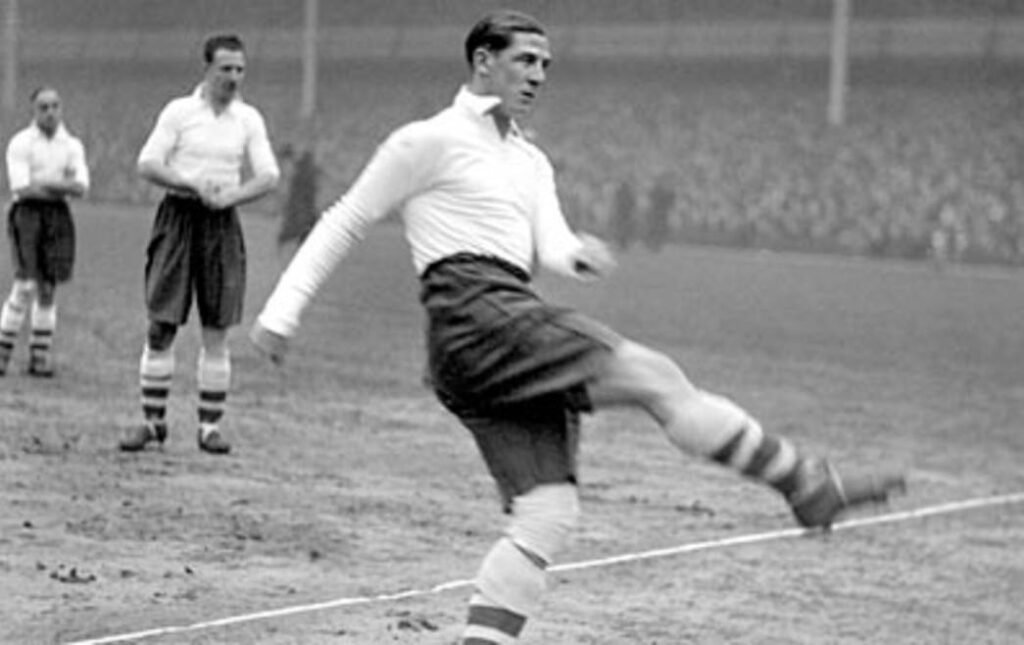 When you list the best Arsenal Goal scorers of all time, a similar list of names will be read out. Thierry Henry, Dennis Bergkamp, Ian Wright. Premier League greats who would get in any team in history. With an eye for goal and magic boots for scoring. But one name that many will not know, even some Arsenal fans, is a war time football legend called Ted Drake.

Not much is known about Drake’s life before football. We know that he was born on 16 August 1912 in Southampton, and that is where he grew up.

We know that he was a lifelong Southampton fan, and that he dreamed of playing football for the Saints and England. He would kick his football around the back streets of his Southampton home, pretending to be his footballing hero Bill Rawlings.

Rawlings scored 175 times for Southampton, and even managed two caps for England. He was a strong, quick centre forward who made his name in Southampton despite being born in Andover. It was Drake’s dream to be the first Southampton-born player to play for England.

Drake earned his trade originally as a gas-meter inspector, whilst playing football for Winchester City. He played The Citizens until he was 19 years old, His performances at Winchester impressed, and he was signed to the Southampton youth team by manager George Kay. He spent two season’s with Winchester, and although his goal record is unknown, he helped the side reach the fourth FA Cup qualifying round, which caught the eye of the bigger teams in the country.

Football was not the only sport that Drake excelled at. He played cricket for Southampton Gasworks team, and impressed his way onto the Hampsire county side. He was paid 10 shillings a week for Hampsire, but only managed 16 matches for the side.

Despite later becoming a legend at Arsenal, Ted Drake was one injury away for signing for their deadly rivals Tottenham Hotspur.

Before signing for Winchester, the Englishman was to attend a trial organised by Tottenham Hotspur. However, he suffered a minor injury before the trial, and was forced to miss out completely. This led to him playing for Winchester City instead, with Spurs eventually kicking themselves over what could have been if not for that injury.

Instead, the Southampton born lad signed for his local side, Southampton. He signed in November 1931, and soon became a fixture in the side, aged just 19.

Drake made his debut on the 14th November 1931 in the Second Division. He didn’t take long to leave him imprint on the side, firing home a hat trick on his debut against Swansea Town (Now called Swansea City). Ivan Ponting of the Independent described him as “Fast, immensely strong and immeasurably determined, he packed a ferocious shot in either ”peg”, was combative in the air and, while his approach was not overburdened with subtlety, he could control the ball with commendable dexterity.”

Drake impressed in the Second Division for Southampton. He reportedly struck 7 goals for the Saints in his maiden season, and was the shining light in a poor side. Southampton finished 12th in the league

His second season at Southampton was even more prosperous. He netted 20 times in his first full season , but still only managed to drag Southampton to a disappointing 14th place.

Drake caught the eye of mercurial Arsenal boss Herbert Chapman. Arsenal’s title winning manager wanted to sign the striker in the summer of 1933, but Drake turned down the move. Reportedly, Ted Drake did not want to leave the South Coast, and move “Up North” to North London.

Drake spent a further season with The Saints. He started the season at a blistering pace, scoring 8 goals in 5 matches in the 1933/1934 season. The Englishman continued on scoring, netting 22 times by March 1934. He was a hot commodity at this point, lighting up the Second Division with his fast and direct playing style. Despite the death of manager Herbert Chapman, new Arsenal boss George Allison also took an interest in Drake. Southampton rejected offers for the striker, but their financial situation became too much to bear. He signed for Arsenal in March 1934 for £6,500.

Herbert Chapman, the Arsenal boss who wanted to sign Drake the previous season, passed away on the 6 January 1934. Aged only 55, he suffered from a sudden bout of pneumonia.

George Allison, upon signing the dynamic striker, described Ted Drake as “the best centre- forward in the world“. High praise for a player who had never set foot outside of the Second Division. But this high profile transfer would bear fruit for Arsenal soon enough, and Allison’s statement would turn out to be truer than expected.

Arsenal were top of the First Division when Ted Drake joined their ranks. He played in all final 10 matches for Arsenal after he signed, scoring 7 times for his new side. Only once did they fail to find the net after he made his debut, in a 1-0 loss to Portsmouth. Being the rivals of Drake’s hometown side Southampton, it seemed only fitting.

His goals helped Arsenal finish as Champions of the Football League, their second of three consecutive league titles. Despite netting 7 times for the Gunners, he missed out on receiving a winners medal. Research suggests that in the years Drake played, a player needed to make 14 appearances for their club in order to receive a medal. Drake only made 10 for Arsenal, and as such missed out.

In Drake’s second season at Arsenal, he made sure he got his Championship medal. He went on a tear, scoring an incredible 42 goals in 41 games for Arsenal. This included 3 hat tricks, and 4 matches where he netted four times, and fired Arsenal to a third consecutive league championship. Built upon the vision of the late Herbert Chapman, the man Chapman tried to sign fulfilled his vision.

The next season was one that was less fruitful for Drake. He managed 24 goals in the First Division, but failed to score a goal between 1 February and 13 April, 1935. This can be attributed to some niggling injuries he suffered throughout his career. He suffered a back injury which plagued him his whole career, and eventually caused his retirement in 1945.

Arsenal fell to a disastrous sixth place in the league table. After a treble of league titles, this was unthinkable. However, the blow was softened by an FA Cup Final victory at the end of the season. Arsenal played Sheffield United in the final in April, with Ted Drake himself scoring the only goal in a 1-0 win for Arsenal.

The final itself was one of interest, as it was the first time the BBC had experimented with sports commentators for their live radio broadcast of the final. This was due to the Wembley Stadium bosses banning all media from the Stadium for the game. This was due to a dispute over the broadcast rights for the final.

Ted Drake himself was a doubt for the final. His niggling injuries were catching up with him, and he almost didn’t play in the final. But he played through the injury as he did so many times, and won the match for Arsenal. A horror show in the league turned to a successful season after all.

In a Division One match on 14 December 1935, Arsenal travelled the Villa Park to play Birmingham-based side Aston Villa. Both sides had develop a sort of competitive rivalry in the 1930s, although Arsenal had tasted much more success than Villa. Aston Villa had invested big money in their team, to the tune of £24,000, but languished at the bottom of the First Division. They would go on to finish 21st that season and suffer relegation to the Second Division.

In front of 60,000 fans at Villa Park, Drake had secured his hat trick against Villa by half time. By an hour in had made it a double, scoring six. He added a seventh in the final minute of the game, but it could have been eight. He had a goal ruled out, as the ball struck the underside of the bar, and bounced over the line (or under, depending on who you believe). The goal wasn’t counted, and the record stood at 7 (seven) goals in one game.

Oddly enough, the record was beaten days later. Bunny Bell of Tranmere Rovers netted 9 times in a 13-4 win over Tranmere Rovers on Boxing Day 1935. It’s still an all time record in one game, but Bell could have made it an even 10, had he not missed a penalty.

However, Drake’s seven is still the record for the most goals in a single match in the top division of English football.

Arsenal would not win the league title for another season after their FA Cup win. Manchester City would best them the following season, before they pipped Wolves to the title in 1937/38 by a single point. Drake missed more and more games through injury during this time. He only played 26 games in 36/37, but still managed 20 league goals as Arsenal finished third. The next title winning season he played 27, scoring only 17 as injuries mounted.

Drake’s formal at Arsenal also helped him achieve his dream of playing for England. He managed to earn himself 5 caps for the Three Lions before World War 2, scoring an excellent 6 goals. His debut was in the infamous “Battle of Highbury”, where his 12th minute strike proved to be the winner, in the 3-2 victory over Italy. The famous Guissepe Meazza scored Italy’s two, and was the man who the San Siro stadium was named after.

Despite being Arsenal’s top scorer for 5 seasons in a row since joining, 1939 proved to be the end of his football career. Europe broke out into war, and he was conscripted into the Royal Air Force at ages just 27. He still played in unofficial wartime matches for Arsenal, but they were only when he was on leave from duty. These matches also did not count towards his official statistic.

He would return to play for Arsenal after the war. However, in 1945, catastrophe would strike. In a match against Reading, he would suffer from a spinal injury which would ultimately force him to retire.

Drake ended his Arsenal career with three league titles and one FA Cup winners medals to his name. He played 186 games for the Gunners, scoring 139 goals. He currently sits joint fifth on Arsenal’s all time top scorers record, with Jimmy Brain.

Ted Drake would later move into management. He managed Chelsea, where he became the first man to win the First Division as a player and a manager. He helped transform the clubs image and recruited players from the lower leagues into his title winning squad.

Ted Drake sadly passed away on 30 May 1995, and you can read his obituary in The Independent here.