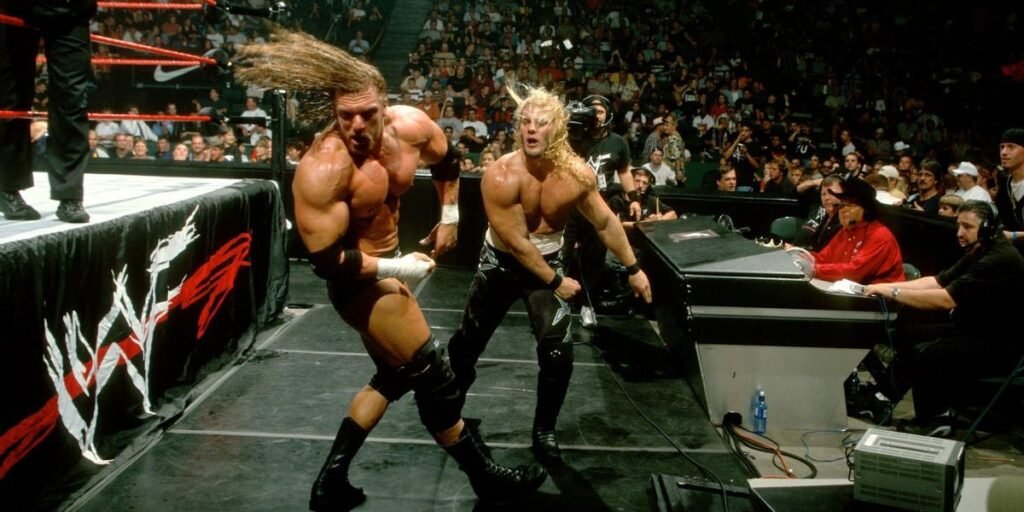 Triple H won the match vs Chris Jericho in a fantastic match, narrowly getting to his feet after a nine count after hitting Jericho with a belly-to-back Suplex through a table. It was an exciting, yet dangerous ending, one that had fans talking for years and kept them chanting for Y2J for months.

However, the ending to the match was meant to be very different, and much safer, for Chris Jericho. And the blame came down to his old nemesis, and someone who had made his life hell in his first year in the WWE. Former WWE Women’s Champion, Chyna.

In his book “Undisputed: How to Become World Champion in 1,372 Easy Steps”, former WWE and AEW Champion Chris Jericho revealed how Chyna caused the ending of the Chris Jericho vs Triple H Last Man Standing match from Fully Loaded 2000 to be changed, in a way that could have caused serious injury to Chris Jericho.

In his book, Chris Jericho writes:

“Sounds great, right? Well, in theory it was, until my old buddy Chyna screwed the pooch and messed it up. Earlier in the night she had a match with Perry Saturn where despite the huge signs at Gorilla saying STAY AWAY FROM THE ANNOUNCE TABLES, they slammed into the table that had been specially constructed to break for our finish and broke it first. This was a scant twenty minutes before we were supposed to go on, and I was taping up in the trainer’s room when I saw our table (and our finish) fall apart.

“I told HHH casually, “Chyna and Perry just went through the announce table. We need a new finish.” Such are the trials and tribulations of live TV, folks. You have to go with the flow and roll with the changes, and after we discussed it for about three minutes, I suggested that we could still do the belly-to-back through the table, only start from the barricade right next to it. The problem was we had no idea where I would land.”

“Would I slide right off the table and whack my head on the cement behind it? But it didn’t matter as we had run out of options. It was time to remove all the wheel blocks, there’s no time to waste. So when it came time for the finish, I rammed HHH onto the table and climbed the barricade to moonsault him. He clocked me from behind and away we went.”

“It was a strange and slightly terrifying feeling because I had no idea where I was going to land and couldn’t see where I was anyway. I held my breath and prepared for the worst, but we landed on the table at the same time and it blew apart easily. My head whacked the edge of the table but luckily not the concrete itself. I breathed a sigh of relief as the crowd began chanting, “Holy shit!”—their equivalent of saying, “Nice work, gentlemen, we appreciate the hard work and oh my was that ever impressive.” – SOURCE

If Chris Jericho vs Triple H had ended differently, and the planned spot had not gone to plan, Chris Jericho could have landed wrong and been injured, or even worse. It was a risky bump that they took, and only due to Chyna and Perry Saturn ignoring clear instructions by breaking the announce table and spoiling the ending to HHH vs Chris Jericho.

What did you think of Chris Jericho vs Triple H? Let us know in the comments or click below to read more.