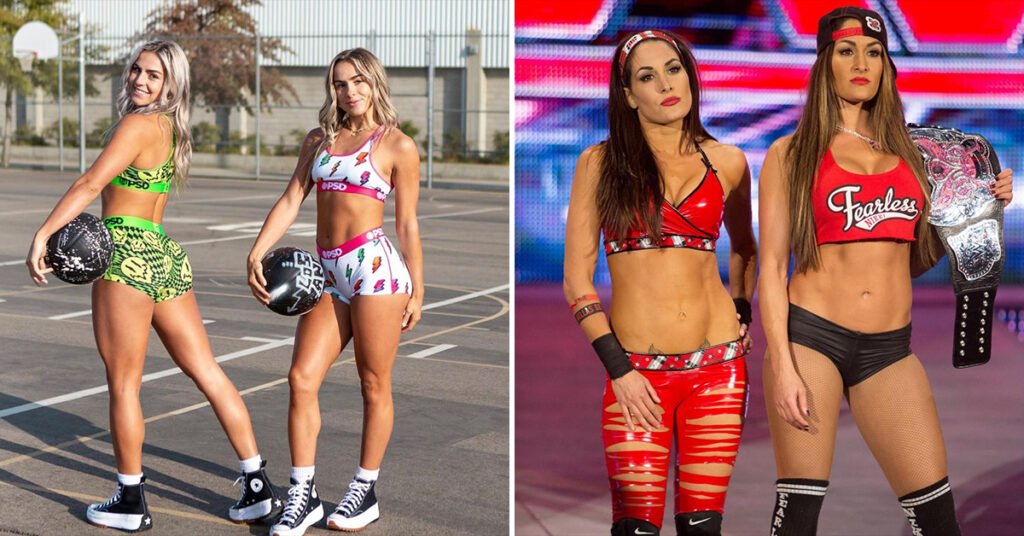 In recent months, WWE has completely redeveloped it’s own development system. Long gone are the days of signing premier talent from the independent scene, and WWE are back to signing non-wrestling athletes and moulding them into WWE wrestlers, like they did with stars Brock Lesnar and Batista.

While the likes of Gabel Steveson and Bron Breakker have been the faces of this change so far, WWE may have found the next Bella Twins with the signings of the Cavinder Twins.

Who are the Cavinder Twins?

WWE’s newest signings to their “Next in Line” College recruitment program were revealed this week. Gabel Steveson, the Olympic Gold Medalist, was signed earlier this year as the first man under the program, but WWE have since announced the first class of college athletes signed to WWE.

Two of the names on the list of signings are college basketball stars Hayley and Hannah Cavinder. The Cavinder Twins do not have a background in the wrestling business, but are twin sisters who play basketball for the Fresno State University women’s team.

Hayley and Hannah Cavinder are also big on social media. The pair boast 330,000 followers each on their Instagram accounts, and a staggering 3.8 million followers on Tik Tok.

Their profile has grown and grown becoming some of the most famous college athletes in the United States. Due to their growth in social media and their performance in basketball (being their universities top scorers), they were profiled by ESPN which only helped grow their imagine.

However, they were previously unable to license their image to make money from their college careers. However, new law changes in the US meant that they are now free to sign with the WWE NIL program, This means that they can license their name, image and likeness through WWE and make money of themselves.

The Next Bella Twins

Fans and journalists have raved about the twins, with some claiming they could be the next Bella Twins in WWE. While the Cavinder twins do not have any background in wrestling and have not trained to become professional wrestling, that is not a barrier to becoming a professional wrestler.

The Bella twins were in a similar position to the Cavinder Twins prior to signing to WWE. Both Nikki and Brie were models, whilst Nikki played soccer in University before a knee injury side-lined her career. Both Bella Twins were discovered by the 2006 WWE Diva Search, a competition set up WWE to discover future women wrestlers for the company.

Most Diva search competitors were models and athletes who had no wrestling background. These women were first hired by WWE, then trained in developmental to become WWE Superstars. This is most likely the route that will be taken by the Cavinder Twins, when they graduate college. The likelihood is that they will be sent down to NXT to train at the WWE performance centre.

Wrestling Observer’s Dave Meltzer noted that the Cavinder Twins had been looked at by WWE prior to the birth of the WWE NIL program. Internally, they were viewed as potentially successors to the Bella Twins, with their athletic ability and social media presence a key factor in the decision.

Both were being looked at as recruits by WWE prior to the NIL program with the idea of the success of the Bella Twins. You can see that looks are part of it, but they are real top-tier athletes.

Dave Meltzer on the Cavinder Twins