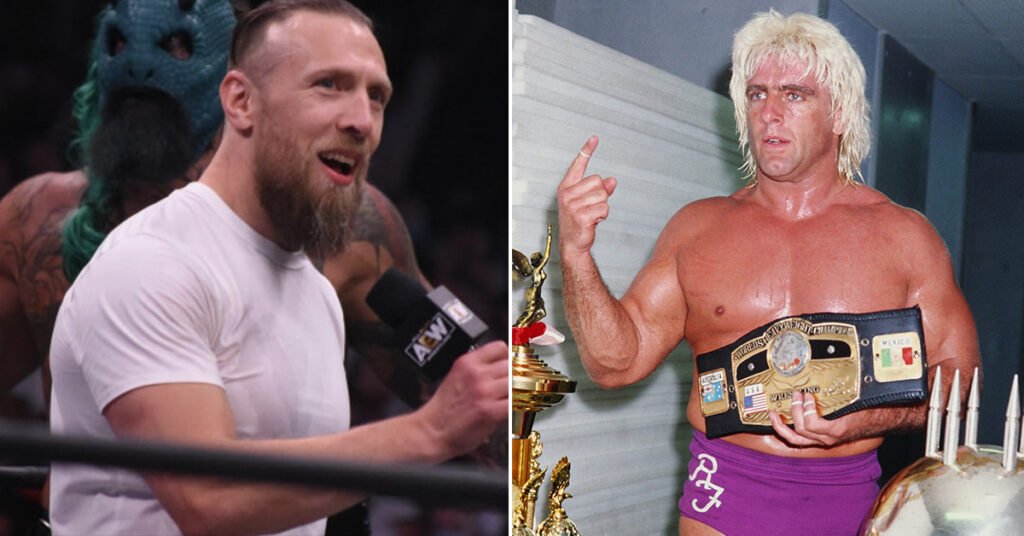 “The Nature Boy” Ric Flair has never been one to shy away from controversy. He has never been one to not speak his voice, no matter how outspoken, and the recent Dark Side of the Ring episode on Flair’s escapades on the Plane Ride from Hell has made him a pariah in wrestling in recent. Ric Flair has recently called out Bryan Danielson, formerly Daniel Bryan, and it was not all positive.

On his podcast Wooooo Nation Uncensored, Flair was asked about his opinion on the work of Bryan Danielson, who was known as Daniel Bryan in WWE. Bryan had a lengthy feud with Flair’s former Evolution teammates Triple H, Randy Orton and Batista, so will have worked closely with people that Flair trusts expressly.

While all those men have spoke glowingly about Danielson, Flair may have a different opinion. While he compliment Bryan’s work in the ring, he negatively compared him to other wrestlers like AJ Styles and Kenny Omega, as well as claiming that Triple H “Made Him” at Wrestlemania 30″.

Ric Flair said that Bryan Danielson was “Okay” and when pressed about what that meant, he went on to clarify his stance.

“I didn’t say he wasn’t a good worker. When Hunter put him over at [WrestleMania 30], that made him. He’s a very talented kid, don’t misunderstand me, but you have to have one match, one place, one day, somewhere that makes you who you are. Hunter, who only wrestles once in a while, came out and the match started off slow but they ended up having a world-class match. He’s a hell of a performer, I don’t see him as being Kenny Omega. As a babyface, he’s not Ricky Steamboat. As a heel, he’s not me. If that pisses people off, they have to live with history.“

When asked again about his thoughts on Bryan’s matches at Wrestlemania 30, he once again proffered his opinion. Daniel Bryan took on Triple H in the opener at Wrestlemania 30, beating him before defeating both Randy Orton and Batista in the main event.

“They tore the joint down. That is the night that made Bryan. I like him a lot personally. He’s got a style…he’s not AJ Styles by any means, he’s a little bit smaller than AJ, he’s not AJ Styles. I like his conditioning, he works hard, he’ll do anything and sacrifice his body at all odds. He’ll throw himself around and take incredible bumps. He’s a hell of a hand. You’re asking me who is good and who is great. He’s very good. As a babyface, it’s more believable. He can sell his ass off so when he’s making a comeback, it’s more fun to watch him make a comeback against bigger guys. It’s harder for me to believe he’s going to hold someone down. As a babyface, who is just average size but loaded with talent, I much prefer to see him fighting from underneath.“

Bryan Danielson fans may not be pleased with the Nature Boy’s assessment of the American Dragon. He claimed that he is smaller than AJ Styles, and “He’s not AJ Styles”, claiming that Styles does what Bryan does and does it better. It is a fair opinion, as both men are two of the best of all time, and Flair is a noted fan of AJ Styles since their time in TNA together.

He did go on to say that Bryan Danielson is a “hell of a performer”, clearly showing that he does rate The Dazzler as a top performer. Although, he did also go on to say that “I don’t see him as being Kenny Omega”, implying that he does not see Daniel Bryan or Bryan Danielson as being a supreme in ring talent nor a top heel or babyface in the company.

Not to put down the American Dragon too much, Ric Flair did say that he would have liked a match against Bryan Danielson whilst in his prime. However, the 16 time World Champion did clarify that he would have to be the heel in the match, with Bryan as the face.

He clarified this stance, making it clear that he rated Danielson more as a babyface than a heel.

” As a babyface, it’s more believable. He can sell his ass off so when he’s making a comeback, it’s more fun to watch him make a comeback against bigger guys. It’s harder for me to believe he’s going to hold someone down.“

What do you think? Is Ric Flair right about Bryan Danielson? Is he worse than AJ Styles and Kenny Omega?

Credit to Fightful for the Transcription