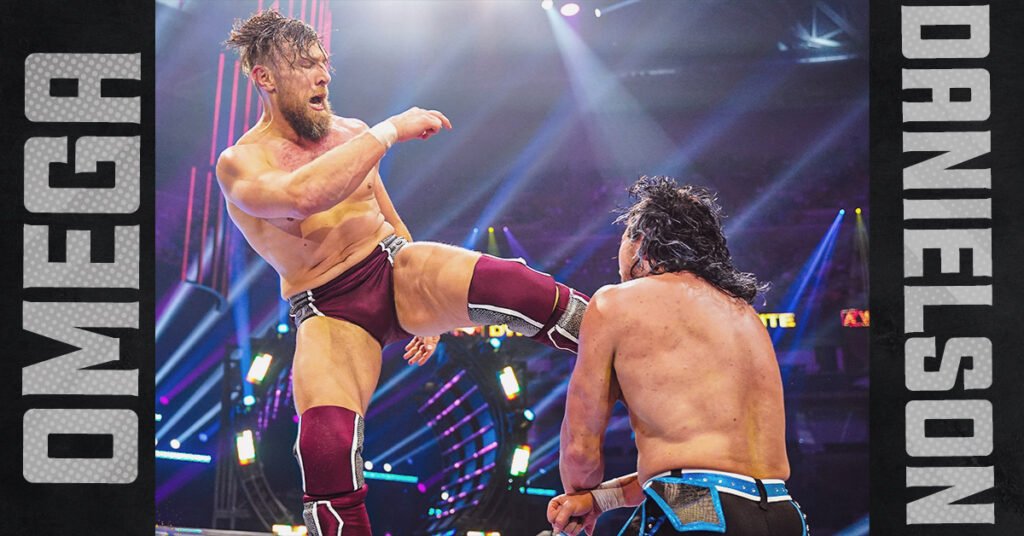 Do you think Bryan Danielson vs Kenny Omega was the best AEW match of all time?

When AEW announced that Kenny Omega was facing Bryan Danielson on AEW Dynamite, fans expected a match that couldn’t possibly live up to expectations. Well, it just did. Bryan Danielson vs Kenny Omega is a five star classic, and is the greatest match in AEW history.

I do not use that term lightly. Hangman Adam Page and Kenny Omega vs The Young Bucks was the best before in my opinion, and not far behind was the incredible Young Bucks vs Lucha Bros cage match.

While those matches were incredible, there are many reasons why the dream match of Bryan Danielson vs Kenny Omega lived up the hype, and then some.

AEW Grand Slam was the setting for this monumental clash. I was fully expecting to stay up until 3am tom watch this match, and frankly I was happy to.

But then that genius that Tony Khan is, the mad genius, opened the show with Bryan Danielson making his entrance.

They’re not squishing this match in at the end “with TV time remaining”. He’s giving them the full thirty minutes that they need, and they used every second of it.

I have never seen a crowd pop so hard simply for the bell ringing. But this crowd at the Arthur Ashe Stadium exploded when the bell rang and the match started.

The anticipation for this match to start had been too much and they finally got to see two of the best of all time lock horns in an AEW ring.

They wwere ready for Bryan Danielson vs Kenny Omega.

The match started off with some excellent chain wrestling. For a man who hadn’t wrestled since April, Danielson was as sharp as ever.

He worked Omega’s arm, ready to lock in the LaBelle lock whenever he could to win the match. The arm injury also helped Danielson stop Kenny Omega hitting his One-Winged Angel, a move which only one man has ever kicked out of.

The early technical wrestling was a sight to watch, with both men doing their best chain wrestling at impressive speed. You’d think these men had been wrestling each other for years, and not separated for the best part of 12 years.

After this, both Kenny Omega and Bryan Danielson trades a flurry of kicks and chops. Danielson alternated between kicks and chops, with the crowd chanting “Yes” and “Woo” at the appropriate time. Omega hit a number of V-Triggers, each one looking incredibly brutal. Very early in the match, Bryan’s chest was red raw from the chops from Omega.

At one point, Omega hit a buckle bomb on Bryan, which launched him over the top rope and onto his wrist. Despite many watching worrying about Bryan’s health, Dave Meltzer confirmed that Danielson is fine and that it was just incredible selling. The wrist also looked damaged after Danielson’s arm got caught under Omega on an avalanche back suplex moments earlier.

Control the match switched back and force, with both men pulling out exciting moves, like Bryan’s Cattle Mutilation with garnered a huge pop.

His unmatched selling went to another level next. The pair wrestled on the outside, with Bryan hitting a knee from the top rope to Omega’s skull. Omega then hit Danielson with a SnapDragon Suplex on the ramp, which Bryan sold like death. I genuinely thought the match was over, that they’d have to call it due to injury because Bryan was injured.

Bryan Danielson vs Kenny Omega was quickly becoming my favorite match of all time.

But he wasn’t. But he was next, when Omega ran down the length of the ramp to nail him with a V-Trigger from hell, which was hit with so much force that it launched Omega himself into the ring.

Bryan Danielson vs Kenny Omega carried on for a good ten minutes after this match, with both men countering, countering and countering. Brutal kicks, slams and chops were the order of the day, and both men could argue that they came closest to winning.

Bryan tried to lock in the LaBelle Lock late on, trying to win the match by submission. However, the bell rang as the pair brawled, ending the match as a time limit draw. The crowd booed, both for the result and the fact that these men weren’t allowed to wrestler for the entire two hour AEW Dynamite show.

The draw was the best option for the match. The pair were still fighting as the bell rang, and were so entrenched in their war that they didn’t even notice the ringing. It surely sets up a rematch in the future, where maybe Bryan could usurp Hangman Adam Page as the man to beat Kenny Omega.

Bryan Danielson vs Kenny Omega is THE greatest match in AEW history. It may be the greatest free TV match of all time. For me, it is up there with Omega vs Okada and Bryan Danielson best matches. It is a wrestling clinic, and a match that is worth a rewatch literally immediately after watching.

Bryan Danielson made me think he was dead, his selling was so good, and even for a fleeting moment made me want him, not Hangman Adam Page, to beat Kenny Omega for the AEW Championship.

This match is a five star match. And the scary thing is, both men were clearly holding back, for the inevitable pay per view rematch. I will be waiting with baited breath for that match, and hope that they pull out a match just as good as this one.

What did you think about Bryan Danielson vs Kenny Omega? Do you think it was the best AEW match so far? Let us know in the comments or click below to read more.