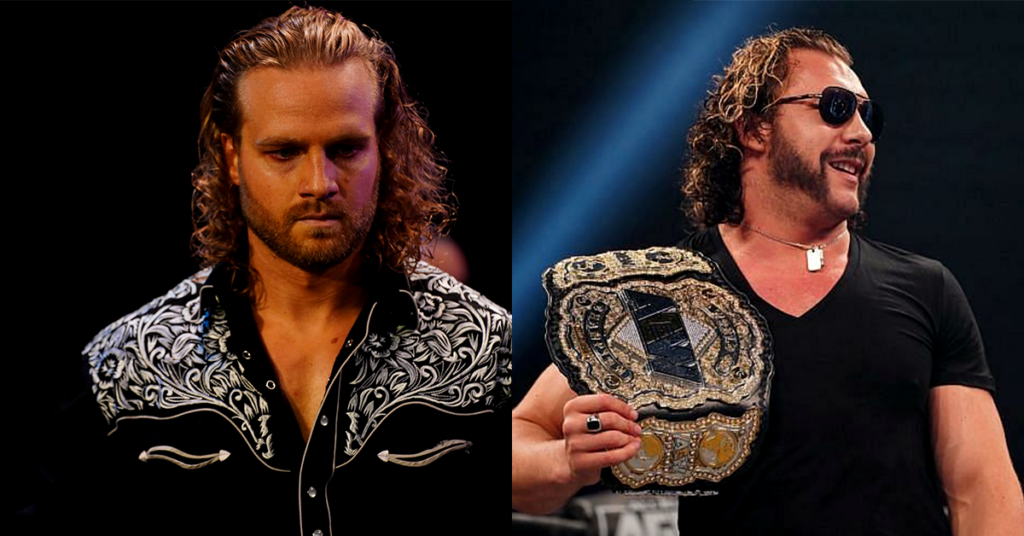 The story of “Hangman” Adam Page, Kenny Omega and the Elite has been a story that has ran since the beginning of AEW. Adam Page was the first man to challenge for the AEW Championship. He lost the match to decide the first AEW World Champion at AEW All Out 2019 to Chris Jericho, and hasn’t challenged for the belt since. Adam Page’s character is one that needs the championship, but his own demons and emotions wont let him get it. Whether it’s his reluctance to trust his friends, or his fear of failure, there’s always been one reason why he just can’t make it to the top of AEW. But Adam Page needs to beat Kenny Omega for the AEW Championship, and it needs to be as soon as possible.

“Hangman” Adam Page enjoyed a tumultuous relationship with his fellow Elite members in AEW. He felt ignored and let down by his friends, especially the Young Bucks during his time in the group. Adam Page felt like he let his friends down by losing to Chris Jericho for the AEW Championship, and his friends felt that he abandoned the group and went out on his own.

The Young Bucks attempt on the AEW Tag Team titles left a sour taste in Hangman’s mouth. Hangman Page felt that the Bucks were trying to diminish his success. He felt that they were trying to take his greatest accomplishment as soon as he’d earned it. He felt overlooked and overshadowed as part of the Elite, as he was the least successful of the members prior to AEW.

The Young Bucks saw Adam Page as ungrateful, not appreciating how the Elite had brought him into their circle of friends. As they said in an interview prior to AEW Revolution 2019 “You were just a jobber in Ring of Honor before we brought you into the Elite”. They thought that Page was taking advantage of their friendship then leaving them at the first sign of success, and taking their best friend Kenny Omega with him.

Omega was stuck in the middle of the feud, trying to make peace between Hangman and the Young Bucks. He clearly wanted to help the pairs friendship to work out, but was frustrated more by Hangman’s part in the break up. The ending of their win against the Young Bucks shows this. After retaining the Tag Team title, Kenny stays with the Bucks while Hangman leaves alone.

Adam Page and Kenny Omega teamed up to become the second ever AEW Tag Team Champions. They beat SCU on the Jericho Cruise to win the titles, which they held for a number of months. The best match in their reign was the AEW Revoltion bout against the Young Bucks. The four men went nearly thirty minutes in an action packed, emotional filled match. Omega and Page won the match, but Page seemed even further distant from the Elite.

This culminated when Page was duped by FTR into thinking he was there friend. They saved him from attacks and drank beer with him, all the while with one eye on his AEW Tag Team Championship. Page even interfered in a match to stop the Young Bucks winning, so they would not face he and Omega again for the Championships. However, FTR turned on Page, revealing they had been manipulating him all along,

This strained his relationship with Omega, who thus far had been trying to keep the Elite together as friends. Hangman’s actions had been too much, and the pair of them seemed to no longer be on the same page. This showed in their title defence against FTR at AEW All Out 2020. Hangman Adam Page and Kenny Omega were not on the same page, making mistakes and eventually succumbing to FTR. They lost the tag team championship, and one of the saddest moments in wrestling history happened.

The Saddest Moment in AEW

The pair stood in the ring, with Hangman taking the brunt of the offence in the match. Omega is holding a wooden chair, looking set to hit Page and destroy their friendship. However, he throws away the chair, and does something much, much worse. He looked to Omega for support, to hold him and tell him everything is okay. But it isn’t. Hangman falls into the arms of Omega, but Omega is nowhere to be seen. He sidesteps Page, letting him fall unceremoniously to the floor and back out of consciousness. Omega leaves through the heel tunnel signalling his exit from his friendship with Page.

The Dark Order & Feud with the Elite

Over the next year, Hangman Adam Page was recruited by the Dark Order as their newest member. Page rejected their proposal, but kept up his association with the group as he finally accepted them as his new friends. Since the loss of the Elite as his friends, Page was fearful of letting anyone else into his life. He didn’t think he could take anymore pain, so he simply shut himself away. But the Dark Order, inspired by the death of their leader Brodie Lee, turned to making life bright for Adam Page. They wanted to inspire him to become the best wrestler he could be, and to win the AEW Championship.

But they could not. Hangman Page and the Dark Order took on the Elite in a tag team match. It was a five on five, Survivor Series style elimination match. If the Dark Order won, then Hangman Adam Page would receive a AEW Title shot at All Out 2021. One year after he and Omega went their separate ways, it seemed inevitable that the cowboy would win the match and show Omega how good he really was.

The Elite spoil the party

But tricky and deception prevailed, as the Elite won the match. Page felt responsible for the loss, despite being the last man standing against Omega and The Young Bucks. He also felt like he let his team down, due to the other stipulation of the match. If the Dark Order won, then they would also receive a title shot, in this case against AEW Tag Team Champions The Young Bucks.

Page went out the next night to apologise to the Dark Order but was ambushed and beaten down by the Elite. He has not been seen since. Page blames himself for letting down his team. Bad things keeps happening to the Hangman, and those around him. He sees himself as a poison that no matter what, will keep infecting those he loves. He feels like he has to leave in order to stop bad things happening. The Dark Order had showed him that his friends still stick with him even in defeat, but he needs to come to that realisation on his own.

What Next for Hangman Adam Page?

Page also knows that some things he needs to do on his own. While he values his friendship with the Dark Order, he knows his successes in the past have been judged on the back of the Elite. His signing with AEW was because he was part of the Elite. His tag team title win was in partnership with Kenny Omega. He needs to achieve something because of himself in AEW, and no-one else.

He’s distancing himself from the Dark Order for that reason. He told them himself to not interfere, to not save him. This has caused riffs in the Dark Order itself, with some wanting to help him, and others wanting to listen to what he says. There is no wrong answer here, but seemingly no right one. All the Dark Order can do is be supportive of Page, and support him in achieving his dream of becoming AEW Champion.

Page needs to return to AEW soon. Kenny Omega looks set to square off with Bryan Danielson, the legendary wrestler who made his AEW debut at All Out. Danielson has the backing of Christian Cage and the Jurassic Express. This could nullify the interreference of the Elite, and give Omega a fair fight for the first time in his title reign. Danielson certainly has the pedigree to defeat Omega.

He is a five time World Champion in WWE, and has beaten legends of the sport like John Cena, Triple H and Batista. He has beaten men with more World titles than Kenny Omega, and in their primes too. Omega will be going into this match as the underdog, against a man who has beaten the best wrestlers in the biggest company in the world. Omega has cheated his way to victory one too many times, and now it is a fair fight, he has a good chance of losing his championship.

But he shouldn’t lose to Bryan Danielson. Hangman Adam Page NEEDS to be the man to beat Kenny Omega. Page’s last 2 years in All Elite Wrestling have built up to this. He needs to show Kenny Omega that he is better than him, that it was the Elite holding him back, not the other way around. Page needs to show the Dark Order that he can do this one his own, and doesn’t need anybody else helping him win.

Most importantly, he needs to show himself. He needs Hangman Adam Page, the anxious millennial cowboy, that he is not a failure. That he is not a loser. That behind all the drinking, insecurities and fear of failure, is one of the best wrestlers in the world. Winning the championship will justify everything Hangman believes, and proves any doubts he has to be wrong. Deep down, he knows he can do it. The fans know he can do. Even Kenny Omega knows he can do it. He just needs to dig in, believe in himself and go and do Cowboy shit.