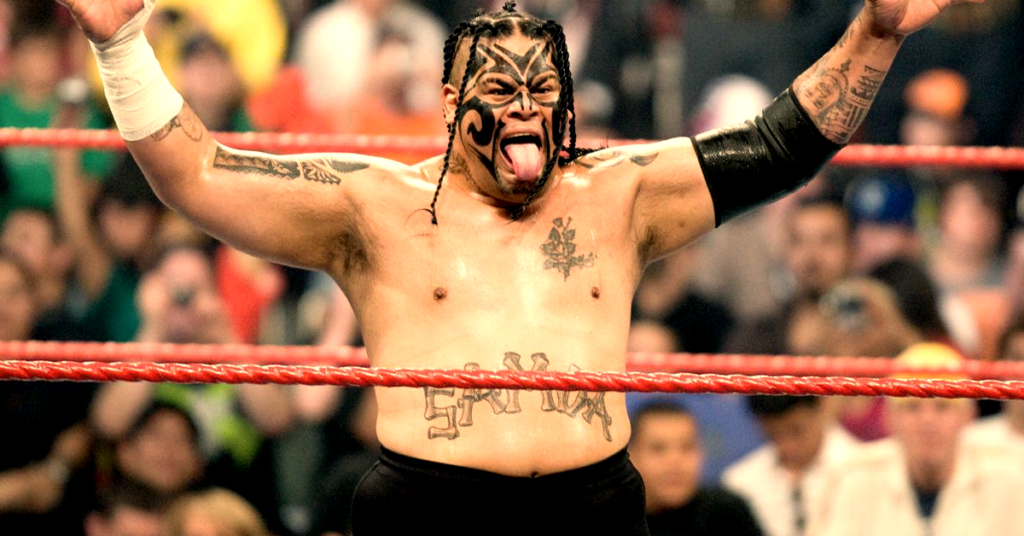 What happened to the Samoan Bulldozer? The man who destroyed John Cena and wreaked havoc on Monday Night Raw? And has he earned his spot inside the Hall of Fame? Is Umaga in the Hall of Fame?

The Samoan Bulldozer, Umaga, was the worlds scariest wrestler when I started watching wrestling in 2006. His crazy face tattoo’s that I was CONVINCED were real, the way he’d be all like BLAHHHHHHHHHHHH when murder fools in the ring, and the deadly Samoan Spike finisher made him terrifying for a 10 year old me.

The night is April 3rd 2006. The night after Wrestlemania 22. Ric Flair is stood in the ring. One day removed from him losing in the second ever Money in the Bank ladder match, he vows that it isn’t the end of his quest to become World Heavyweight Champion, Woooo!

But then comes a Cuban man, who announces himself as ARMANDOOOOOO! ALEJANDROOOOO! ESSSSSSSSTRADA! This man is the manager, or probably more aptly titled wrangler of the debuting monster, the Samoan Bulldozer, Umaga. Umaga, announced as “A new American Hero”, and the man who is “going to change the face of WWE”, comes out after a back and forth between Estrada and Flair, and he looks particular mental. He’s a large Samoan man, his hair all black and crazy, his face covered in tribal tattoo’s, and he was wearing a blue and white sarong, as he lurches menacingly towards the ring. I can’t emphasise enough how crazy he looks.

Umaga proceeds to destroy the WWE Hall of Famer Ric Flair, hitting all his signature moves. He hit Flair with kicks, headbutts, a Samoan drop, his corner hip attack move which he made famous, and the terryfingly deadly and looking back not that scary, Samoan Spike, where Umaga thrusts his outstretched thumb into his opponents windpipe, rendering them unconscious.

You just know if someone is willing to beat up an old man who’s just had a 6 man ladder match, then he’s a bit of a meanie. He defeated Flair at Backlash that same year to announce himself truly on the big stage of WWE.

One of the biggest moments of Umaga’s short WWE career was his intense fued with then WWE Champion, John Cena. Having an almost year long undefeated streak, beating top stars such as Kane, Triple H and Shawn Michaels, Umaga was named number one contender to John Cena’s world championship. At the time, this seemed like it could be the end of Cena’s run as champion. No-body had defeated this monster. He had destroyed all comers, and beaten down Cena at every opportunity on Monday Night Raw.

Cena beat Umaga by roll up in their first encounter, but that wasn’t the big moment. At the Royal Rumble, the second biggest pay per view of the year, he challenged the Champ to a Last Man Standing Match for the Title. In a brutal match, involving weapons and big kicks and big boys slamming big belly’s into smaller but still big boys, Cena won a grueling match, the best of Umaga’s career in my opinion, by submission, as Umaga passed out to Cena’s patented STFU while also being choked out by the ringrope. It was a big loss for the Samoan Bulldozer but a great match and made Cena and Umaga look great, and free’d Umaga up to challenge for other championships in the future.

Despite winning the Intercontinental Championship from Jeff Hardy, the next biggest accomplishment by Umaga was at Wrestlemania 23. The mental man with sharpey on his face was hand picked by the Chairman, Vince McMahon, to represent him vs a wrestler of Donald Trump’s choice. This was dubbed “Battle Of the Billionaire’s” in which the losing Billionaire would have their head shaved by the other.

The match was an incredibly high profile affair, even being refereed by legendary wrestle-man “Stone Cold” Steve Austin. In a whirlwind affair featuring interference from Vince, Trump, Vince’s mental son Shane who jumped across the ring to kick a rubbish bin into Donald Trump’s chosen wrestler, Bobby Lashley. Trump and Vince brawled at ringside after Shane and Umaga attacked Stone Cold.

Unlucky for them, Stone Cold is more than adept at hitting fools with Stunners, as he went to hit the aforementioned fools, with aforementioned stunners. After a Stone Cold Stunner to Umaga after attempting his Samoan Spike, Lashley hit Umaga with the Spear, pinning him for the win. Stone Cold proceeds to Stunner everyone in the building, including Donald Trump and drinks copious amounts of beer.

Again, another loss for Umaga, who frankly should have been given some big world title runs in his short tenure there. A big guy who could move well and had some horribly violent looking moves, and was super duper scary to 10 year old me.

A Wrestlemania 24 match again Batista, in a Battle of the Brands match, apparently happened but i have literally no memory of it, so here’s a photo of Batista.

I don’t think it’s too much to say that Umaga was the best. Just the best. I can’t tell you how scared I was that he was going to murder John Cena and Jeff Hardy. When they beat him I was like Jesus Christ how did they do that. Him being dead has nothing to do with him being on this list, I just wish he hadn’t left when he did. The world could use more Umaga right now in these trying times. Because he was scary and had face tattoos and should’ve been champion.

Check out the other entries in my Hall of Fame Series