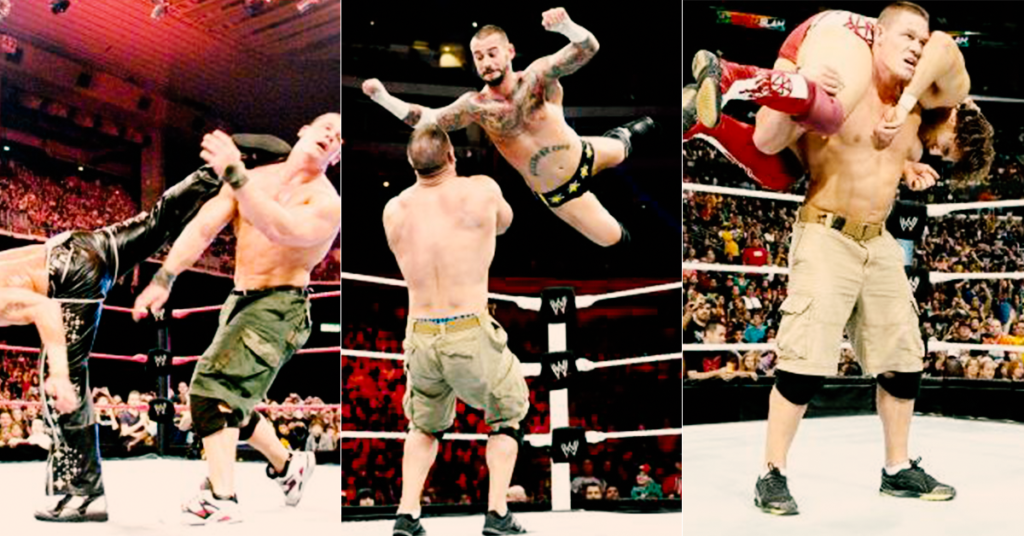 The Champ is Here!

Despite being embroiled in some China-based controversy in recent days, John Cena is still undoubtedly one of the biggest stars in wrestling history. He has had some incredible matches in WWE. The best John Cena matches are the cream of the crop in WWE. The 16 time World Champion has recently returned to WWE for Summerslam. He will face Roman Reigns for his Universal Championship, vying to become a 17 time champion.

Few can argue against Cena’s impact on the injury, whether good or bad. He held the company on his back from his 2006 run as champion onwards. Others have claimed he has held down talents such as Alex Riley, Mr Kennedy and Ryback. If you believe his intentions to be pure or not, Cena has been the focal point of the WWE for over 10 years. He has had some incredible matches, like John Cena vs Great Khali from 2007.

From incredible feuds with CM Punk, the Rock and Edge, to duds with Alberto Del Rio, Damien Sandow and Bray Wyatt, Cena has faced the best the WWE has to offer and has given it his all.

The first in the list of John Cena best matches is The Champ vs The Heart Break Kid!

By 2007, John Cena was already polarising crowds. The women and children gleefully cheered. “Let’s go Cena” while the hardcore fans, mainly comprised of men in their early twenties, angrily retorted “Cena Sucks”. The duelling chants would persist for the next 15 years, becoming a key component of Cena’s character.

Cena faced off with fan favourite “The Heartbreak Kid” Shawn Michaels on an episode of Raw in 2007. The pair had been tag team champions together in their feud which took them all the way to the main event of Wrestlemania 23. John Cena would become victorious in that bout. He tapped out the legendary HBK to retain his WWE Championship using his signature STFU.

Raw was Live from London that night. One of the matches also scheduled was Rated-RKO team mates Randy Orton and Edge facing off with each other. However, due to Randy Orton being sent home due to alleged bad behaviour, that match was scrapped. This gave Cena and Michaels also an hour to pull off an incredible match.

Due to this, the match between the two went almost an hour. In what is the longest singles match in Monday Night Raw history, the Heart Break Kid countered a FU into a Sweet Chin Music, collapsing with exhaustion atop the Champ and getting the three count.

The pair would face off again in a Fatal 4 way match at Backlash, in a match including the aforementioned Edge and Randy Orton. Cena retained the Championship but that match is forgotten while the 55 Minute classic from Raw in London is one mentioned in the “Top 5 Matches” list ever since.

The second in the list of John Cena best matches is Cena vs Rollins vs Lesnar!

The greatest triple threat match I have ever seen. John Cena was searching for his 16th World title, aiming to match Ric Flair’s record by recapturing the championship he had lost to Brock Lesnar at Summerslam 2014.

Seth Rollins was Mr Money in the Bank, a slimy heel who months prior had broken up one of the greatest teams in wrestling history. Seth Rollins aimed for his first title, and his cocky demeanour was backed up by supreme in ring talent.

Brock Lesnar was the Beast. He’d ended the Undertaker’s undefeated streak, he’d destroyed John Cena at Summerslam, and it looked like no-one could defeat him. Like he would never lose the Championship. Unless of course, he didn’t need to be pinned to lose it.

That is the story of the match. Both men try to take down the Beast, leaving the other to fight them man to man. A fast paced match with some huge spots such as double German Suplexes, flying knees caught into F5’s and flying elbow drops through tables, for over 20 minutes they have you on the edge of your seat, willing that the three men could never stop wrestling.

Lesnar would be victorious, popping up at the end with German suplexes and an F5 to Rollins. Lesnar went on to lose the Championship to Rollins’ MITB cash in at Wrestlemania. However, the Rumble match was a modern classic not easily forgotten.

Next in John Cena’s best matches is the start of the most frustrating storyline in WWE that led to one of it’s greatest moments.

The match was a simple build with Bryan telling Cena how he was a real wrestler. How Cena was merely a pretend wrestler, a “Sports Entertainer”. He told the story how in Japan they’d slap their opponents, to show respect and fire up their opponent. Bryan refused to slap Cena, disrespecting the legend.

To be fair, the Game did call the match right down the middle. The match was incredible. Both men gave it their all and even calling back spots from their encounter on Velocity in 2003. Both men pulled out moves rarely seen, such as Bryan’s surfboard stretch, and Cena even ventured to the top rope.

Bryan debuted a new move, the Running Knee (Solid Knee Plus is what it should have been called). Bryan broke Cena’s nose with a sniff knee to the face and pinned him to win the WWE Championship.

But then distater struck. As Daniel Bryan celebrated finally reaching the top, he turned around to a pedigree from Triple H. This let Randy Orton slither in like the snake he is, and cash in his MITB contract to take the steal the Championship.

The match remains one of Daniel Bryan and John Cena best matches of all time. However, it somehow did not get the Meltzer 5 star seal of approval.

The most recent match on the list and one of both men’s best matches, this was the bout that launches Kevin Owens immediately into stardom.

The match was an incredible back and forth contest, with both men pulling out moves never seen in WWE before. Cena hit Owens with Canadian destroyer, and Owens hit a number of moves I personally had yet to witness. He even hit a variation of his package piledriver, which is banned in WWE.

2 pop up powerbombs and one roaring crowd later and Owens’ picked up the victory. It send the crowd – and me, sat at home alone at 3am – in shock and awe, that Cena would be beaten, and beaten CLEAN by a debutant from NXT.

The pair would have a further 2 matches, but John Cena was at his best when facing someone with the hunger of Kevi Owens.

There were a couple of Cena vs Punk matches that could have made this list, but this one stands out as John Cena’s best matches ever.

Fresh of his famous “Pipebomb Promo” CM Punk was the hottest thing in wrestling in years, garnering outside attention from mainstream media and wrestling fans alike.

CM Punk was disgruntled by WWE management not shining the spotlight on him, so planned to leave the company after this match and go on to wrestle in other companies, professing he would go to New Japan, or Ring of Honour.

Cena was the WWE Champion, defending against Punk who wanted to take his WWE title from him and away from the company he loved. The rivalry boiled over to searing heat, with Vince McMahon threatening to fire Cena if he lost, and Punk insulting Cena and McMahon.

The match was an instant classic, earning a 5 star rating for respected wrestling journalist Dave Meltzer, and receiving critical acclaim from fans around the world, named as John Cena best match of all time.

Both men showed incredible work rate and psychology, with Cena’s desperation to stop Punk taking the title away apparent. The crowd in Chicago, Punk’s hometown, was fiercely anti-Cena and pro-Punk, and was one of the hottest crowds I’ve ever seen.

Punk escaped with the title in shocking fashion, after Vince McMahon tried to interfere, which Cena refused, and attempted to have Alberto Del Rio cash in his Money in the Bank contract. Punk escaped through the crowd with the Championship, blowing one last kiss to Vince McMahon in an everlasting image. It will go down as John Cena best match of all time, and maybe the greatest in all of WWE history.

If you liked this post, check out Bret Hart Worst Matches

2 thoughts on “Best John Cena Matches of all time: The Top 5!”