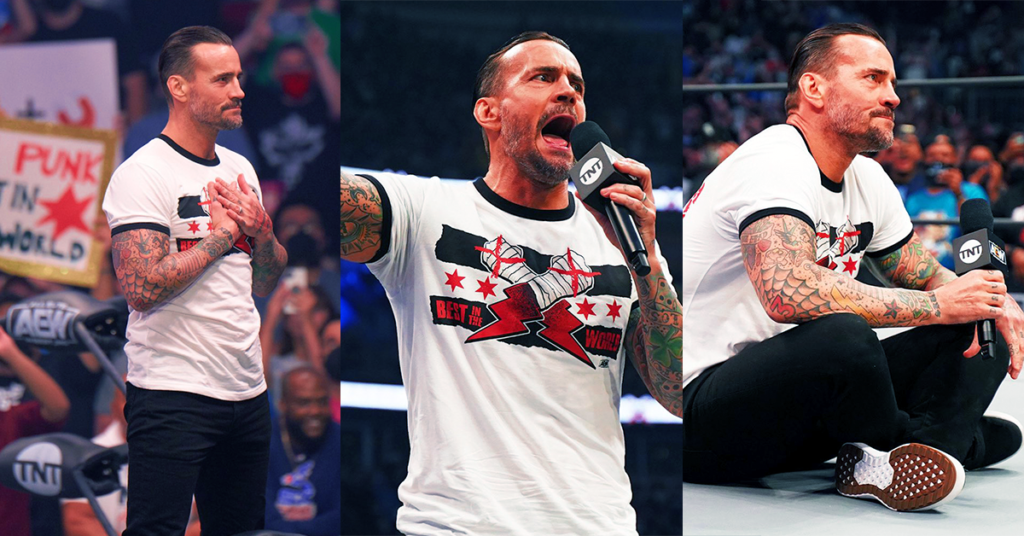 CM Punk AEW debut blew the roof off the AllState Arena in Chicago last night. 15,000 people opened the show chanting for CM Punk as loud as they could, before that familiar static could be heard. The speakers then exploded into the verse of “Cult of Personality”. It was one of the loudest pops ever heard in wrestling and was an event seen around the world. CM Punk trended in 10s of countries around the world, and Shop.AEW crashed almost as soon as Punk walked out on stage. The debut of CM Punk truly made waves around the world.

The show opens as the four commentators welcome us to AEW Rampage. Well, thats what I thought they said. You could barely hear Excalibur rattle of the names of the team as the deafening “CM Punk” chants filled the arena. The fans knew exactly what was about to happen but none of them quite believed it when they got what they’d been dreaming of for seven years.

A static shock sound filled the arena. Slightly longer than they remembered but thats okay. As soon as the first note of Cult of Personality hit, the fans blew the roof off the arena. And the huge pops kept on coming. The crowd, who seemed to be at fever pitch, managed to get even louder as they spotted CM Punk walking out of the tunnel. The crowd were unbelievably loud as he knelt down on the stage. He sat there for a while. Taking in the love from the crowd that he had missed the past 7 years. Punk even seemed to shed a tear as he remembered all the time he had lost. But all would explained very soon.

After a dive into the crowd and hugging various people around the ring, CM Punk finally made his way into the ring. He took his time making it to the ring, taking in the adoring crowd chanting his name. He grabbed a microphone, the one weapon that he used better than anyone in WWE, and began to speak.

The First Promo in AEW

Punk’s opening remark was not one that anyone would have imagined.

“I’m winging this. We’re winging this. “We.” That’s a very important distinction. We’ll get back to it. But I didn’t plan on what I was going to say because I didn’t know what to say, because I didn’t know how I was going to feel, but I knew that I needed to feel it. I feel you, Chicago. And I hear you, Chicago!”. CM Punk later said that this was true, he did not plan what he was going to say. He even said he was nervous, but that meant he felt something about wrestling again.

The crowd then start more incredibly loud CM Punk chants, as they have for his entire AEW debut.

“That’s what I’ve heard for seven years. I heard you. I heard you. And we got a lot to cover. There’s good news and bad news. The bad news is we’re not going to get to it all right here right now. But the good news is, is I’ve got the time. Wednesday, Friday, four Sunday or Saturdays a year. I got the time, and I ain’t going anywhere.” This was excellent news. This basically confirmed CM Punk’s full time status in AEW, and the fans felt the exact same way as me, elated.

I got the time and I ain’t going anywhere

If, at all through my journey, any of my personal choices or decisions related to my life made you feel disappointed or let down, let me just say… Let me just say… I understand, if you all try to understand that I was never gonna get healthy physically, mentally, spiritually, or emotionally, staying in the same place that got me sick in the first place.” This was the emotional part of the promo, but not why CM Punk intended. He thought that people were let down by him leaving. Like he failed them. But the fans never felt let down, they just missed him. Listening to him talk on Colt Cabana’s podcast, it was obvious he had to walk away from WWE seven years ago.

Can I tell you guys a story? It’s hot in here. Hang on one second.” Punk removed his jacket to reveal the new official CM Punk shirt. Yes, I bought it immediately. Also yes, the site crashed and they took my money but without an order number. Also yes I’ve sent them 12 emails already to sort it.

Can I tell you a story?

Punk sits crossed legged in the middle of the ring. This gets a massive pop as you’d imagine. He could shit his pants and half the crowd would cheer. This man is a God in Chicago

“Can I tell you a story? You see, I felt before like I had to leave. I didn’t want to, but I knew I couldn’t stay, and that was when I used to work for a place called Ring of Honor. “

“August 13th, 2005 was my last match in Ring of Honor, and I famously came out with tears in my eyes, and walking out here today, I now know why I was crying. And it was a lot of reasons. But what it boiled down to was, I had made a place where people could come work, get paid, learn their craft, and love professional wrestling. “

“And I cried because I knew I was leaving a place that I love, and it was a home, and I knew where I was going, wasn’t going to be easy for a guy like me. Because I’m one of you. So I look at it like this: August 13th, 2005, I left professional wrestling.”

Punk got back to his feet, and the intesity comes back to his voice. He’s ready to fight and he doesn’t care who knows it.

“Darby Allin.” The camera cuts to the top of the arena. Lurking in the rafters is Darby Allin and Sting. Reminiscent of Sting stalking the NWO in 1997, Darby Allin was stalking CM Punk.

“I see you. You’re good. I’ve seen you jump out of airplanes, I’ve seen you wrapped up in a body bag and chucked over the top rope, I’ve seen you kicked down a flight of stairs, and you always come back. Just like each and every person here in Chicago, you’re tough. But I’m here to help, and you’re the first on the list. I’m gonna help you because you’re a daredevil and you like danger. Well, Darby Allin, there is nothing you can do that is more dangerous than wrestling CM Punk. Except wrestling CM Punk in Chicago. I will see you, and I’ll see Sting, and I’ll see all of you September 5th. At All Out, live on pay per view. I’m back!”

He’s back. It’s official. The internet has exploded, cats and dogs are living together and hell has frozen over. CM Punk is back. And CM Punk is in AEW.

“Oh, one more thing. Seven years is an awful long time to wait for somebody. I appreciate everybody here who has waited. So on your way out of the United Centre tonight, grab yourself a free ice cream bar on me.” Tony Khan has done what Vince McMahon could only dream of. Getting CM Punk back to wrestling and giving him his fucking Ice Cream Bars!

The CM Punk AEW debut was complete, and I cannot wait to see him face Darby Allin at All in!