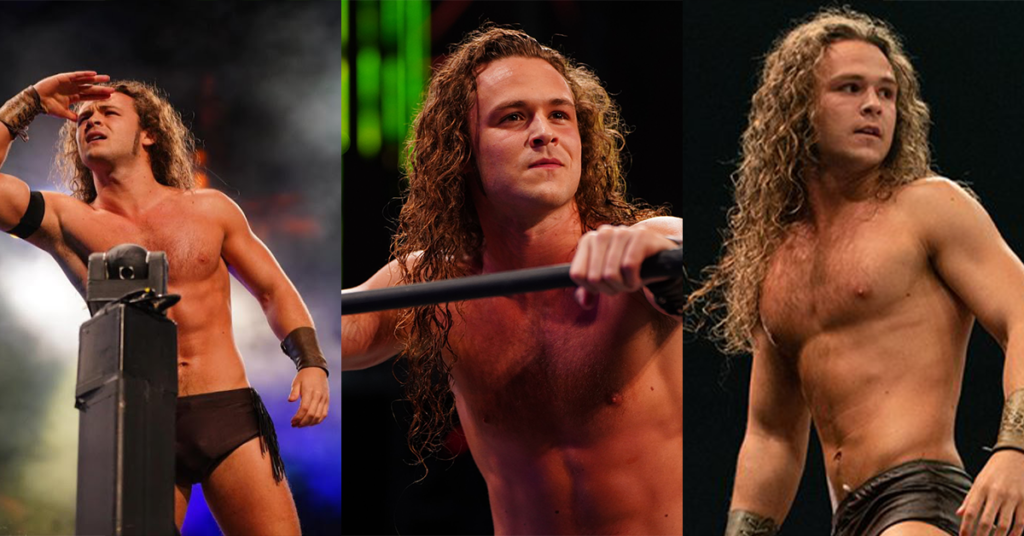 I have written at length about how Jungle Boys is the future of AEW. I think he is one of the top stars, and the fan reaction at AEW Double or Nothing shows he is one of the most popular stars on the roster. With Jungle Boy, AEW has one of the finest young talents in America. Here we will list Jungle Boy best matches in AEW.

Jungle Boy has had some amazing matches in AEW, against some opponents that would say they were their best matches as well. He has had great singles matches. He has had great tag team matches. Even 6 man matches with his Jurassic Express stable. Additionally, he has shown himself to be decent on the microphone too, as well as in backstage interviews. He has everything in him to become the face of AEW, like Sting in WCW was.

He has had some very good matches in AEW, hence why he is now #1 contender for Kenny Omega’s AEW World Championship. But what are the best Jungle Boy AEW Matches? Here I’ll rank them one to five, and let me know what you think!

The first match on this list is one of his early AEW outings. Then AEW Champion Chris Jericho began antagonising the Jurassic Express weeks prior, and it came to a head when he claimed that Jungle Boy could not last more than 10 minutes in a ring with him. This sets up a match for Dynamite, where the pair face off in a match with a 10 minute time limit.

The match starts out at lightening fast pace, with Jungle Boy trying to beat Jericho early. Not content with just lasting the 10 minutes, he wants to beat the Champion. However, Jericho hits two Codebreakers, incapacitating Jungle Boy. He goes for the pin, but heelishly lifts the young wrestlers shoulders, elongating his punishment.

The match ended with Jungle Boy being locked in the Walls of Jericho for nearly two whole minutes. His selling and screams of anguish are top tier, and it has you shouting at the scream willing Jungle Boy not to tap, and to beat the AEW World Champion. He doesn’t tap, and achieves what he set out to do: Last ten minutes in the ring with Chris Jericho.

The then restarts and Jericho wins, but Jungle Boy showed that he could hang with the main eventers for the first time in AEW.

The match that setup to the number one match on the list of Jungle Boy best matches. The tag match between the future Pinnacle pair and Jurassic Express was one that came in with little build. but wowed the audience anyhow.

This fast paced encounter featured power and work rate. The monsters Luchasaurus and Wardlow provided the big man spots, while MJF and Jungle Boy worked the matt and provided the moments that made the crowd gasp.

MJF and Wardlow ran out the winners, and set up the singles match between MJF and Jungle Boy at the next pay per view, AEW Double or Nothing.

One of the matches that made fans realise what a star both Cody and Jungle Boys were.

A match that had no story coming into it, apart from the experience Rhodes facing off with the new-kid-on-the-block, Jungle Boy. The pair engaged in a quick paced, NWA-style match that was definitely of Cody’s design.

It was the first of Cody’s many TNT title defences, until he was ousted by the late Brodie Lee. Jungle Boy may have come up short, but it will surely build into the story when he finally does defeat Cody, some time in the future. It told a great story, and that is why it is number three on the list of Jungle Boy best matches in AEW.

The match took place in a broader feud between Jurassic Express and FTR. Although it took place on a taped episode of Dynamite, it was one of the most anticipated matches on AEW Dynamite history. The tri of Jurassic Express were feuding with FTR, with the latter even kidnapping Marko Stunt and tying him to the chair in their bus.

The feud eventually ended when FTR, with their manager Tully Blanchard, defeated the Jurassic Express in a six man tag match, but this match between the two singles competitors was certainly the highlight of the feud.

The match on Dynamite proved to be a star making performance. The pair wrestled circles around each other, and showed that both men would not be out of place in a main event setting. Jungle Boy eventually won by submission, but both men came out on top that night.

This match gave us a glimpse of the future of AEW main events. Number one on Jungle Boy best matches is his Pay Per View bout against the despicable Maxwell Jacob Friedman. The pair had not been feuding for long, and a sole tag team match between Jurassic Express and MJF/Wardlow was used as a setup for the match.

Both men were looking to climb up the rankings for this match, with MJF actually facing the AEW Champion Jon Moxley at the next big Pay Per View, All Out.

This match was a proper old school match. The pair traded holds, worked body parts and worked a match with an expert grasp of psychology. Both men showed experience beyond their years and pulled out what I consider to be the match of the night at the show. It is certainly number one on Jungle Boy best matches in AEW and beyond.

Check you ‘The Death of WCW”, the hit book about the rise and fall of WCW and the Monday Night Wars