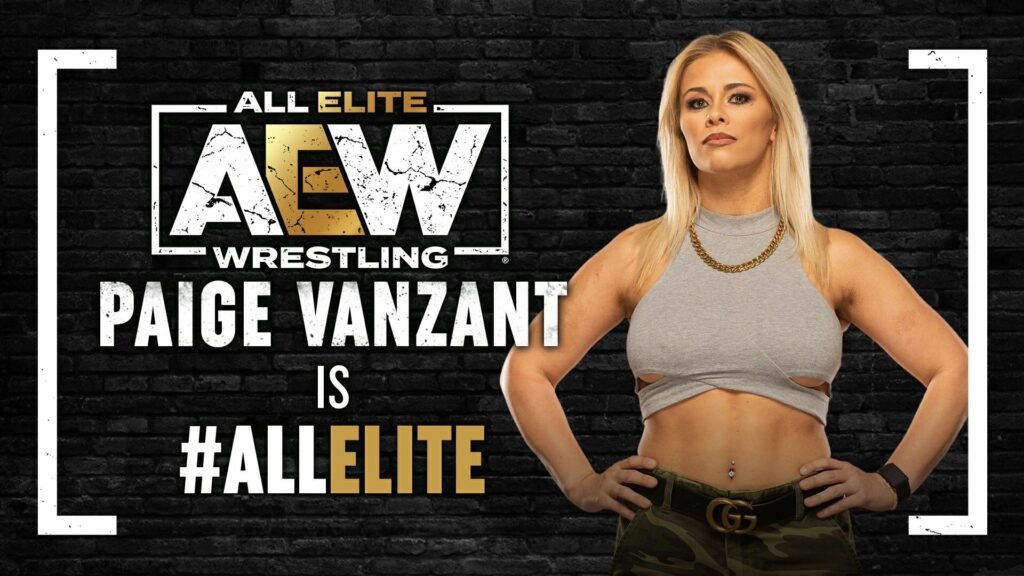 Will we see Paige VanZant vs Tay Conti in AEW?

Her interference helped Sky win Guevara’s TNT Championship and extend his winning streak to a whole year of singles matches. VanZant brawled with Conti outside the ring during and after the match, and looks set to feud with the Brazilian star in the near future.

Paige VanZant vs Tay Conti may take a while to come to fruition, however. By all accounts, Paige VanZant has not done much, if any, wrestling training, as she is currently signed to the Bare Knuckle Fighting Championship.

Bare Knuckle Fighting Championship released a statement after her AEW debut, claiming she was still “under contract” with the promotion and that they wanted to “work together” to form a partnership with AEW.

“Paige is still under contract with BKFC. The companies (BKFC & AEW)will work together to build her career.”

Who is training Paige VanZant?

Whilst she may not have started training yet, Paige VanZant is scheduled to begin her pro wrestling training imminently. The former UFC fighter is scheduled to move down to Pompano Beach in Florida to train at Coastal Championship Wrestling.

According to Marc Raimondi, she will be trained by David Heath, better known as Gangrel,. The former WWE star was scheduled to an appearance for AEW last summer, but Tony Khan nixed the idea after Edge performed his “Brood” entrance at Summerslam 2021 (Edge, Christian and Gangrel were a faction of vampires in WWE known as “The Brood”.

It looks likely that the match of Paige VanZant and Tay Conti was originally meant have involved Cody and Brandi Rhodes. Brandi Rhodes had a number of awful segments with VanZant and her American Top Team manager Dan Lambert on AEW Dynamite.

It seemed to be building to a match between Brandi Rhodes and Paige VanZant, and would also include Cody Rhodes vs Ethan Page, and eventually Cody and Brandi vs VanZant and Paige. How, Cody and Brandi Rhodes were the latest AEW releases when their contracts expired on February 15th and they were released from the company.

With Sammy Guevara winning the TNT Championship from Cody Rhodes before dropping it to Scorpio Sky, it is likely that it would have been Scorpio Sky beating Rhodes if he had re-signed with the company in February.

Instead of Brandi Rhodes vs Paige VanZant, it is likely that we will see Paige VanZant vs Tay Conti on an episode of AEW Dynamite. Depending on how long she spends training in Florida with Gangrel, it took take event longer for Tay Conti to get her hands on the bare knuckle fighter, so a showcase match at Double or Nothing 2022 could be the time for VanZant to debut at AEW.

However, due to her limited experience, it’s likely that a mixed tag team match between herself, Ethan Page/Scorpio Sky, Sammy Guevara and Tay Conti is more likely to take place. A mixed tag match like Ronda Rousey’s debut in WWE, one of the best debut matches ever, would be a good idea for the 27 year old fighter-turned-wrestler.

Are you excited to see Paige VanZant vs Tay Conti? Let us know in the comments or click below to read more