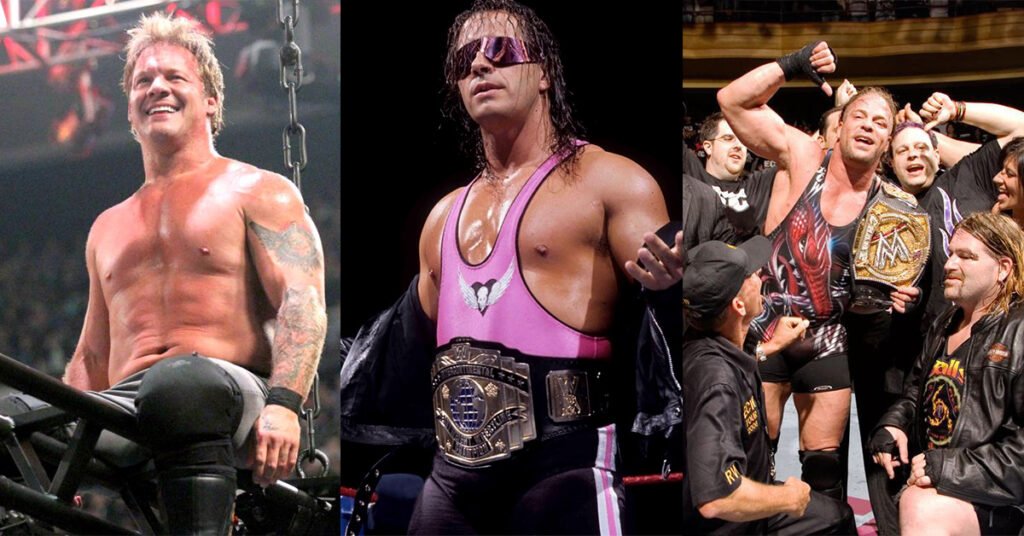 In recent years there has been a boom in professional wrestling books. WWF star Mankind (Mick Foley) started the trend when his book “a” became a New York Times best seller, and the genre has gone from strength to strength. It was the best wrestling book when it was released, but the amount of top quality wrestling books available has grown. Whether your a WWE, AEW, WCW or NJPW fan, there’s always a book for you.

Some of the best wrestling books are written by wrestlers. From Bret Hart to Mick Foley, wrestlers have been writing best sellers since wrestling broke the mainstream. AEW star have been getting in on the act too. Along with Chris Jericho, all of the Elite have written books themselves. Jon Moxley has a new book coming out for Christmas this year. Tony Khan of AEW called it “One of the best wrestling books of all time”. High praise for a man who is such a historian of Professional Wrestling.

Here are the top 10 best wrestling books you need by read in 2021. If any of them are of interest to you, check out our Amazon link below and see if you want to pick one up on Amazon!

Best Wrestling Books You Need To Read in 2021

The first book on the list of best wrestling books is HITMAN by Bret “The Hitman” Hart. HITMAN chronicles Bret’s wrestling career, all the way from his humble beginnings in the famous “Hart Dungeon”. It’s a very well written and you can hear Bret’s dry wit with every page. It is a very honest look into the life of a pro-wrestler. Bret makes sure nothing is left out – including his own indiscretions.

Learning about growing up in the Hart household is enthralling to read. Wrestling for his fathers company, Stampede Wrestling, he meets a host of crazy characters. From Andre the Giant, to Kamala, to the Dynamite Kid, no-one is left out. He even dragged a young Hulk Hogan to a decent match early in both men’s career! This is a must read for all wrestling fans. It’s an incredibly honest read and clearly Bret Hart but a lot of himself in this book.

One of the greatest of all time, Chris Jericho, writes one of the greatest wrestling books of all time. A Lions Tale details Chris Jericho’s journey from a small time wrestler learning his trade in Canada, to his travels around the world, from Japan to Europe to Mexico. The book finishes just before his historic debut in the WWF. it would be a great read for somebody interested in the journey of the wrestlers trying to make it big. Also fans of WCW and the wrestling scene in the 1990s. His following books go into detail about his WWF run. So, if you’re more interested in that then try out those books instead.

Jericho’s voice and tone is very evident in this book. It’s clear it came from him, and not just sent off to a ghostwriter to write. At times his jokes are a little cringeworthy and unfunny, but overall the book is very funny. A great read and one of the must read wrestling books out there.

One of the most fun wrestling books you’ll ever read. Alvarez and Reynolds dry sense of humour is apparent from the first page. They retell the tale in great detail about how WCW went from the biggest wrestling company in the world, to going out of business just 5 years later. They provide stats and figures as well as numerous interviews with wrestlers and backstage personnel to figure out just it all went so very wrong

Daniel Bryan – YES! MY IMPROBABLE JOURNEY TO THE MAIN EVENT OF WRESTLEMANIA

Another autobigraphy from one of the greatest of all time. Daniel Bryan’s book is not as tell-all and scandalous as Bret Hart’s autobiography, but does provide a very interesting background onto his career, and the independent scene as a whole in the early 2000s.

Bryan Danielson, as he is actually named, talks about his first failed WWE run, to making it as the King of the Independent scene and Ring of Honours biggest stars. He writes about his whole career up until Wrestlemania 30, with each page prefixed by a snippet of Bryan’s life the week leading up to his famous Wrestlemania victory. It is one of the best current wrestler books you can buy, and as a fan of Daniel Bryan or simply the independent scene, it is a must buy.

The Young Bucks – KILLING THE BUSINESS

A great insight into one of the best tag teams of all time. The book chronicles the Young Bucks, Nick and Matt Jackson, from their childhood all the way to the formation of All Elite Wrestling. “Killing the Business” is written by both brothers, with each written by a different brother. The book is an easy read and is a great lazy Sunday reading for any wrestling fan. Fans of AEW will need to read this if they are interested in the stars of the company and how AEW came to be. It is one of the newest released on the best wrestling books list, and one I heavily recommend.

Hardcore History, not to be confused by the Dan Carlin podcast of the same name, is a comprehensive history of the rise and fall of ECW. Extreme Championship Wrestling gained fame in the early to late 1990s as an alternative to WWF and WCW wrestling. It provided fans with brutal. hardcore wrestling characterised by its use of blood, steel chairs to the face and thumbtacks in the back.

The book features interviews with wrestlers who were there, as well as fans, executives and personalities who were there and helped ECW become the pop culture icon that it was. ECW fans from the 1990s will love this bool reliving their favourite moments.

Next on the list of best wrestling books is the comprehensive guide to the history of New Japan Pro Wrestling. Chris Charlton chronicles the history of wrestling in Japan from it’s post war, American inspired origins. It goes al through the years of Japanese wrestling history, focusing on NJPW. It goes all the way to the modern day heroes of Kazuchika Okada and Hiroshi Tanahashi.

Each chapter discusses a different time in the history of New Japan Pro Wrestling, and regales you with tales like Antonio Inoki splitting off from JPW to form NJPW, and his in ring rivalry with Giant Baba. A fantastic read for any NJPW fans, or anyone getting into the promotion watching the NJPW G1 Climax this year.

If you like the looks of any of these books, check them out via our Amazon Affiliate links in the body of the article. If you have any suggestions for more of the best wrestling books, put your suggestions in the comments. Or, Tweet us at @Atletifo on twitter, Instagram or Pinterest.