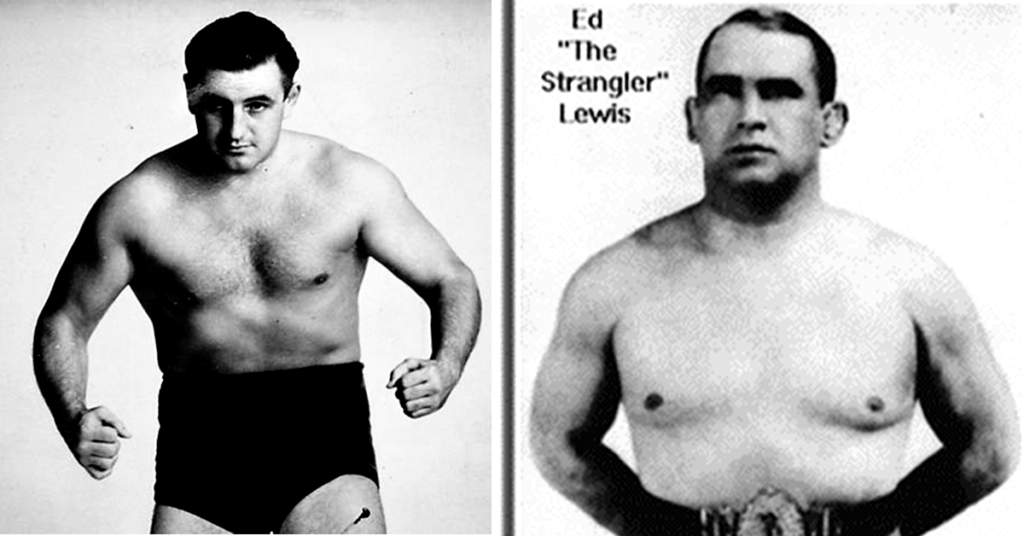 When you hear the words “Montreal Screwjob”, a few words come to mind. Bret Hart, Shawn Michaels, Vince McMahon and Earl Hebner spring to mind. Mr McMahon screwing Bret Hart out of the WWF Championship. But did you know this wasn’t the first screwjob to happen in Montreal. There was an original Montreal Screwjob!

The original Montreal Screwjob took place in 1931, in a feud between Ed “Strangler” Lewis and Paul Bowser. It was a tale of one promoter screwing another, and then him screwing back. Whether it was a shoot or a work is debated even today, and historians still have not reached a consensus.

The story of the original Montreal Screwjob starts with Paul Bowser in 1930.

Paul Bowser was a professional wrestling promoter, who was allied with Ed “Strangler” Lewis and Billy Sandow in Boston. He created the American Wrestling Association (AWA) in 1930. This is not to be confused by the AWA, the Verne Gagne owned promotion which was formed in 1961.

Bowser recruited a amateur wrestler by the name of Ed Don George to be one of his main stars. George had finished fourth in the 1928 Olympics in the Heavyweight class of Wrestling. This gave him an air of legitimacy, which was a huge aspect of wrestling in the early days. With the perception that the fights were real, being a Olympic wrestler made sure you were one of the toughest guys in the business.

Ed Don George began his professional wrestling training shortly after returning from the Olympics. He soon became a huge star of Bowser’s AWA, winning the AWA World Heavyweight Championship. He beat Gus Sonnerberg for the championship on December 10th, 1930, just two years into his professional career.

As one of the most recognisable sports stars of the 1920s, felt cheated. He felt that he was meant to be the man to beat Sonnerberg, and felt betrayed that he and partner Billy Sandow had been left out of the decision making of the Championship.

The pair were two thirds of the “Gold Dust Trio” along with fellow promoter Toots Mondt. The trio revolutionised the way wrestling was sold and presented around America. They developed the first wrestling storylines, and were among the first promoters to promote full undercards, not just a one-match main event show.

Ed Lewis was furious with Sonnerberg, but played along with the promoter and bided his time before he could get his revenge. He waited patiently for his opportunity, and was rewarded when he was awarded a title match with George on April 14, 1931 in Los Angeles. Ed “Strangler” Lewis would take on Ed Don George for the AWA World Heavyweight Championship.

Los Angeles was always a city where Lewis had a lot of fans, so expected the fans to be on his side during the bout. Despite being a fan favourite in the city, Lewis was set to lose. Lewis had placated Sonnerberg and agreed to lose the bout, even though he had every intention to walk out of LA as the new World Heavyweight Champion.

Ed Don George entered the arena fully expecting to leave as Champion. He had been told by Sommerberg that he was the AWA Champion going forward, and Lewis had done nothing to dissuade him. Nothing seemed out of the ordinary until the two men were stood in the ring. Just before the bout began, Ed Lewis informed George that he was going over in the match.

“We can do it the easy way or the hard way”

Lewis warned George that he had no choice in losing.

“Ok kid, tonight’s the night, and we can do it the easy or the hard way!” Lewis said to him in the ring. Despite being an Olympian in wrestling, Ed Don George had no confidence in beating Lewis in a shoot fight. Lewis had become the first ever Wrestling World Heavyweight Champion in 1920, and was a giant in the sport.

The fans, however, never thought that Lewis had a chance at winning. Lewis was a respected veteran, but there were a number of young up and comers coming through in pro-wrestling. Ed Lewis was seen as a decent scalp for a champion to claim, and there was still money to be made with him as a challenger.

George took the easy way out, and worked the match with Lewis. Realising he could not beat him in a shoot (real fight) match, the pair lasted 70 minutes before Lewis pinned George to win the first fall. Minutes later, Lewis applied a body lock/hammer lock submission, before pinning George’s shoulders to the mat. The referee counted the pinfall and announced Lewis as the new champion.

The fans were shaken. Ed Don George was the champion, an Olympian and the next big star of Wrestling. Lewis was past his prime and while still a star, looking to be the man to put the star over than to be the Champion.

Paul Bowser, when he heard the news from his home in Boston, was furious. Bowser allegedly didn’t think Lewis was championship material. He didn’t think the aging star of the 1920s was promotable as a champion. Some say that Lewis know that too, but his ego refused to let him realise it.

Bowser planned his revenge to take place in May of 1931, in Montreal, Quebec, Canada. Ed Lewis was set to defend the AWA World Heavyweight Championship against Henri Deglane. Deglane was an Olympic Champion, winning the Gold Medal at the 1924 Olympics in Greco-Roman wrestling. He was a Frenchman, so had the support of the crowd in the French province of Quebec.

Ed Lewis had little worry about the match. Despite going to work in a town run by Paul Bowser, he had no qualms. Of course, why would the man whose Championship you stole want to get revenge on you. Lewis was either too cocky or too stupid for his own good.

The match, like the one in which Lewis won the championship, was two out of three falls, As planned, the first fall fell to DeGlane, who’s arm lock followed by a flying mare won him the fall. Lewis was looking as old as Bowser percieved him. DeGlane danced around the ring, making him run around and waste energy. DeGlane also kept his hands up, blocking any attempt of Lewis to apply his deadly headlock (Yes, back then his “finishing move” was a headlock). The crowd went wild as their hero won the first fall, willing him on to go on and become the World Champion.

The second fall is where Bowser’s plan came into action. Nine minutes into the match, DeGlane managed to grab Lewis into a hold, pinning the champion for a near fall. However, after the kick out by Lewis, DeGlane jumped to his feet with an almighty yelp. He ran to the referee, still yelling, pointing furiously toward his arm. Just below his armpit was a red bite mark, with De Glane claiming he was bitten whilst in the hold. The referee called for the bell, disqualifying Lewis for biting. With that, DeGlane won the match two falls to nil, and was awarded the AWA World Heavyweight Championship.

But Lewis did not bite DeGlane. It was in fact a ploy, by Bowser and DeGlane, to get the title back off of Lewis. It was a plot of revenge from that night in Los Angeles, where Lewis stole the championship from Bowser.

In the dressing room prior to the match, DeGlane (or an associate, it is not sure) but himself in the arm. Just below the armpit, he clamped down, causing a clear bite mark and drawing blood. He hid this mark until the opportune time in the match, and snatched the title right back from Lewis.

Even to this day, people still debate the legitimacy of the Screwjob. Just like in Montreal in 1997, some historians claim that it was a work, used to get the title off Lewis but as to keep him looking strong. Steven Yohe, author of “Ed ‘Strangler’ Lewis – Facts within the myth”, has many points as to why he thinks it is a work, which you can read about here.