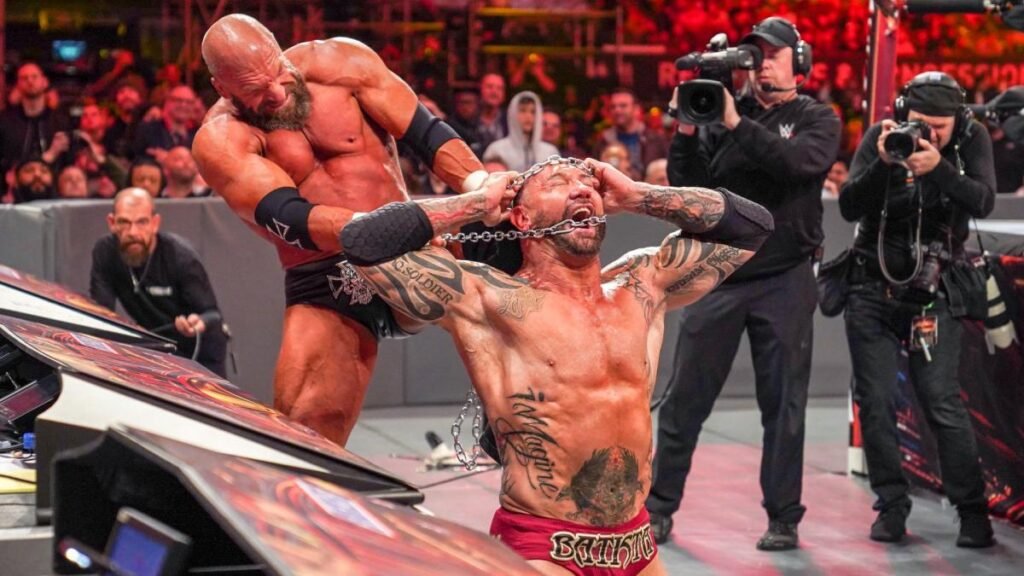 Batista vs Triple H was Batista’s last match in WWE, and despite interest from AEW, his entire career. He is now a full on actor in Hollywood, starring in hit movies like James Bond’s Spectre and the Marvel Avengers movies.

Batista is a legend in the wrestling ring, and one to take as much pain as he can dish out. However, even he had to call out Triple H for his brutality in Batista’s last match in WWE, as you will find out below.

Batista’s last match in WWE was at Wrestlemania 35, where he took on former Evolution teammate Triple H in a No Holds Barred match. The match also had a stipulation that if Triple H lost, he would be forced to retire from in ring competition.

The match was not one that was well received at the time. Both men hadn’t wrestled full time for years, and the match was a slow, methodical bout toward the end of an excruciatingly long long. Most fans were not happy to see too men pushing 50 go 25 minutes, even if the match was a well built yet brutally physical match.

One of the most disgusting spots was Triple H ripping the nose ring out of the face of Batista, and hitting a pedigree on The Animal onto the steel ring steps. Triple H would win the match and save his career, defeating his former protegee to save the reputation of himself and his friend Ric Flair, who Batista had attacked to get the match.

Batista would announce his retirement after the match. He had always said that he wanted his last match to be against his friend Triple H, and now he had his wish. He was due to be inducted into the WWE Hall of Fame in 2021, but had to pull out due to prior commitments. He is expected to be inducted as a headline act in one of the years to come.

Batista has revealed since that match that he thinks that Triple H went “too far” during their Wrestlemania bout. Despite being long time friends, the Animal pulled no punches when criticising the game for his action during Batista’s last match in WWE.

During the match, Triple H took a pair of pliers to the nose of Batista, yanking his nose ring from the cavity and ripping it from his nose. It was a brutal action, and one that Batista agreed was too far after his last match was complete.

In an Instagram post by WWE recapping the vile actions of Triple H, Batista commented accordingly, declaring the act of violence a “Terrible Display of Sportmanship”.

While Triple H managed to win the match against Batista, he did not do so in the realms of fairness, according to Batista.

What do you think of Batista’s last match in WWE? Let us know in the comments or click below to read more