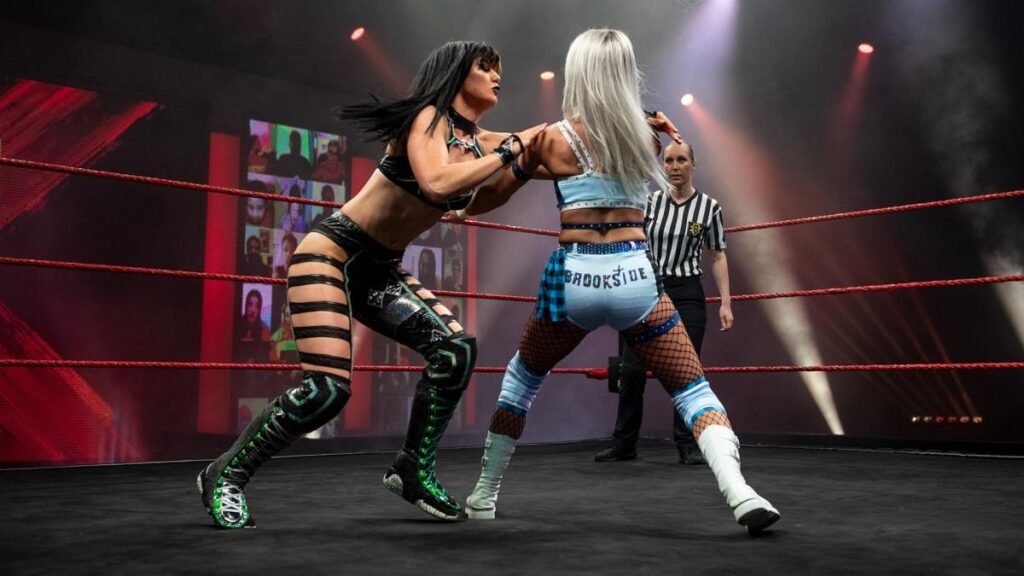 Formerly known as Bea Priestly in AEW, Blair Davenport is one of the young stars currently making their name in the WWE, in the NXT UK Women’s division. As one of the top young women in the country, the 26 year old has chased the United Kingdom Women’s Champion, so far being unlucky in her title fights.

Before she signed for WWE, Blair Davenport wrestled all across the world, from the United States to Japan and to her home country the United Kingdom. She is one of the premier talents in British women’s wrestling.

However, after a year with the company, she was unable to travel to the US from her home country of Japan (where she lived with partner Will Ospreay, a star of NJPW), and was subsequently taken off AEW tv. Her AEW contract was terminated in August 2020, due to her being unable to compete for AEW. She was one of the early AEW releases, although it is said it was an amicable agreement between Bea Priestly and AEW.

It would take another year, in June 2021, for Bea Priestly to leave AEW and sign for WWE. In between the two companies she worked with NJPW as a manager for her boyfriend Will Ospreay, although that did not stop her from signing WWE in June 2021.

She made her WWE debut on June 24, 2021 when a vignette hyping the debut of Bea Priestly aired on NXT UK. Bea Priestly’s new name was revealed as Blair Davenport in WWE, a vast change for her original name.

On speaking with Talksport about signing for WWE, Blair Davenport from WWE talked about making such a big move from Japan to the UK, leaving behind her boyfriend Will Ospreay. She reveals that the timing was right to sign with WWE, and that she had achieved all she wanted to do outside of Vince McMahon’s promotion.

“It was the right opportunity and the right timing for me. There were so many other things that I wanted to do first and I didn’t want to be in the position where I would make such a big jump in my career and wish I could’ve done things before coming here.”

Later on in the same interview, Blair Davenport (or Bea Priestly) described how she was let go due to the COVID Pandemic, and how travelling to Japan during the summer helped rekindle her love for wrestling and helped her get the courage to sign for WWE and become a star in that company.

Bea Priestly was cut by AEW due to Visa issues during the pandemic, and she has since been renamed Blair Davenport when she signed for WWE in 2021.

During the pandemic, there was a small window. Obviously, I got cut from AEW because my visa expired and there was no hope for a new visa happening at that time.

“There was a tiny window in August where people who had Japan visas could go back, so I went back to Japan. I loved STARDOM so much, but this time I think I was the only foreigner there, whereas before, I had a group of friends with me.

“I love the roster, but I did feel very isolated and I started to feel stagnant with my role and feeling like there was only so much more I could do with this company before I stayed in my same position. I hate being stagnant and I wanted to be like, ‘I need to do something for me now.’

“This is when we got in touch with WWE and we were chatting. I almost wanted a bit of time at home as well to have a bit of a rest, but I love NXT UK so much and it’s definitely where I want to be right now.“

Blair Davenport currently wrestles for NXT UK and is expected to be called up to NXT 2.0 or even the WWE main roster in the future, as one of the most highly rated stars in NXT UK women’s division alongside the likes of Xia Brookside.

What do you think of Blair Davenport in WWE? Did you prefer Bea Priestly in AEW? Let us know in the comments or click below to read more