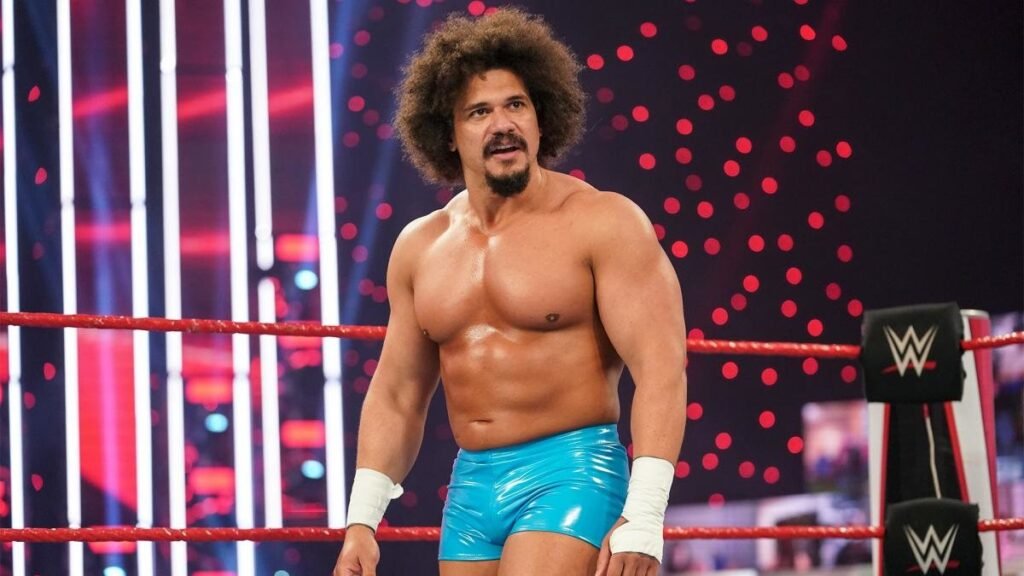 One of the biggest and most anticipate Royal Rumble surprise returns was the Carlito WWE 2021 Royal Rumble return. The Puerto-Rican wrestler returned to WWE for the first time since 2010, entering the match at number 8, and looked as good, if not better, than he did when he left the company 12 years ago.

Fans popped huge for the return of the man once named “Carlito Caribbean Cool” as he familiar music hit with his classic “I spit in the face of people who don’t want to be cool” tag line blaring through the arena.

Carlito had long been rumoured for a WWE return, and was one of the Ruthless Aggression Era fans’ most wanted return, along with the likes of Mr Kennedy and MVP, who did return in 2020. He was one of the most underrated stars of the era, and only backstage attitude stopped him from becoming a WWE Champion during his time with the company.

Carlito’s 2021 WWE return at the Royal Rumble was not his only WWE appearance upon his return, however. We also managed to witness a single Carlito WWE 2021 RAW appearance, on the day after the 2021 Royal Rumble. Carlito made a surprise appearance, teaming with WWE legend Jeff Hardy to take on the team of Elias and Jaxon Ryker.

Carlito revealed in an interview last year that he had received no communication from WWE after his Royal Rumble return.

The former United States and Tag Team Champion claimed that he was only booked for the Royal Rumble and Raw appearances, and has since had no communication with WWE regarding a return to the company.

The interview was part of The Angle podcast, and Carlito spoke about many things regarding his life, career and his WWE return in 2021.

It’s a shame that Carlito was not contacted by WWE after his return in 2021. Many fans were hoping for an MVP-type return, in which he was given a deal after impressing in the Royal Rumble match.

Carlito looked in great shape upon his return, looking bigger than many fans had ever seen him. He was unable to do his famous “Apple Spit” spot in the Royal Rumble match, due to the danger of spreading COVID-19.

Carlito claimed that his deal was always for two appearances with WWE, and that a full-time return to the company was not talked about.

“It was just the Rumble and I think the day before the Rumble they asked if I can do Raw too and I said ‘yeah, sure, whatever you guys need.’ That’s all we talked about. It was Raw and the Rumble. I’ve had no communication since the Raw appearance.”

Carlito on the Carlito WWE 2021 return

Carlito return as a producer?

Rumours began swirling after the 2021 Royal Rumble that Carlito was offered to return to WWE – but not as an in-ring talent.

WWE reportedly did not want to re-sign Carlito as a wrestler, but as a backstage producer. This would mean that he would be working with the current talent, helping put their matches together and guide them to tell the story that WWE management wanted in the ring.

However, if WWE did want Carlito in that role, they never mentioned it to him. In that same interview, he was asked about the opportunity to become a producer in WWE. Carlito noted that he liked the sound of that, stating that he would “be willing to listen to whatever at this point”.

But he never claims to have been contracted by WWE, and it seems as though it was simply rumour that they had any interest in Carlito.

“Yeah. A producer role or a trainer role. All of that kind of sounds intriguing,” he revealed. “I’m willing to listen to whatever at this point, but I think those would be interesting helping out the younger guys and help them develop, which would be something new for me. I think I’d find it fun to do.”

Carlito on returning to WWE as a producer

It’s a shame we never got a proper Carlito 2021 WWE return. He was a top talent in his day and surely still has a lot to offer to the business. Hopefully 2022 is better for Carlito and he gets a chance to work in WWE again. Because that’s cool.