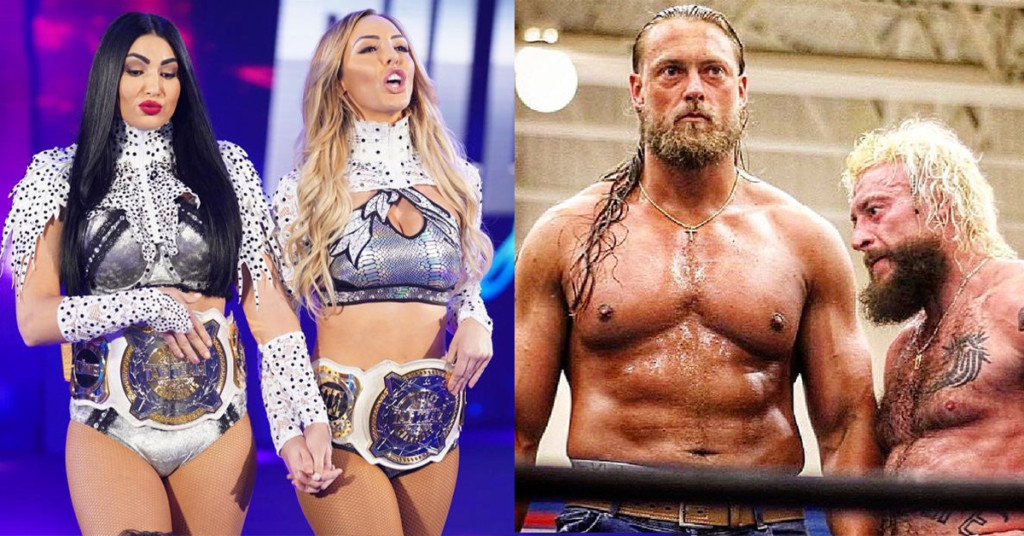 WWE and pointless tag team break ups – name a more Iconic Duo (see what I did there?). In WWE Tag Team break ups are one of the most pointless and annoying thing on the whole show. Vince McMahon famously hates tag team wrestling, and sees more money in the singles star than tag teams. Despite the fast pace exciting tag team work of the likes of the Young Bucks in AEW, or former NJPW stars Timesplitters, Vince would prefer to watch Big Cass versus the Big Show with Enzo in a cage hanging above the ring.

There have been so many tag teams that Vince McMahon has broken up seemingly just to spite himself. I honestly cannot fathom some of the teams on this list breaking up. It is mental. Here are 5 of the most pointless WWE tag team break ups that were awful ideas

First on this list of WWE tag team break ups is one that is objectively awful no matter how you look at it. The Australian pair of Peyton Royce and Billie Kay came through NXT together as the Iconic Duo, which became the Iconics on the main roster.

The duo became hilariously entertaining in promo segments, and were passable in the ring to keep up with the women on Smackdown. Billie Kay became one of the funniest promos in the company, while Peyton Royce’s in ring work made Vince think she had a future as a singles star.

So, on a random episode of Raw, it was decided that if they lost their next match, they’d never team up again. Yes really, that was literally the whole reason they broke up.

Neither was pushed as a singles star, and Peyton was one of the few women’s wrestlers who weren’t featured on Wrestlemania this year. Both women were released in the WWE cuts of April 2021, despite there being almost no women’s tag teams left in the company.

Why WWE decided to break up Heavy Machinery, I will never know. At least with other entries on this list, they seemed to have an idea of what they wanted to do. Awful, terrible ideas, but ideas nonetheless.

But when Tucker turned on Otis, costing him his Money in the Bank contract, there was no point. A week later, Tucker was drafted to Raw and the pair never had a feud. At all. Tucker turned on his only friend for seemingly no reason, and made Otis lose his MITB. Tucker was released not long after and Otis was just stuck in another tag team. He went from one of the most over men in the company to just another guy.

Too Cool were one of the most popular acts during the WWF Attitude Era. They came to ring dancing around and just being a trio of fun guys. Scotty 2 Hotty, Grand Master Sexay and the more normally named Rikishi comprised Too Cool, and were a huge part of WWE programming. Scotty 2 Hotty’s finisher, the worm, may have been the most popular finisher in wrestling at the time.

The trio split when Rikishi turned heel, attempting a monster heel run that didn’t go as WWE hoped. He hit Steve Austin with a car (for da Rock) and fell off the Hell in a Cell into a truck full of hay for some reason, but his run as a heel is seldom remembered. Scotty 2 Hotty was written off with a broken ankle soon after, and the trio never reached the heights alone as they did with each other.

Rikishi famously didn’t bother mentioning Scotty and Sexay in his hall of fame speech, a spit in the face for the men that helped get him over and made him a household name. This is one of the worst WWE Tag team break ups because this tag team was one of the most over in the company, and would never be even close to

Despite being one of the most over acts in the company, Vince McMahon just didn’t “get” Rusev Day. He refused to push the Bulgarian star and in fact punished him for “getting over” without consent.

Aiden English was Rusev’s personal announcer, who would sing the Bulgarian brute to the ring. The pair began competing as a tag team, getting the loudest cheers on the show every night. That was until Aiden English decided to attack Rusev for no reason on one random Smackdown Live episode.

The team of Enzo and Big Cass are the single biggest wasted tag team in WWE history. Enzo Amore was one of the best on the mic in WWE history and I will die on that hill. Big Cass was also very tall. These two attributes made these the perfect team. Enzo Amore started the matches, getting beat up the whole time. Then he’d tag in Big Cass who’d clean house then throw Enzo onto them for the win.

It was the perfect system, until Vince McMahon took a good look at Big Cass one day thought “Wait he’s actually tall, he’s a star!. He decided to break the pair up, having Cass attack Enzo backstage and then turn on him in the ring.

The feud, designed to make Big Cass a monster heel, made Enzo Amore the biggest face in the company. His “Tupac” promo is still one of the best in WWE history, but the matches that followed were lacklustre. Cass even tore his ACL in their final encounter, meaning little Enzo turned out to be the winner of the fued. Cass never really amounted to anything, and less than two years later both men were released from the company.

Enzo Amore and Big Cass are the biggest missed opportunity in WWE. In my view, they are the best tag team in WWE and NXT to never win the tag team championships.

Since 2019, AEW has established itself as the premier wrestling company in the United States. As we are constantly reminded, WWE is not a wrestling […]

END_OF_DOCUMENT_TOKEN_TO_BE_REPLACED

The AEW Casino ladder match is AEW's take on the ladder match/Royal Rumble concept. It is similar in concept to the Casino Battle royal. It […]

END_OF_DOCUMENT_TOKEN_TO_BE_REPLACED

Christian Cage shocked fans everywhere when he defeated Kenny Omega on the first episode of AEW Rampage. In doing so, he became the TNA & […]