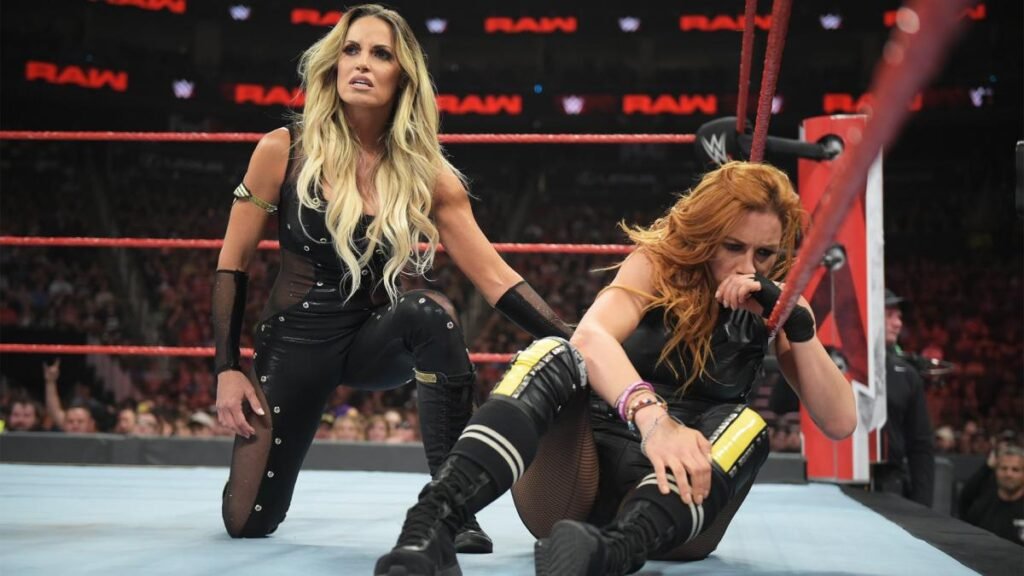 Trish Stratus vs Becky Lynch is a dream match for wrestling fans over the last twenty years. Stratus was an icon in WWE, blazing the trail for women’s wrestling from the Attitude Era all the way into her Hall of Fame induction in 2013.

Meanwhile, Becky Lynch took the baton from Trish Stratus and ran with it at lengths nobody ever had before. Becky Lynch became the most popular wrestle in the WWE and was part of the first ever women’s match to main event Wrestlemania, which she did so in 2018.

Both women are legendary wrestlers in the WWE. Trish Stratus and Becky Lynch have 13 world championships between them and there could still be more on the horizon, with Lynch still 0ne of the top stars in all the WWE.

A Becky Lynch vs Trish Stratus has seemed possible in recent years, with Stratus making returns in the Royal Rumble match and at the all-woman WWE pay per view Evolution.

However, the pair have never crossed paths inside the ring, although Lynch did defeated Stratus’ long time friend and rival Lita at the recent WWE Elimination Chamber show in 2022.

Will we finally get to see Trish Stratus vs Becky Lynch in WWE?

Trish Stratus herself has confirmed that she wants a match against “The Man” Becky Lynch. The 7 time world champion has teased a feud with Lynch multiple times on social media, but nothing concrete has ever happened inside a WWE ring.

The pair did recently have a physical altercation at a WWE event in Stratus’ home town of Toronto in Canada, but as of now that is not planned to lead to a match between Becky Lynch and Trish Stratus.

However, in a recent interview with VIBE 105.5FM radio show, Trish Stratus revealed that she is ready for a match vs Becky Lynch and that she is “always here waiting in the wings and watching” for a chance to take on Becky Lynch in a blockbuster WWE match.

“I was hosting the events in Kitchener and Toronto. Becky Lynch was being a little bit of a brat. So it came down to a little slap from Trish Stratus to put her in her place.”

“Will it result in anything else? I don’t know,  I still get asked about the Sasha Banks–Trish Stratus moment from the Rumble from 2018. That hasn’t come to fruition so far. At this point, I’ve just been focused on the show [Canada’s Got Talent] and I don’t know.”

I saw Asuka has returned to WWE television so I’m going to be patiently watching that feud unfold. Becky in the meantime has hit rock bottom, lost her stuff, she lost her Women’s championship.”

“I’m always here waiting in the wings and watching. Maybe or maybe not, that’s what I’ll say to you guys. People were pretty interested. It was kind of fun though.”

You can click here to listen to the full interview with WWE Hall of Famer Trish Stratus.

It is unknown if WWE will book Trish Stratus vs Becky Lynch in a match. Becky Lynch is currently feuding with the returning Asuka, so she would have to finish up against the Japanese star before moving onto the Canadian legend.

Becky Lynch vs Trish Stratus is a huge match that would likely be saved for a big WWE stadium show. Summerslam 2022 or Clash at the Castle could be venues for the pair to face off, but as of right now nothing has been announced.

Who would win in a fight between Becky Lynch and Trish Stratus? Let us know in the comments or click below to read more