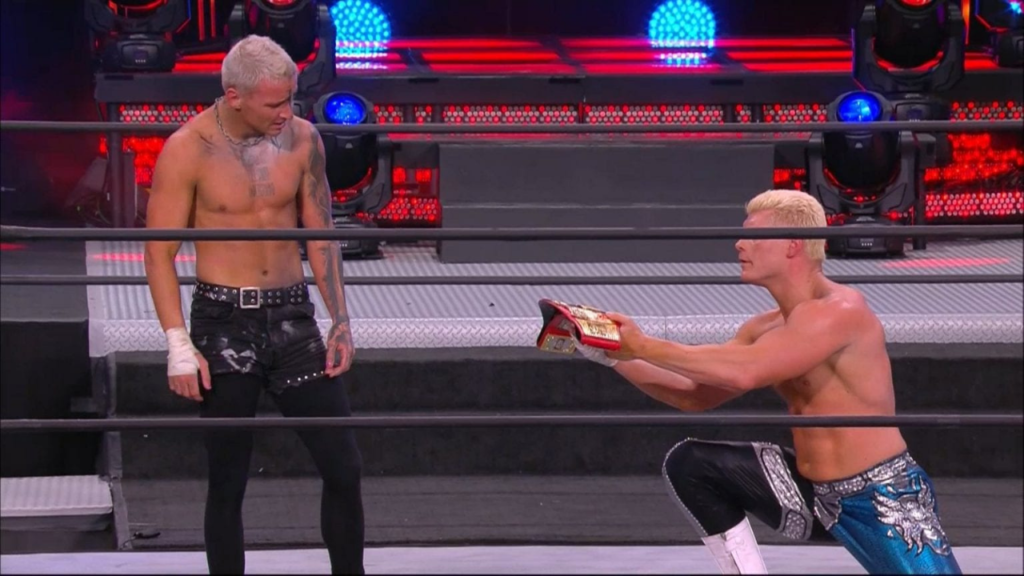 Darby Allin and Cody Rhodes had many memorable moments together in their AEW career. The pair battled multiple times in AEW, including at one of the first AEW shows Fyter Fest 2019.

The first match of theirs ended in a time-limit draw, but the rematch years later ended in Darby Allin beating Cody Rhodes for the TNT Championship.

Their time in AEW was not just limited to their rivalry, however. The pair also joined forces on occasions to battle some top heel teams like Team Taz, and were teammates during the iconic debut of Sting in AEW.

While Darby Allin and Cody Rhodes AEW career’s seemed intertwined, their paths have veered of significantly since this years Wrestlemania. At the event, Cody Rhodes made his WWE debut, and Darby Allin had some interesting things to say about Cody Rhodes WWE return…

While Cody Rhodes seems happy in his role after his WWE return, Darby Allin revealed that he could never see himself following in the American Nightmare’s footsteps.

In a recent interview with the New York Post, Darby Allin revealed that he “wouldn’t be happy” leaving AEW for the WWE (as Cody Rhodes has done), but reiterated that “if he finds that happiness, that’s all that’s important”

“I’m just happy if he’s happy. That’s all it comes down to. [There are] different roads everyone can take on this journey in professional wrestling.”

“I know I wouldn’t be happy doing anything outside of AEW because of all the free time, all the skating that I get to do, and all my side projects, and the craziness. I can’t be tied down to following a schedule that much.”

“But if he finds that happiness, that’s all that’s important. That’s all that really matters to me. It’s nobody’s business but his own.”

Despite him not seeing eye to eye with Cody Rhodes on leaving AEW for WWE, Darby Allin had glowing words about the son of Dusty Rhodes, and how he helped Darby Allin at the start of his AEW career when he really had no need to.

“He saw the passion that I had to be in AEW in the beginning, and that’s why he chose me to wrestle him at Fyter Fest (in 2019)”

“That was my debut. We went to a 20-minute broadway. To kind of take a relative unknown and work a wrestler like myself at the time and do that, is very special.”

Darby Allin has become of the biggest stars in AEW, partially thanks to the help he got from Cody Rhodes early in his career.

Meanwhile, Cody Rhodes is one of the top stars in WWE and is rumoured to be beating Roman Reigns for the WWE Championship some time in the near future.

What do you think of what Darby Allin said about Cody Rhodes? Let us know in the comments or click below to read more