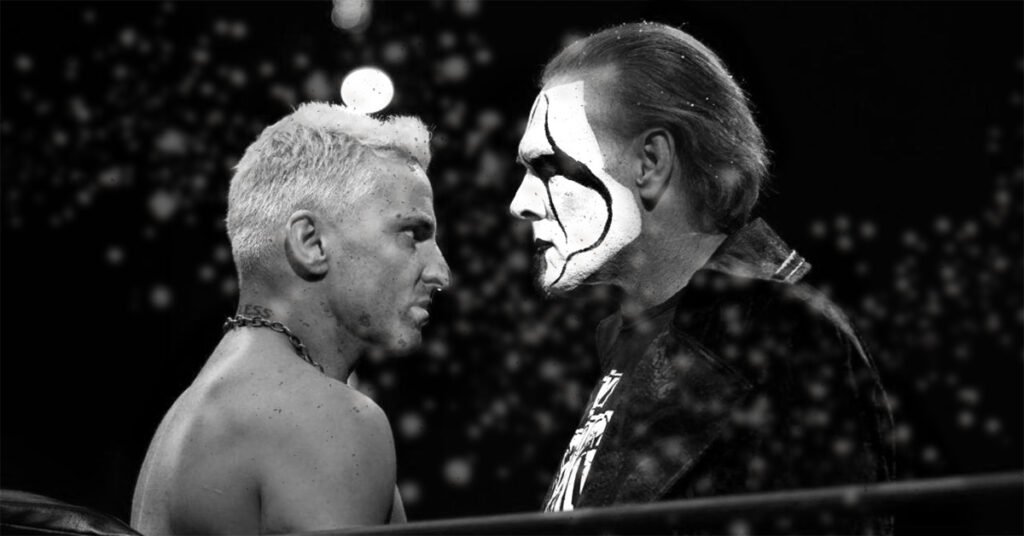 Since his debut in AEW at Winter is Coming, Sting has been inseparable from Darby Allin. They bonded over their love for face paint and “being hoodlums”, and have been one of the best pairings in AEW. However, I think that, when all is said and done, Darby Allin vs Sting will be the Icon’s last match. Darby Allin will retire Sting.

And everyone will be okay with that.

The pairing of Sting and Darby Allin is one that doesn’t seem to make sense, but actually does.

Both wear black and white face paint, but that’s quite a tenuous link to build and keep a relationship on. But as the relationship grew, it showed that they weren’t both so different.

They are both loners. Darby Allin from years of being an outcast, rejected by society, forced into seclusion by the way in which society categorises people.

Sting, by years of betrayal. Watching time after time as his friends turned his back on him when he needed them most. Whether it was Lex Luger, Macho Man, or even WCW as a whole, he was almost stabbed in the back when he least expected it.

So he began expecting it, never letting his guard down. Until he met a fellow hoodlum like Darby Allin.

Sting debuted at Winter is Coming 2020, saving a number of wrestlers which included Darby Allin from a Team Taz beatdown.

What followed was the longest, most samey feud in AEW until Orange Cassidy vs Matt Hardy would usurp it.

Each week, Sting would come out for an interview with Tony Schiavone. Before he got a chance to speak, however, some combination of Team Taz would interrupt him. Naturally, there would be a brawl involving Sting, Darby Allin and Team Taz. Repeat until nobody cares at all.

Eventually, Ricky Starks and Brian Cage faced Sting and Darby Allin in a pre-taped match at AEW Revolution 2021. Sting won the match for his team by pinning Ricky Starks, and the team remain undefeated to this day.

They would rack up wins against a number of teams. Sting and Darby Allin defeated 2.0, Men of the Year and FTR to extend their winning streak together to four. Sting has performed excellently in these matches, and has silenced all critics.

It would be untruthful to not state that Sting is on his last legs.

That’s not a knock on the man. He his 62, and has been wrestling longer than almost the entire AEW roster has been alive. He clearly only has a limited number of matches left, especially given the fact that he already had to retire from injuries once, in WWE.

His last matches need to help build a new star in AEW. Someone who can be the franchise of AEW as Sting was for WCW.

That man is Darby Allin, and Darby Allin vs Sting should be the Icon’s final match.

Darby Allin vs Sting needs to be Sting’s last match. He will pass the torch to his protege, and ensure the future of wrestling is safe in the hands of Darby Allin.

We don’t need to turn either men heel, or face. Shawn Michaels didn’t need to change his character to retire Ric Flair. This is the same thing.

Allin will put Sting out hi misery. He’ll lay him out with a Coffin Drop, then lock in the Scorpion Death Lock to make the Stinger tap out to his own move, for the final time.

Sting can ride off into the sunset. Or, he can stay managing Allin, although this match would show that Allin has outgrown the need for Sting. Sting can even be the first inductee into the AEW Hall of Fame.

Whatever happens to Sting, one thing is certain:

Darby Allin will be a star, and the new Franchise of AEW.

Check out our list of the best returns in WWE history