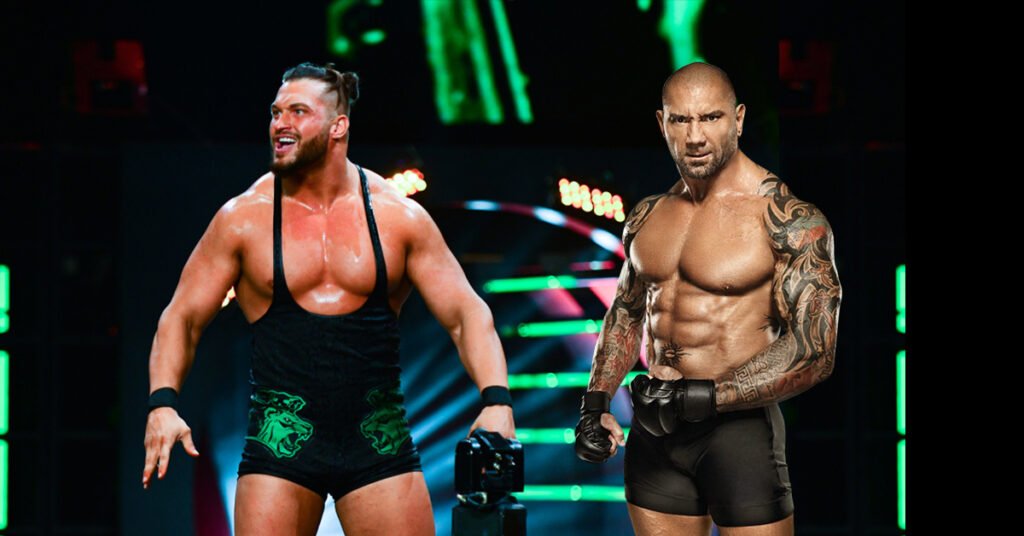 Wardlow and Batista have drawn comparisons in recent months, as Wardlow’s storyline as MJF’s hired goon draws similarities to Batista’s eventual turn on Triple H in 2005.

Both men were booked similarly very early in their careers, with both men being the silent enforcer in their respective wrestling factions (Wardlow in The Pinnacle and Batista in Evolution). Batista eventually turned on Triple H in one of the most memorable WWE moments ever, after the 2005 Royal Rumble, whilst Wardlow finally broke free of MJF’s grasps at AEW Revolution 2022.

Wardlow’s ascent from the silent, big man-type character drew comparisons to Batista and fans have been clamouring for him to turn on MJF for months, due to MJF’s mistreatment. He is poised to become a made-man overnight when he finally takes on MJF, evocative of Batista finally dethroning Triple H at Wrestlemania 21.

Wardlow has not turned a blind eye to these comparisons. He has stated many times in interviews that his favourite wrestler as a child, alongside new AEW star Jeff Hardy, was The Animal Batista himself. He favoured comparisons to the former World Heavyweight Champion, as he claimed he tried to get as big as Batista was when he was training in high school.

Wardlow also said that he would “Love to meet” Batista, who is rumoured to be inducted in the WWE Hall of Fame next year, and that he is still somebody that “motivates” Wardlow to this day.

In a recent interview with Bleav in Pro Wrestling, Wardlow commented on the comparisons between himself and Batista and how he would love to meet Batista one day in the near future.

“To go on Twitter and, you know, see side-by-side pictures and comparisons, and people comparing me to him is, it’s just such a cool feeling.” He said about the Wardlow-Batista comparisons.

“Dave is somebody who I haven’t met and would love to meet him to thank him, because he’s still somebody to this day that motivates me, you know? He’s still doing big things in life and he still motivates me and pushes me to this day without him knowing it.”

“But yeah man, just life and manifestation, you look at Batista, he started as Deacon Batista wearing that same suit, silent. I started with the suit. Silent. Then he turned into Evolution. I had been in the Pinnacle. Him and Triple H, me and Max. These things, that’s just crazy. You can’t write this stuff. It’s crazy how life has been working out.” Source

Batista has been in the headlines as the Batista vs The Rock feuds heats up, although the Animal has said he will never wrestle again and he will stay retire. So, the dream match of Wardlow vs Batista will never happen, but Wardlow is still thrilled with the comparisons of Wardlow and Batista.

Hopefully Wardlow can become as big a star in AEW as Batista was in WWE.

What do you think about the comparisons between Wardlow and Batista? Would you like to see Batista take on Wardlow WWE match? Let us know in the comments or click below to keep reading.