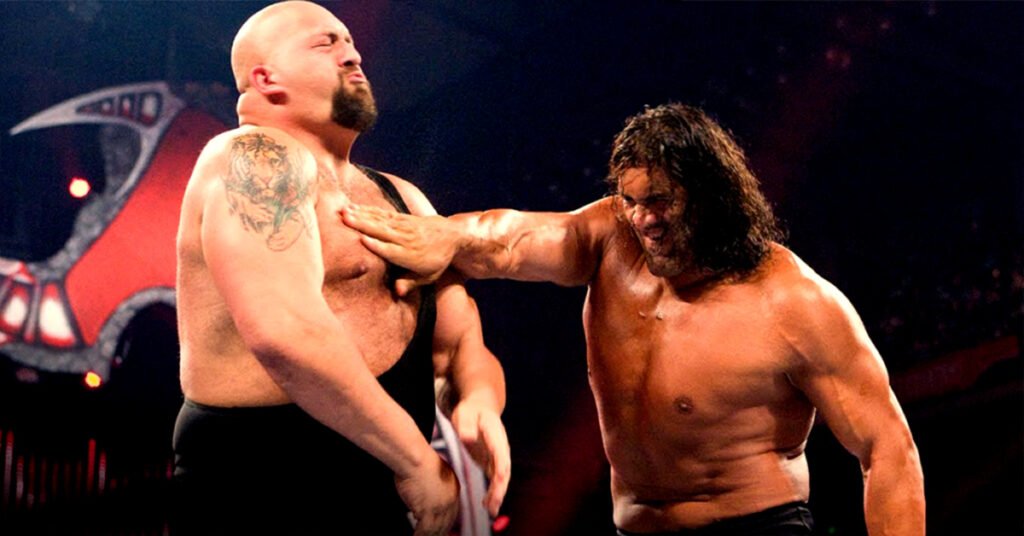 WWE has always been known as the “land of the giants”. The likes of Hulk Hogan, Kane and Andre the Giant have towered over their competition since the company began. However, those three don’t even touch the sides of the tallest wrestlers in WWE history.

Even 7 footers like Big Show and Kane don’t get on the list of top 5 tallest wrestlers. WWE has hired some absolute giants in the past (and present) to wrestle for them, with varying degrees of success.

Here are the top 5 tallest wrestlers in the history

WWE Tallest Wrestlers of all time

The Punjabi Nightmare is 5th on this list of tallest wrestlers in WWE history. The former bodybuilder came into WWE in 2006, immediately starting a feud with The Undertaker. While his limited ability in ring, and his limited mobility due to constant knee issues, The Great Khali would become a World Heavyweight Champion, the first WWE world champion to come from Asia (WWE do not recognise the Antonio Inoki WWE Championship reign).

The Great Khali was a huge and terrifying sight to behold. Stand at 7 feet and 1 inches, he was the fifth tallest wrestler to ever step foot in a WWE ring. He towered over opponents, and made wrestlers like Rey Mysterio look like literal children.

His career lasted almost 10 years in the WWE, before he was released in 2014. Since then, he has been inducted into the WWE hall of fame. He even returned at Battleground 2016, helping fellow Indian Jinder Mahal retain his WWE Championship, in a match type of Khali’s creation – The Punjabi Prison match.

The Brazilian giant did not make a huge impact in WWE, despite standing at 7 feet 2 inches. Before getting into pro-wrestling, Silva competed in Basketball for the Brazil national team. He competed at the 1998 Olympics, but failed to win a medal with his country.

In WWE, his size and stature made him struggle to perform in the ring. To help combat this, WWE teamed him with The Oddities. He never impressed in his run, his highlight winning a pre-show match at Summerslam 1998. He was released in February 1999, less than two years after signing with the WWE.

Giant Silva would actually team with the Great Khali in NJPW, prior to Khali signing with WWE. I cannot think of a more terrifying team to come up against!

The third tallest man in WWE history is actually an active star on the WWE’s roster. He stands at 7 feet and 3 inches, and like Giant Silva was a basketball player by trade at first.

However, his true future lay in professional wrestling. Omos skipped NXT TV, instead making his debut as part of the ill-fated Raw Underground. He would later re-debut as the giant Omos, and align himself with AJ Styles.

He would provide muscle to back up the yapping terrier that is AJ Styles. The pair would go on to win the WWE Tag Team titles, holding them for 138 days until losing to RK-Bro.

Omos looks to have a bright future ahead of him, and the sky is the limit for this giant of the new generations.

Trapper John is almost certainly a name you haven’t heard of.

And I don’t blame you. I certainly hadn’t. He was more well known under the ring name Silo Sam.

He was signed to the AWA in the 1980s, as a response to the rising popularity of Andre the Giant in WWE. Not to be outdone, Vince McMahon made an offer to the giant, who was billed at 7 feet 8 but actually measured in at 7 feet 4 inches. He made one non-televised appearance for WWE, but his in ring skills were so bad, Vince paid him to stay at home.

Trapper John would continue professional wrestling until 1990, when he would retire. He found success in acting, even having a part in movies like Pee-Wees big adventure.

Despite being bigger than Andre the Giant, he didn’t have the ability that the French Giant had.

Despite being billed at over 8 foot tall, the Giant Gonzales only stood at 7 feet 7.

Yes, WWE had a legit giant in their midst and still felt the need to embellish his height. He was actually nearly 8 foot tall, a ridiculous height which made even the Undertaker look small.

Apart from his height, Giant Gonzales was terrible in the ring. This could have been due to his height, as it limited his mobility. This was really noticeable when he faced Undertaker at Wrestlemania, in one of the worst matches in Wrestlemania history.