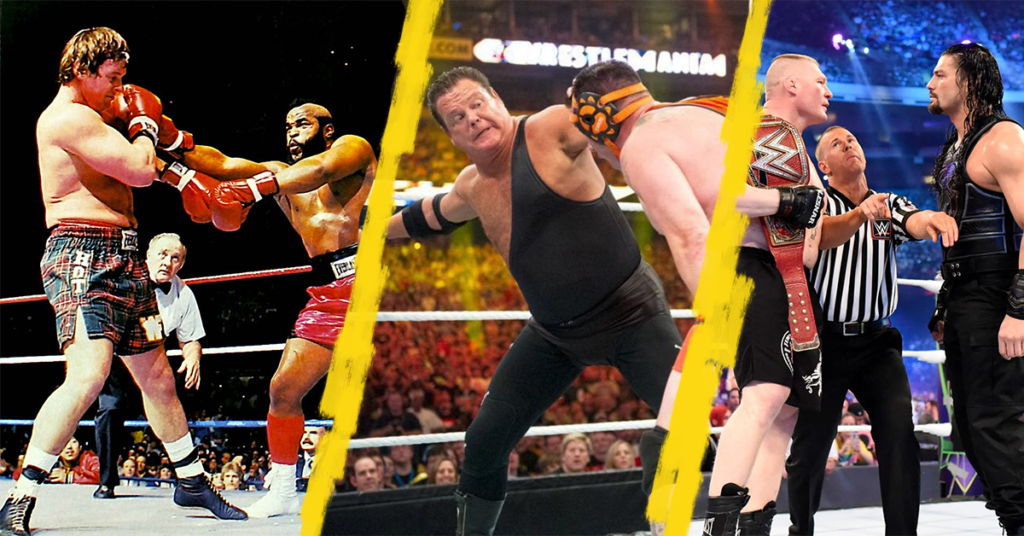 Classics like Bret Hart vs Steve Austin and Undertaker vs CM Punk have taken place at Wrestlemania, but have been joined by the likes of Orton v Triple H and Lesnar vs Goldberg in 2004. There have been some real stinkers in Wrestlemania’s gone by, and some that are just horrible to watch.

Some matches not on this list include Terry vs The Kat at Wrestlemania 2000. While that match is horrible, it is inconsequential. You can not watch that match, and miss 10 minutes of the show and nothing changes. However, the matches on this list were a big part of the show, and these men’s careers.

In this article, I’ll guide you through the worst Wrestlemania matches in WWE history.

I’ll give you comprehensive guide of what matches that you have to absolutely avoid, please please avoid these matches. Some of these are the absolute epitome of when wrestling goes wrong.

The first match on the list of worst Wrestlemania matches is a bout between two Hall of Famers.

2014 inductee The Ultimate Warrior was back at WWE for the first time in 4 years when he rocked up to Wrestlemania 12 in his horrible, horrible jacket.

His floor length, sleeveless coat which was a sore on the eyes of all who saw it was the least of the issues with this match. In just under two minutes, The Ultimate Warrior defeated the young Hunter Hearst Helmsley, then a budding young star in the WWF.

He kicked out of Helmsley’s finisher, the Pedigree, which at the time was hugely protected and rarely kicked out of. It took less than two minutes for Warrior to dispatch Helmsley. The match was pointless, and Warrior crushed the future star Triple H, but didn’t use the win to move forward at all.

Warrior would not go on to do much else in WWE after this match. He faced Goldust for the Interconinental Championship soon after, and lost via count out.

He left the company in July that year, and would not return until his hall of fame induction in 2014. It was a waste of beating a young star, and no-selling his protected finisher for apparently no reason.

Warrior passed away 2 days after going into the hall of fame, on the 8th of April 2014.

The match bored fans in attendance and around the world. The two men just did the same thing over and over again.

It was like they’d entered a time loop and spent 20 minutes just doing the same punches, which were not boxing punches at all.

The match ended by disqualification to add insult to injury. Piper got angry and hit Mr T with a bodyslam, costing himself the match.

It was a pitiful end to an awful match and a feud that would last beyond Wrestlemania.

3. The Undertaker vs Giant Gonzalez

The Undertaker’s Wrestlemania streak has produced some the greatest matches in WWE history.

His bouts with CM Punk and Shawn Michaels rank up there with the best matches of all time.

Unfortunately, his match with the terrible Giant Gonzalez ranks as one of the worst matches in the history of WWE itself.

The match plodded along at Glaciel speed, with the almost seven foot Undertaker playing underdog to the 8 foot-billed Giant Gonzalez. Giant Gonzalez is the tallest WWE wrestler ever, but that didn’t stop him being really, really terrible.

Undertaker picked up the win, albeit by disqualification. A sorry end to an awful match that even The Undertaker described as “so bad on so many levels“.

It is by far the worst of the Undertaker’s Wrestlemania matches and one to avoid at all cost.

This match may be the most poorly booked attempt at an epic main event that you’ll ever see.

Roman Reigns was going into the match as the WWE’s golden boy. He was the face of the company, the main star of every show and the man to carry the brand on his back.

Too bad everybody was sick and tired of his shit and wanted him to turn heel or fuck off. He did neither. He faced Brock Lesnar, who had held the WWE Title for over a year at this point.

Fans were also sick of this title reign, and wanted a proper champion who would be at every show and defend his title regularly. It seemed like a perfect storm of fans not wanting either men in the match.

It also didn’t help that the match took place after the crowd had sat through about 12 hours of Wrestlemania matches already.

And the match was as forgettable as it was ridiculous. The fans chanted for any random shit they wanted, as long as it wasn’t to do with the match.

They chucked beachballs around the arena and paid no attention to the men in the ring.

Then Roman Reigns kicked out of five F-5’s. FIVE. WWE had built up the F5 as a finisher that takes only one to finish you off.

The likes of Samoa Joe and Braun Strowman had been beaten by one, and Roman took FIVE and kicked out.

Even more hilariously, he got hit by a sixth and lost.

It was the most poorly booked main event I’ve ever seen and would be the worst Wrestlemania match, if not for the next entry.

I don’t think there is any way any match will ever beat this one.

Jerry Lawler, the King of Memphis who was now looking at getting his free bus pass, took on fellow commentator Michael Cole.

Cole was not a wrestler, had never wrestled before and was on the worst run of his life.

He had turned heel and became the most insufferable person on television. Cole wasn’t “a good heel”, he was simply so irritating that you wanted to turn off the TV. The match itself went 14 minutes, but you’d be forgiven for thinking it was closer to the 30 minute mark.

The plodding, boring match couldn’t even be saved by WWE Legend “Stone Cold” Steve Austin. The Texas Rattlesnake counted the win for Lawler in his role as Special Guest Referee, before hitting Michael Cole with a well earned stunner.

Luckily for no-one, the awful Anonymous Raw General Manager overturned the result and handed it to Cole.

So nothing we saw mattered and Cole and the awful Raw GM (which turned out to be Hornswoggle) triumphed by default. That is definitely the worst match in Wrestlemania history. The match was awful and the result didn’t even matter in the end.

Want to read more? Check out When Wrestling Goes Wrong, the most dangerous mistakes ever made in WWE history