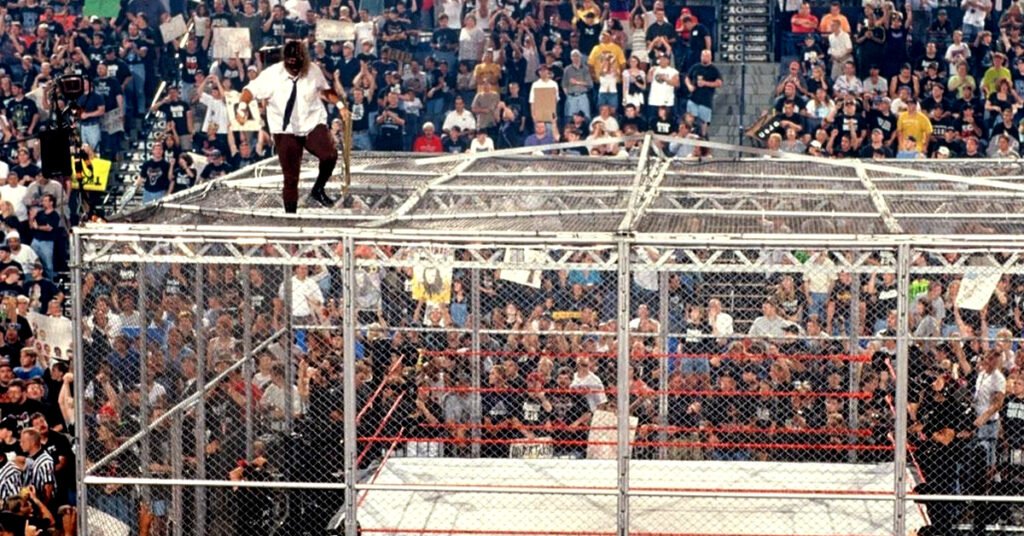 With the nature of wrestling, it’s hard to know what’s real and what’s not. Because the whole history of wrestling is steeped in lies and deception, discerning the lies from the truth can be difficult. However, when wrestling goes wrong, sometimes it can be easy to know what’s true or not.

Whether it be a real life injury, or a wrestling deciding he wants to fight for real, anything can go wrong in wrestling. Dangerous makes can happen in the WWE, and injuries and even death can be the ultimate end.

Mankind almost dies in Hell in a Cell

One of the most famous matches in WWE is the Hell in a Cell match between Mankind and the Undertaker. However, that is for all the wrong reasons. It is one of the few matches when the fans – and the wrestlers – thought they’d watched a man die live on pay-per-view. And if that isn’t when wrestling goes wrong then I don’t know what it.

In the second ever Hell in a Cell match, Mick Foley decided he needed to make it the most memorable. He started by climbing up the cage. Up there he was met by The Undertaker, who after some wrestling, threw him off the cage through the announce table, twenty feet below.

However, this was not when wrestling went wrong.

After crashing through the table, Mankind was wheeled out a stretcher. However, he ran back, meeting Undertaker back on top of the cell. He was greeted with a chokeslam onto the cage. While it was meant to be a normal chokeslam, it actually broke through the links of the cage. Mankind went plummeting to the ground, unprepared for the fall.

He fell hard into the ring. Somehow he survived, managing not to over-rotate land on his neck. Unfortunately, he did lose a few teeth, as they were pushed through his mouth and into his nose. Somehow he finished the match, and even ran in to be part of the main event later that night.

Daniel Puder was a contestant on the fourth series of the WWE reality show Tough Enough. Tough Enough took WWE fans who wanted to become wrestlers, and put them through a number of challenges. The winner would win a $1 million contract with WWE, and hopefully became a star in the company.

This became important on the November 4th 2004 episode of Smackdown. The Tough Enough contestants, which included future Intercontinental Champion Ryback, were forced into a shoot fight with Kurt Angle. The rules were implied to be that of an amateur wrestling match, designed to humiliate the contestants. However, Puder never got that message.

After seeing a fellow contestant being humiliated by Angle, Puder stepped up. Puder took Kurt Angle down, locking in the Kimura lock. This was not just one of Brock Lesnar’s signature moves – when applied correctly, it can break the arm of the recipient. Knowing Angle would rather break an arm than concede defeat, the referees counted a pin fall on Puder, giving a “victory” to Angle.

Puder would, unfairly, be punished during the next Royal Rumble. Shockingly, he would be thrown around and viciously chopped by the likes of Hardcore Holly, and would not become a star in WWE. Sadly, Puder is now out of the wrestling business entirely, which is a good thing for Kurt Angle.

Summerslam 1997 had a number of huge matches on the card. Bret Hart beat the Undertaker for the WWE Championship, but his brother Owen Hart who stole the headlines. This was due to his botch, which makes our list of “when wrestling goes wrong”. It was one of the most dangerous botches in WWE history.

Owen Hart attempted a piledriver on Austin toward the end of the match. However, he held Austin in position for a Tombstone Piledriver, but executed it like a regular piledriver. He drove Austin’s head into the mat, in the process holding it between his legs. His neck snapped, and immediately was paralyzed.

Austin could not move his limbs, but soon regained some mobility. Knowing he was meant to win the match, he attempted a roll up on Owen, pinning him for the win.

Austin held a grudge with Hart for years, owing to the fact that Owen Hart never apologised for the dangerous botch on Austin. They never buried the hatchet before Owen Hart died in 1999.

Droz is paralyzed in the ring

On October 5th 1999, wrestler Droz wrestled D-Lo Brown at a WWE Smackdown taping. The matches footage has been locked away in the WWE fault, never to be seen by anybody. However, it was one of the biggest examples of when wrestling goes wrong, and it cost Droz his mobility.

As reports go, D-Lo Brown attempted to powerbomb Droz and slam him to the mat.. However, due to the loose fitting shirt Droz was wearing, D-Lo could not get a good grip on the wrestler. He dropped him on his head and Droz was immediately paralyzed from the neck down, losing all movement in his arms and legs.

It is one of the most horrific injuries in WWE history. Thankfully he footage of paramedics attending to Droz has been used by the WWE in it’s safety videos, warning children “Don’t try this at home”.

Droz has said he holds no animosity towards D-Lo Brown, accepting that it was simply an accident. However, it was one of the most dangerous botches in WWE history and one never to be seen again.

Owen Hart’s death at Over the Limit 1999

The death of Owen Hart is one of the most tragic moments in wrestling history. It is also a prime example of when wrestling goes wrong.

Hart was working as his “Blue Blazer” gimmick, a superhero type character. With his character, he was to ascend from the rafters of the arena. His entrance was supposed to be similar to Shawn Michaels at Wrestlemania XII.

However, at Over the Limit 1999, Owen Hart fell from his harness. He landed on the turnbuckle, and died soon after in the ring. The harness he was meant to use was unfit to use, and was not designed to hold the weight of a human being. In addition, there were no safety precautions in place, and once it failed there was no way to prevent Hart from plummeting to his death.

Owen’s wife, Dr Martha Hart, sued the WWE, settling out of court. She has since signed a deal AEW, to honour the legacy of Owen Hart. Hart will also make his first video game appearance in nearly two decades in the upcoming AEW Video Game.