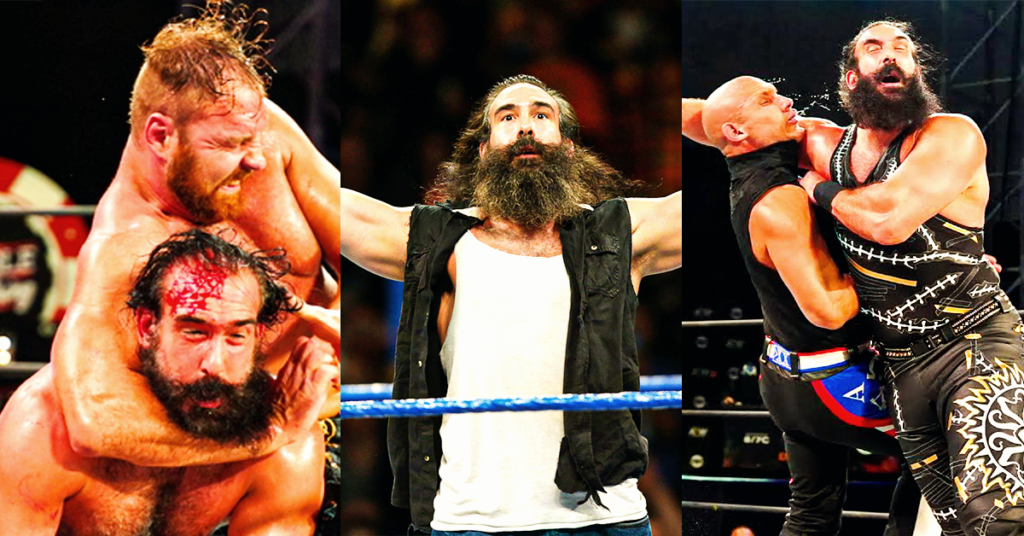 On 26th December 2020, John Huber AKA Brodie Lee passed away. His death was widely mourned by fans and colleagues alike. The whole his passing left in AEW is one that is impossible to fill. His stable, the Dark Order, have honoured him memory and done in proud in the months following his passing. Brodie Lee had some of the best matches in any company he was in, and his co-workers have honoured him the best way they can.

So to remember him the best way we can, I will be going through Brodie Lee best matches of all time. A big man who could fly through the air, work as a brawler, he could work great matches with anybody. Even Erick Rowan. He could play the monster perfectly, and also the sympathetic babyface. In his feud with Bray Wyatt and Randy Orton, they should have given Brodie Lee the WWE Championship.

The opening match on the list of Brodie Lee best matches is one from before his time in WWE.

Brodie Lee was an undefeated monster running roughshod over Chikara. He and Claudio Castagnoli (Now WWE’s Antonio Cesaro) were embroiled in a long time blood feud. It could only end one way – inside the Steel Cage.

This one of the steel cage matches you can watch again and again. The use of the cage is excellent, and is without the boring tropes that spoil every WWE cage match. Both men work together in harmony to give a hard hitting and real performance.

It’s one cage match you can watch again and again and still enjoy it. I recommend watching the match in full, as I have linked it below.

This TNT title rematch is one of the best Dog Collar matches I’ve ever seen. Albeit a small sample size, this one showcases the monster in Brodie Lee and hero in Cody Rhodes.

The pair were feuding over the TNT Title, which Brodie Lee beat Cody Rhodes for. The former Luke Harper took mere minutes to destroy Cody and take his coveted championship.

The title rematch (with Cody’s awful black hair” took place on AEW Dynamite. It was a match for the ages, a bloody yet psychological war that featured broken tables and brutal chair shots.

Cody Rhodes won the encounter to become the first and only two time TNT Champion. This would be Brodie Lee’s last ever match before his untimely death. Any wrestler worth his salt would be honoured to have wrestled such an intense match as Brodie did, just under three months prior to his death.

The first of two outstanding matches between the two legendary factions. The Wyatt Family were led by Bray Wyatt, the cult leader who had in his grasps the services of Luke Harper and Erick Rowan. They faced off against the Shield, one of the greatest WWE factions of all time. Dean Ambrose, Roman Reigns and Seth Rollins were three up and comers who thanks to their brotherhood, became world champions and stand at the top of their industry.

The match was a classic, with some stellar in ring action descending into brawls all around the arena, and hard hitting action. It was one of the last feuds the Shield had before their break up, and the match is definitely up there with one of their greatest of all time.

The two teams would later face off on an episode of WWE Main Event, weirdly. A great trios match but it never matched the excitement of this first encounter.

Despite coming after the disappearance of Bray Wyatt after he was ruined by John Cena, this match was the best on the whole show. The Uso’s defended their Tag Team Championships against the team of Luke Harper and Erick Rowan, in a two out of three falls match.

This match showed the Uso’s really coming into their prime as babyfaces. They were exciting, fast paced and played the crowd well, with great looking offence. The Wyatt’s however, playing their role as the monsters of the match perfectly, with Brodie Lee (Luke Harper) particuarly looking like a star.

The Uso’s took home the win in the end, but I always thought that it was finally time to give the Wyatt Family the tag team belts. This was the best of the tag team matches Brodie Lee had in WWE, and is only best, in my opinion, but the match against the Shield.

Both these teams were some of the best WWE wrestlers and the match they had showcased their talent as it never had before.

This AEW Championship bout had the fans around the world believing that the Dark Order were about to be on top. Brodie Lee seemed unstoppable, and not even AEW’s anti-hero Jon Moxley could stop him.

In a brutal affair filled with hard hitting, brawling styles and Moxley working as the underdog, it took a Paradigm Shift through the stage and in the ring. Brodie passed out due to pain and did not get pinned, showing Moxley’s grit and determination was what won the day and the AEW World Heavyweight Championship.

It was one of the best matches in Jon Moxley’s reign as AEW Champion. I’d place it just behind his match with MJF as his best title defence on pay-per-view.

The final match of “Brodie Lee best matches” was during his only singles title run in WWE. Whilst I believe he deserved a WWE title run during his feud with Bray Wyatt and Randy Orton, he only tasted singles gold when he defeated Dolph Ziggler after that famous Survivor Series match in 2014.

The pair faced off at TLC in the opening contest, a ladder match for Harper’s Intercontinental Championship. The pair found extremely innovated uses of the ladders, and Harper bounced Ziggler around the ring in brutal fashion. This was peak Ziggler, and the fans were willing him so much to win that Harper’s brutalisation only furthered his cause.

Dolph Ziggler won the match, but the pair pulled off the match of the night. It is a match still talked about 7 years later as one of the best WWE ladder matches in recent times. It is definitely on the, and maybe even topping, the list of Brodie Lee best matches of all time.