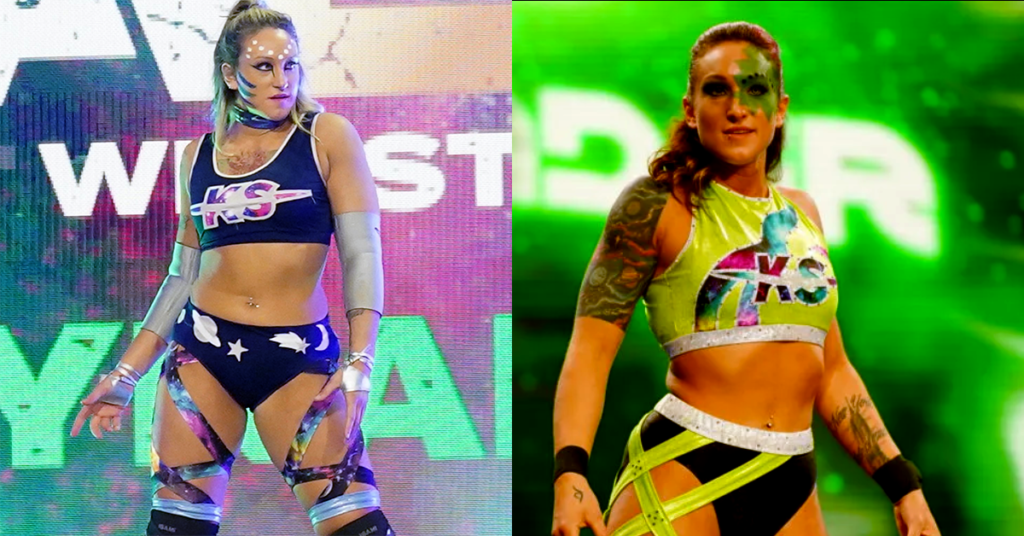 In the third match in an exceptional show at AEW All Out, the women’s championship was defended. The alien Kris Statlander ate a loss to the AEW Women’s Champion, Dr Britt Baker DMD. Despite the loss, not everything is doom and gloom for the intergalactic wrestler. She gave a great showing, pushing the champion to the limit and coming so close to her first women’s title in AEW.

Kris Statlander has had a tricky couple of years in AEW. She started out strong, debuting in November 2019 and signing full time for the promotion in December.

She soon became one of the top women in the division, defeating Britt Baker to become number one contender for the AEW Women’s championship on December 18.

However, the match against Riho, then AEW Women’s champion, was one of the most disappointing in AEW’s short history. A good match that was just getting going was interupted by the short lived Nightmare Collective.

The Nightmare Collective consisted of Brandi Rhodes, Awesome Kong, Dr Luther and some woman called Mel. Brandi Rhodes was trying her best to be a heel, but she was just too likable.

The group attacked both women, with Riho eventually getting the win. The Nightmare Collective disbanded soon after when Awesome Kong left for TV work, and AEW realised it just wasn’t working.

She went on to face Nyla Rose at AEW Revolution 2020, in a losing effort. After a handful of matches after that, she suffered an ACL injury which kept her out of action for ten months.

The injury was horrific, but only motivated Statlander to return to the ring strong and better than ever. Still green in the ring, Statlander still had a long way to go with her in ring work, although the potential was clear.

“When I first got signed, we were doing a whole lot of skits on BTE.  We were told it would never happen on TV.  This is going to stay on BTE because of personal reasons.

Not our reasons, but, it was just something that wasn’t wanted for TV” Statlander revealed.

“Then, the fact that how we made me join them and it becoming my actual return, it’s still incredibly mind blowing to me.

How often do you see a woman wrestler return in the men’s main event gimmick match to team up with them and save them?  When does that happen, ever?  It never does”.

Statlander returned from her ACL injury during the main event of AEW Dynamite. on 31 March 2021, the team of Orange Cassidy and Chuck Taylor took on Miro and Kip Sabian.

The stipulation was an “Arcade Anarchy” match, with various arcade machines and carnival games scattered around the ring. Along with Statlander, Trent was also missing from the Best Friends rank.

Kris Statlander made her AEW return during the match. She popped out of a “grabber machine” mid match, throwing the plastic covering at Penelope Ford, before brawling with the wife of Kip Sabian.

The return was a huge surprise. It hoisted her into the main event, and immediately teamed her up with the Best Friends. She has been a constant by their sides since, and has gained exposure tailing one AEW’s most popular acts, Orange Cassidy.

Her act with the Best Friends and new protegee Wheeler Yuta has provided some excellent segments on Youtube show Being the Elite.

The team have been criticising Yuta’s performances when he loses matches, including costing them matches. These skits end with Chuck Taylor and Orange Cassidy leaving the room, as Kris Statlander chokes out AEW’s newest prospect.

AEW’s biggest show to date, All Out, took place on September 5 2021, and Kris Statlander was a main feature of the show. She took part in one of two women’s matches on the card, competing for the AEW Women’s Championship.

Taking on AEW’s biggest women’s star, Dr Britt Baker DMD, Kris Statlander came across as one of the premier talents in AEW.

Her in ring ability has grown leaps and bounds since her debut. She looks a lot more confident and assured of herself in the ring.

Statlander has built up herself as the powerhouse of the division, showing some very impressive power moves that looked brutal on Britt Baker.

She was beaten in the end by the champion, but came out looking like an absolute star. She physically dominated Britt Baker and made her seem tiny in comparison.

Her large frame and immense strength is a rarity in the AEW women’s division, and in a division where diversity is one of the biggest strengths.

What next for Kris Statlander in AEW?

After her championship defeat, Kris Statlander will be out of the title picture for some time. AEW has done great with avoiding rematches so far, as noted in the article “does AEW have too many wrestlers?“.

Moving away from the title picture, I predict she will stick close with her Best Friends team mates in the near future, while she regroups and finds herself a new feud in AEW.

AEW has had an issue with booking the women’s division in recent time. While Britt Baker is one of the biggest stars in AEW, it is usually only her that has a feud going. Before she was champion, that meant two high profile women’s rivalries, but since her ascendance to champion, that has limited the AEW Women’s screen time significantly.

However, with AEW making a conscious effort to build up it’s women stars, I can see the female wrestlers becoming a much more prominent part of the show in the coming weeks.

The division looks to have a Ruby Soho/Thunder Rosa/Britt Baker feud triangle to be brewing, after Soho’s surprise debut and victory in the AEW Casino Battle Royal.

This could also turn into a feud between Nyla Rose and Thunder Rosa, as the pair clashed in the Battle Royale. Tay Conti and Penelope Ford look to be locked in a rivalry after Ford eliminated Tay’s “bestie” Anna Jay. Jade Cargill can also fight anybody, and let it fit in with her character.

Statlander doesn’t look like she’s going to immediately slot into any of these feuds. As the Best Friends vs Hardy Family Office rivalry comes to an end, a match against the Bunny looks out of reach.

She definitely has the opportunity to fight her way back up the rankings in the future, though. I look forward to seeing her take on the likes of Tay Conti, Penelope Ford and Hikaru Shida in one off match.

Kris Statlander needs to win a high profile match against a high ranking opponent, preferably a number one contenders match. The main candidates for this are Riho and Thunder Rosa.

Riho has recently returned from injury, and looks to be out of the title picture in the near future. A loss to the Intergalactic Statlander wouldn’t harm her, and her popularity would help bring more eyes on the incredibly strong Kris Statlander.

Thunder Rosa is another absolute star of the division. She should be the one to beat Britt Baker. Their rivalry so far in AEW has been one of the most intense and violent in the whole company.

Their Lights Out Match from AEW Dynamite not only main evented the show, but blew everyone away by the quality and bloodshed. Rosa is the next star of AEW, if she isn’t already. A loss to Statlander would not stop her in her goals, but build up a suitor when she does eventually win the big one.

Statlander has nothing to worry about. She is going to be a big star in AEW, and part of the next generation of women’s stars along with Jade Cargill and Tay Conti. Her Best Friends partnership has helped propel her to new heights, and she should be tasting AEW Women’s Championship gold before too long.