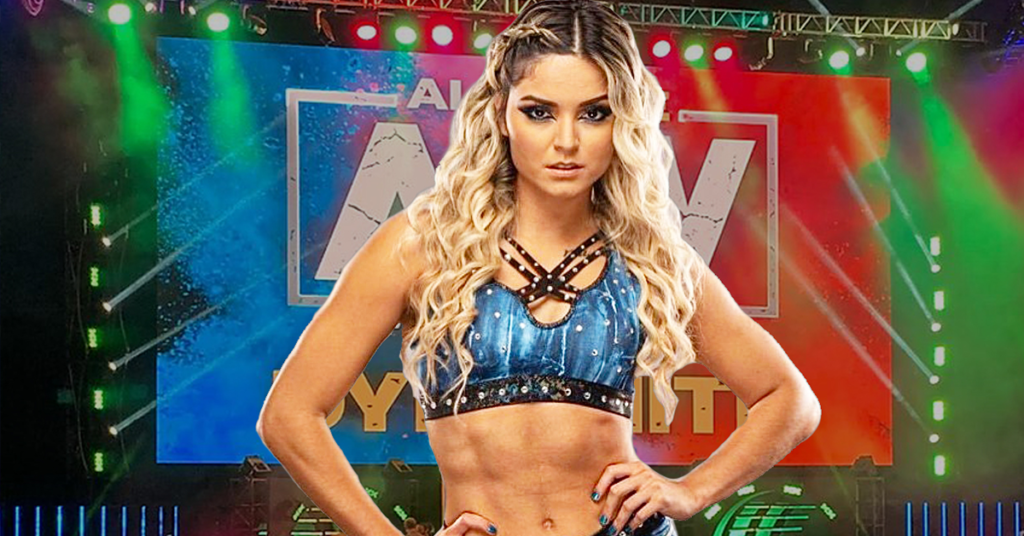 Tay Conti moved up to second in the rankings this week. She’s behind Thunder Rosa by only one loss, so one more victory could earn her a Women’s Championship match against new champ Dr Britt Baker DMD. She has earned herself the spotlight, and in my opinion if the future of AEW.

Her In Ring Improvement

When Tay Conti was released by WWE, very few shed a tear. She had shown nothing impressive in ring, and she looked like another model signed and dumped. Her judo background was neglected, and outside of a cameo at Wrestlemania 34 in the Women’s Battle Royale, did nothing of note in the company.

Even when she entered AEW, just as another body in the Women’s Tag Team Classic, very few people took much notice, or expected much. But Conti showed some flecks of ability, teaming with Anna Jay of the Dark Order. The pair became firm friends, as revealed on Conti’s AEW Unrestricted Podcast, and it showed in their tag team chemistry.

The beat the team of Nyla Rose and the former Cameron in WWE, but lost in the next round to eventual winner Ivelisse and Diamante.

Her performance impressed Tony Khan, and he handed her a deal with the company. She repaid his trust by working hard, and improving her in ring ability tenfold. Incorporating her martial arts background, she added Judo throws and hard strikes to her arsenal, and it paid divedens.

This culminated in an AEW Women’s world title match against Hikaru Shide, on Dynamie on April 21, 2021. Joined by the Dark Order and -1, the son of the late Brodie Lee, she narrowly lost to the AEW Women’s champion. It was one of the best women’s matches so far in AEW, and showed how brutal the one nicknamed “Shikira Shibata” could be.

It showed an incredible willingness to learn and improve, and toughness and grit to move on from the safety net of WWE and move out on her own.

In December 2020, Brodie Lee was announced as passing away after a long battle with illness. The wrestling world paid tribute. His family were invited to a special episode of Dynamite honouring the life of Brodie Lee.

Brodie’s young son, who was christened “-1” (His father was the “0” in the Dark Order, as he was the leader of the cult-like group. He led out the team of his favourite wrestlers. Cody Rhodes, Orange Cassidy and 10 of the Dark Order. He helped them win the match, beating Team Taz.

Since them, the pair have formed a friendship. -1 now leads Conti out every match. She revealed on her AEW Unleashed episode that ever since that show, her and Brodie Jr “Had a connection” and that she “loves the kid”. Her caring nature with the child dealing which such loss has endeared her to the crowds, and has made her a bigger star because of it.

The sky is the limit for the Brazillian starlet. For someone with so little experience, her in ring work is years ahead of her. She commands the crowd with just her facial expressions and movements, and her selling is so good it gets the crowd behind her effortlessly.

Taynara Conti kicks are brutal looking enough to earn comparison to Japanese legend Katsuyori Shibata, with her brutal kicks. Her South American charm and big blonde hair has also likened her to Columbian signer Shakiri. Portmanteau-ing the pair into the nickname “Shibata Shikira”, which fits her beautifully.

Where does she go from here?

Taynara Conti needs a feud to really take her to the next level. She’s had big matches, but with no bite behind them. A feud with Dr Britt Baker DMD is the next logical step. Britt can insult the young -1, and he can be the catalyst for Tay to run in to defend her best friend.

Taynara Conti should not win the title yet. Britt is one of the best characters on the roster, and very few can compete with her on the mic. Tay is absolutely the future, and in a year or two of progression and working promo’s she will be ready to lead the AEW Women’s division.

Tay Conti is the future of AEW.