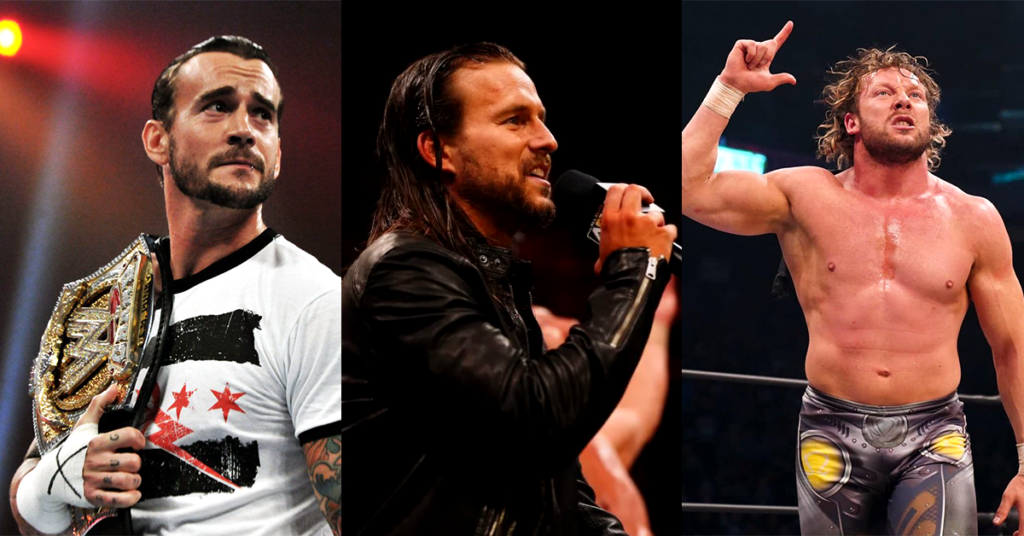 Adam Cole is the second latest addition to the AEW roster, being followed by Bryan Danielson by about 3 minutes. He debited as part of the Elite at AEW All Out, and fans immedietly began to speculate who would be his first opponent. Adam Cole dream matches are him versus just about anybody on the AEW roster. His body of work in ROH and NXT is superb, and anyone not already a fan of his in AEW is going to be very soon.

Here are just some of my dream matches for Adam Cole in AEW. He could wrestle a broom and still make it match of the night, so imagine how good he’ll be when facing such great wrestlers as the ones below.

These pair have faced before in Ring of Honor, and have always produced when it counts. With Adam Cole now part of “The Elite”, he is surely going to be first in line to take on the Hangman when he finally returns to win the AEW Championship.

While Cole shouldn’t be losing matches straight away, a feud with AEW Champion Adam Page would be ideal. Cole who has just waltzed into AEW and was taken in by the Elite, taking on the man who’s relationship with the Elite is strained to say the least would be money. Both men are incredible in ring talent, and Cole would be a great opponent for Page to be his first AEW Championship defence.

Jon Moxley vs Adam Cole is one of the biggest matches AEW could put on tomorrow if they wanted to. The cocky Cole matching up with the aggressive Moxley is a recipe for an incredible contest.

Moxley, clearly with a chip on his should at the moment, is currently in a war with whoever New Japan wants to send to AEW to fight him. He is currently awaiting a match with IWGP United States Heavyweight champion Hiroshi Tanahashi. but once that match is done, Adam Cole should be the man to face the Death Rider. A win over Moxley would show the non-NXT watching audience who exactly this cocky little man is. It would make Cole an immediate main event star, if he wasn’t already.

You can name any single wrestler in AEW. From Aaron Solo to Wardlow, every list of dream matches has CM Punk on the list. Adam Cole’s dream match list is no different.

The cocky, arrogant Adam Cole mixed with the new CM Punk who’s ready to face the young talent is a story that writes itself. Cole sees himself as better than Punk ever was. In the seven years Punk had away, Cole has become the next big thing in wrestling.

The promo’s alone would sell the feud, and would get the crowd hyped for the impending match. A pay per view main event would be the fitting stage for this pair. It could have the AEW Championship on the line if CM Punk is given a reign some way down the line.

A match with Adam Cole would also be high up on the list of CM Punk dream matches.

An Elite civil war is absolutely where AEW need to go once the team has run it’s course. The Young Bucks have lost the AEW Tag Team Championships to Lucha Brothers. In addition, Kenny Omega is still AEW Champion, his days are numbered once Adam Page comes back from paternity leave.

An Elite split with Bullet Club members Karl Anderson and Luke Gallows siding with Kenny Omega, and The Young Bucks with their friend Adam Cole, would be electric television. The matches this combination of wrestlers would pull out would be incredible. Omega vs Cole itself if a must see match. However, the six man tag team match for the rights to the Elite name (or something to that effect) would be an excellent story going forward.

As we’ve seen in his bouts with the likes of Johnny Gargano in NXT, Adam Cole can make it look like he’s murdering a man in the ring. Many times during their feud, the crowd thought that Johnny Wrestling had had it, and had no way to get up from a Undisputed Era onslaught.

Luckily, nobody is better at killing himself in the ring than Darby Allin. Adam Cole’s superkicks would make it look like Allin’s head was falling off. I don’t even want to see how Darby Allin will take a Panama Sunrise. I’m imagining him spiking his head through a table off of a helicopter while Sting yells in the corner. It’s just Darby Allin things.

The ultimate fantasy booking match that definitely will not happen. CM Punk has said that AJ Lee is unlikely to return to wrestling with AEW, but that doesn’t stop the fantasy booking. The Adam Cole dream match in AEW tagging with his girlfriend, Dr Britt Baker DMD, should involve AEW’s biggest star, CM Punk. CM Punk is married to AJ Lee, the former Diva’s champion and legend of WWE women’s wrestling.

While intergender matches are rare in AEW, this one could be one of the best. The last high profile one was Cody Rhodes & Red Velvet vs Shaq & Jade Cargill. That match exceeded all expectations and Cargill look like a huge star. This match can do the same for any wrestler in the match.

Britt Baker has recently wrestled at AEW All Out, where she retained to stop the Kris Statlander AEW Women’s Championship dream

An extension to the Elite civil war storyline mentioned previously. Once Cole and the Young Bucks have taken over the Elite name, a feud with Death Triangle is definitely on the cards. Comprised of PAC, Penta El Cero M and Rey Fenix, Death Triangle are one of the best trios in all of AEW. In ring, nobody comes close to them, except maybe the men in the Elite.

The Young Bucks have a long, six year history with the Lucha Brothers. Their cage match at All Out was in my view the best cage match of all time. Add in the talents of two of the best storytellers in the ring, PAC and Adam Cole, then you have one of the biggest trios dream matches in AEW.

This doesn’t need explaining. Elite implosion. Two of the best in the ring in the world. Former IWGP Heavyweight Champion versus former RoH and NXT Champion. Both at the top of their game, in a blood feud over the right to be called Elite.

Adam Cole is the winner. He is the Elite and will put down Kenny Omega. But this match will add so much story and emotion. Kenny Omega will spiral out of control. He’ll be off TV, to heal injuries and to deal with his failures. He’ll fall into a depression, dealing with the loss of his friends and his identity.

Then, Hangman Adam Page will show up and help out his friend. Because his arch will be complete, and he will drag him out of depression and back into The Cleaner that we know and love.

Obviously Tony Khan will book something infinitely better because he is a genius but that’s just an idea!