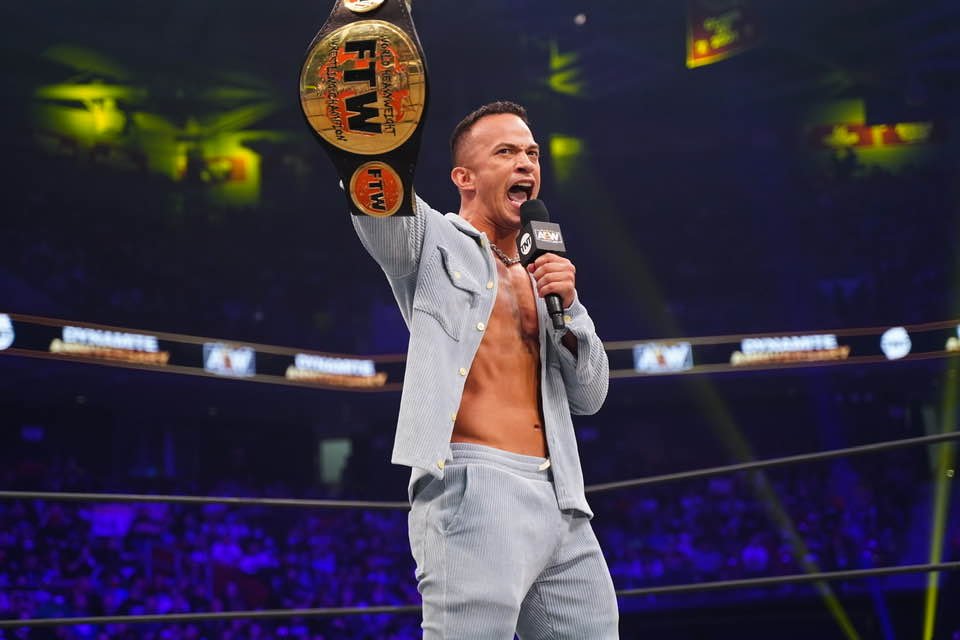 Is Ricky Starks AEW’s next big star? Keep reading to find out

Every wrestler has to start somewhere on the path to making their dreams into reality, whether it be a church basement, wrestling school, bingo hall, etc.

From there, those wrestlers work their way up to the peak of their dreams. For several, that is a career in World Wrestling Entertainment (WWE) or more recently All Elite Wrestling (AEW), NJPW, or even IMPACT Wrestling.

But sometimes the journey is just as crucial as the destination. Recently we  take a look at the charismatic AEW wrestling that starts with swagger for days, “Absolute” Ricky Starks.

The revolution is televised, if there’s a one AEW wrestling star that’s the definition of Charisma, it’d be Ricky Starks. Since their first appearance for AEW back in June, he has made a huge impact, even aligning himself with Team Taz.

Ricky Starks is currently a part of one of the most prominent groups in the company. Even so, Starks is all but destined to become a big start on his own. To better under where the Ricky Starks is now, it is vital to go back to the starting.

Ricky Starks start their wrestling career in 2013. During his early years, he made many appearances for WWE as an enhancement of great talent and jobber on Smack Down, RAW, and NXT. Apart from his World Wrestling Entertainment appearances, he wrestled for  Inspire Pro Wrestling and Anarchy Championship Wrestling.

In late 2018, he made his NWA debut and lost. In 2019, Ricky Starks make his return and defeated Trevor Murdoch. After a couple of months, at the hard times event, he becomes the new NWA Television Champion. A couple of weeks later, Starks lost the title to Zicky Dice.

In June, Ricky Starks face Cody Rhodes during the TNT open challenge and lost. After the match, he was announced as part of the roster and signed with the AEW. In July, he began teaming up with Brian Cage to face Jon Moxley and Darby Allin. He officially joined Team Taz with Brian Cage. In Nov, Powerhouse Hobbs joined the stable.

At Winter is coming, Ricky Starks and Hobbs lost to Rhodes and Allin. At Revolution, Cage and Starks lost to Darby Allin and Sting. At Double of Nothing, Ricky Starks interfered in a match between Adam Page and Brian Cage. At Fyter Fest, Starks defeated Brian Cage to win the FTW title. After feuding with Cage, the stable feuded with Lio Rush and Dante Martin.

As All Elite Wrestling continues to prove its ability to create big stars, with Wheeler Yuta new instance, the promotion’s next big wrestling start should be Ricky Starks.

As a member of Team Taz, he has shown his wonderful talent during his near 2 year run in AEW, but it is time to take some things to next level, and the promotion should force the FTW champion and let him become the big star Ricky Starks is very capable to become.

Whether it is his great promos, his superb in-ring work, or even his entertaining commentary on Rampage, he has shown he can do just about anything, and his rise to the peak of AEW feels inevitable.

Though his tie, one thing has been extremely clear, he just oozes Charisma. There is clearly no denying he has the IT factor, and Ricky Starks has constantly been a standout star in any show he is part of.

The former NWA start feeling like a super star acts like a wrestling star and seems like a star, and it is only a matter of time before he is booked like a star.

Debuting as a key member of team Taz, Ricky Starks’s insane Charisma eventually played a part in him outshining the actual base point of the group Cage and the Machine was no longer the most vital member of the faction.

Instead, he outgrew Brian Cage, leading to the former impact Champion’s exile from the stable, offering the 28 years old priority. in modern time wrestling, too often, wrestlers do not feel genuine, in their characters, particularly the outlandish heels, but he does His incredible Charisma in the role feels natural as well as considering he is still on the right side of thirty and the sky truly is the limit going forward for him.

You can have entire the Charisma in the world, but if you are not a good worker inside the squared circle, there is a limit to what you can achieve in All Elite Wrestling. The promotion heavily prioritizes the in-ring job of its opponents, but fortunately, he is just as talented in-between the ropes as he’s outside of the ring.

His match with Brian Cage, Shane Swerve, and Jay Lethal have all shown just how wonderful the FTW champion is in the ring, and he is put on a few incredible bouts throughout his time in AEW.

There are some truly superb stars situated at the peak of the AEW’s main event scene, and eventually, seeing him engage with the likes of Bryan Danielson, CM Punk, and Adam Cole in the arena is an exciting prospect for every fan.

Despite being involved in many different storylines throughout his stay in AEW, he is yet to disappoint the audience, with every feud he is involved in entertaining fans largely down to his supreme work.

Feuds of Team Taz’s with Sting and Allin, Cage, and recently with Strickland and Lee, have all been a few of the highlights of any show they are features on, and he is a big factor in that. He is both hilarious on dynamite and a microphone – pun intended – in the ring.

What do you think of Ricky Starks in AEW? Let us know in the comments or click below to read more